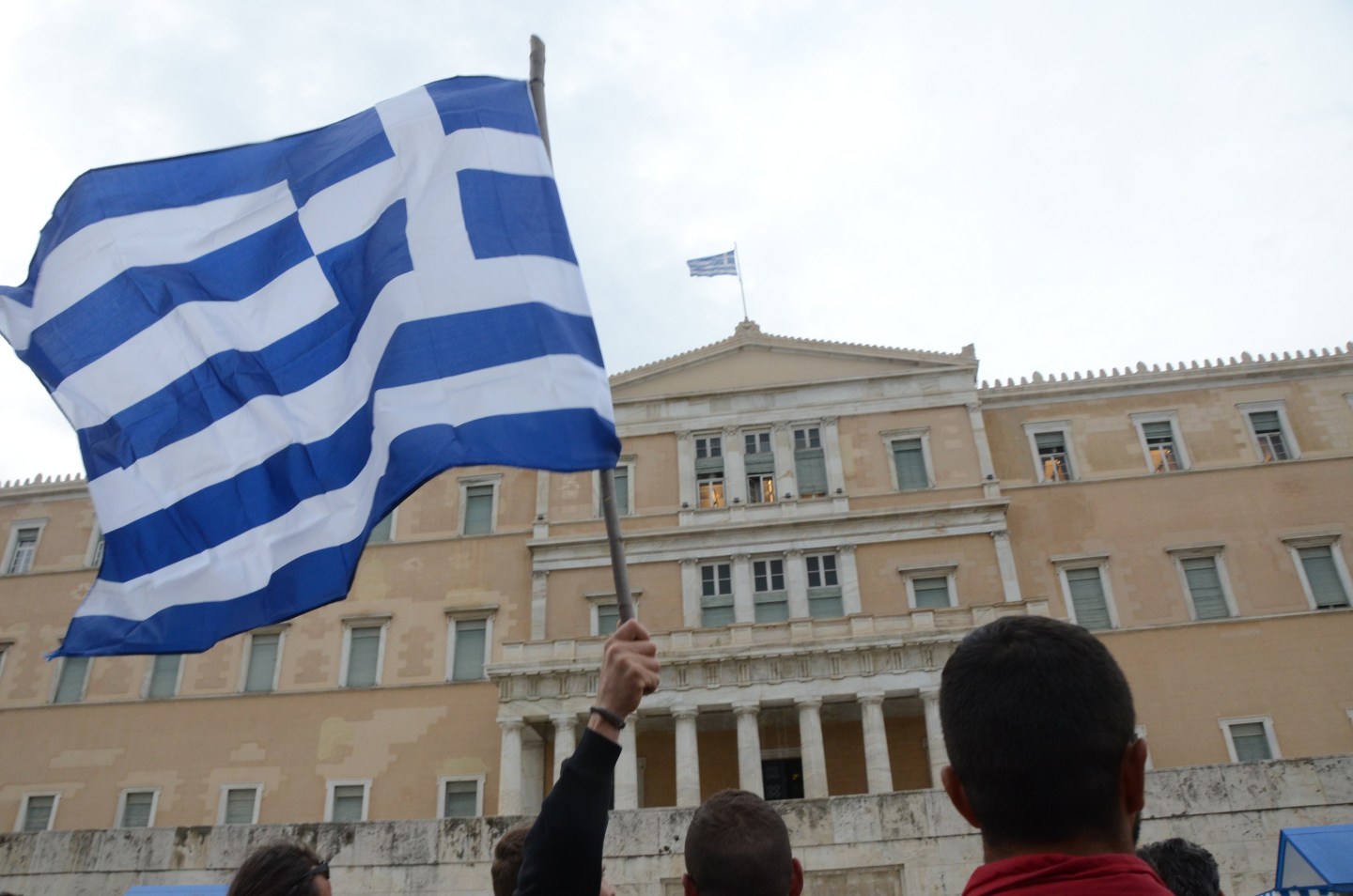 At a meeting of euro-area finance ministers in Brussels on Wednesday that lasted late into the night, officials struck a preliminary deal with Greece to ease the country’s debt burden, paving the way for a 10.3 billion-euro ($11.5 billion) aid payout. While finance ministers called it a breakthrough deal, Greece is still on shaky terms, as officials left out important details up for discussion after Germany’s federal election next year.
It’s time Europe forgives a big share of Greece’s debt and realizes that the benefits of bailing out the debt-troubled country overwhelmingly outweigh the costs, particularly as Britain rethinks its membership in the European Union.

Next month, voters in Britain will decide whether the country should stay in the 28-member European Union. Britain can exit the EU pretty easily. Unlike Greece, its economy does not run on the euro and it operates under an independent central bank. That doesn’t mean, however, that Britain’s exit wouldn’t impact the EU; in fact, the implications could be far-reaching in that it would set a precedent for other countries, including Greece, to leave, too. Which is why Europe should do everything it can to help Greece pay off its debt.

If Britain exits the EU, I predict a significant decline in the value of the euro against the US dollar. Although this has the effect of making EU goods more attractive to the US, it has the reverse impact for US goods in Europe. This could start a financial cascade and a shock leading to recessions within Europe (i.e. the few countries that aren’t already in or near an economic recession.) Europe does not want this, as the last thing Germany, Italy and Spain would want is to scare off investors with a currency collapse. As a result, Europe’s incentive for Greece to stay in the EU may become more valuable to Europe than the billions of euros Greece owes to its creditors. Thus, it makes economic sense for Germany and other countries to forgive a significant share of Greece’s debt.

While Wednesday’s deal went the extra step in that the euro zone would give Greece debt relief in 2018 if necessary to meet its payments burden, the agreement is incomplete. German Finance Minister Wolfgang Schaeuble avoided any immediate commitment (to rescheduling Greek debt) that would have required him to secure approval from a skeptical parliament in Berlin before a general election next year.

Germany might worry about internal politics, but it could prove more beneficial to Germany to give Greece some extra help. Greece is one of the EU states acting as a vestibule for Syrian refugees, thus buffering the economic shock to Northern Europe. By geographical accident, the country is central to the refugee crisis and, as a result, is bearing a significant cost. These costs come in a several flavors – the monetary costs of hosting and policing refugee camps; the non-monetary costs in security issues and anxieties.

Consider this counterfactual. Suppose Greece had not run up significant debt and had not defaulted on multiple loans with Germany and the IMF. It is reasonable to suggest that at this point, Germany, the UN, other countries throughout Europe would be throwing money at Greece to help take in the influx of refugees and help slow their northern migration. Europe might consider debt relief as the payment they would be making to secure refugees. Not to suggest that Greece wouldn’t continue to be a solid citizen of the world if it left the EU, but there’s no need to take this chance.

It would therefore make sense for Germany to forgive a lion’s share of Greece’s debt, 50% perhaps, in advance of the Brexit vote in order to solidify the EU (note: it is not clear that this is constitutionally allowable from Germany’s perspective, but it is worth investigating).

At this point, it would behoove all the players to examine the marginal costs and benefits of the decisions about to be made. A stronger European Union (with Britain and Greece) has a smaller chance of suffering another financial shock and global recession. Greece in the European Union is likely to continue its humanitarian aid to refugees. Forgiving Greece’s debt could prove to be a small price to pay to solidify the economic playing field.

Thomas More Smith is an associate professor of finance at Emory University.