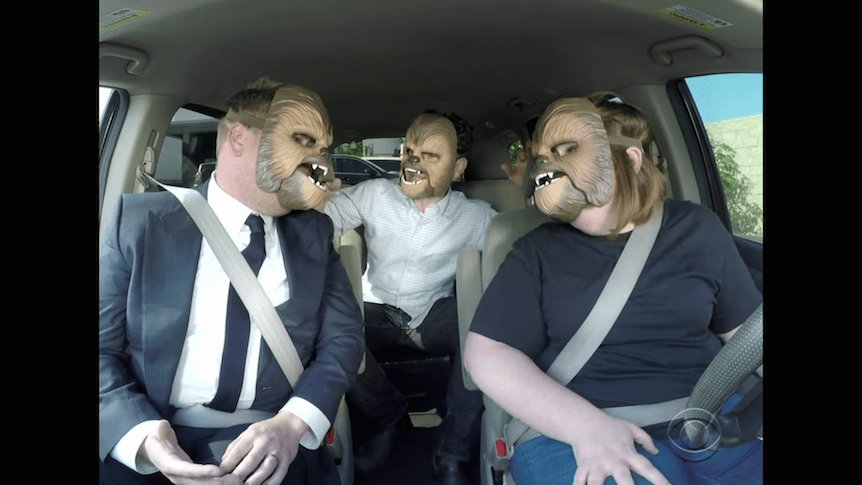 The viral sensation that is “Chewbacca Mom” continues to provide free advertising for Kohl’s, Hasbro, and the Star Wars franchise. Now, TV is getting in on the action with the help of a late-night talk-show host.

First, there was the original video featuring Dallas-area shopper Candace Payne laughing hysterically while wearing an electronic Chewbacca mask she bought at a Kohl’s (KSS). The video went viral this week to the tune of more than 140 million online views on Facebook (FB). Then millions more watched a video posted online by Kohl’s, in which employees showered Payne and her family in free Star Wars products and $2,500 in gift cards from the store.

Now the Internet is showing more love to Chewbacca Mom after she appeared on CBS’ (CBS) The Late Late Show, recreating her viral hit with host James Corden and Star Wars: The Force Awakens director J.J. Abrams in tow. The latest video clip, which already has more than 7 million views on YouTube after airing on CBS Monday night, features Payne driving Corden to work while she and Abrams debate the finer points of their respective Chewbacca roar techniques.

Watch the clip from The Late Late Show here:

As Fortune noted earlier this week, the Chewbacca Mom’s Internet celebrity has meant a boatload of free online advertising for Kohl’s, with Payne describing a positive customer experience in her first video. Meanwhile, the Chewbacca mask featured in the videos (and made by toy giant Hasbro (HAS)) quickly sold out at Kohl’s stores as well as at other retailers, including Walmart (WMT) and Toys R Us.

As for the Star Wars franchise, it’s not as if The Force Awakens really needs any additional advertising at this point. The Walt Disney (DIS) film set box-office records following its December 2015 release, pulling in more than $2 billion at the global box office before dominating the home entertainment market with last month’s release on DVD and Blu-ray.