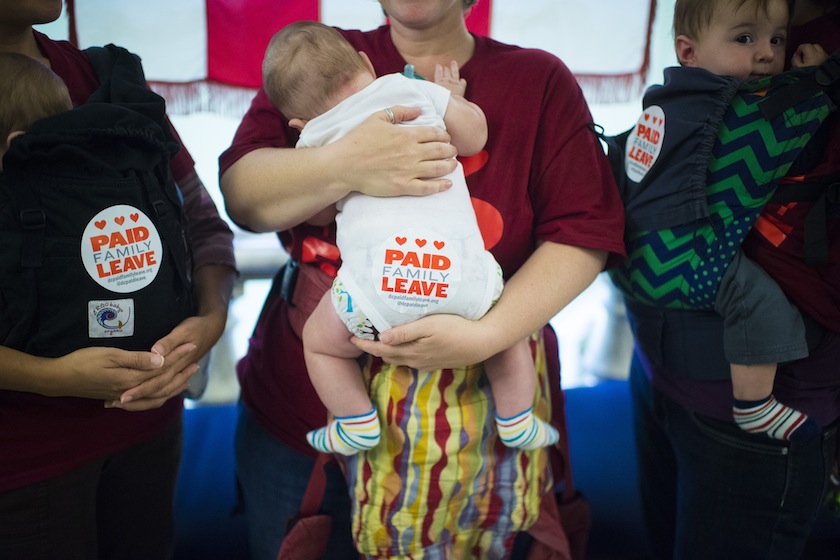 Time off from work to care for a child or relative is codified in federal law. Now, an overwhelming majority of Americans 40 and older want that time away from the job to be paid.

At least 19 states are considering paid family leave laws, but only three have active programs. New York, the latest to approve it, will launch its program in 2018.

“There is a lot of interest and a lot of momentum,” said Ellen Bravo, executive director of Family Values @ Work, an advocacy group. “We hope that over the next five years a critical mass of states will win these policies.”

Bravo said the state wins are paving the way for a federal law.

The federal Family and Medical Leave Act provides for up to 12 weeks of unpaid leave for most workers to care for a newborn or adopted child or a spouse, child or parent who is seriously ill.

A bill to make that leave paid was introduced in the Senate last year but has gone nowhere in Congress. Among the presidential candidates, both Hillary Clinton and Bernie Sanders have voiced support for paid family leave. Donald Trump hasn’t offered a clear opinion.

“I support (paid family leave) because I feel that in the U.S., we need to realize that employees, or the workers, can’t really do the best job possible if you are worrying about a family member,” said Mary Jo Morelli, of the Detroit area.

Morelli, 52, said she expects that someday she’ll need time off to care for her aging mother and in-laws who are now in their 80s.

Paid family leave works like insurance and is funded via mandatory contributions from workers’ paychecks.

In New York, about $1 a week will be deducted. Workers could receive a portion of their pay for up to eight weeks in the program’s first year. That will increase to 12 weeks, double what other states offer.

Most workers use the benefit to care for a newborn or adopted child, according to data from the California, New Jersey and Rhode Island programs. Workers also can use it to care for an aging parent, spouse or other relative.

About a quarter of older workers who support paid family leave said they would be hesitant to ask for time off. Of those, nearly half worried it would negatively affect their future salary or promotion opportunities. About 4 in 10 said they felt pressured by employers not to take time off.

“Workers are, and for good reason, nervous about retaliation from their employer,” said Ruth Milkman a sociology professor at the CUNY Graduate Center who has studied paid family leave.

Some people also cited the need for their full salary.

Farmworker Adan Lopez said he supports the law but it would be impossible to live on just 55 percent of his wages, the benefit in California. He makes about $500 per week and the rent for a two-bedroom apartment in Salinas, California, is about $1,800 a month. During lean times, he said, his family is forced to share an apartment with others.

California will raise its weekly benefit in 2018 to 60 percent or 70 percent of wages, depending on earnings. The state also is pushing to increase awareness of the decade-old program.

The AP-NORC poll found that about 44 percent in California had not heard of the law.

In New York, advocates are working with state officials to educate people, especially low-income residents and minorities, about paid family leave. “Passing the law was step one,” said Dina Bakst, co-founder of A Better Balance: The Work and Family Legal Center.

As the only unmarried sibling in his family, Tim Mitchell, 51, of Portales, New Mexico, cared on-and-off for his grandmother and, later, his mother. He said he’d support any help for caregivers, who, like him, struggle financially later in life. “What I did was a heck of a sacrifice,” he said.

The AP-NORC Center for Public Affairs Research survey was conducted Feb. 18 through April 9, with funding from the SCAN Foundation. The nationally representative poll involved landline and cellphone interviews with 1,698 Americans age 40 or older. It has a margin of sampling error of plus or minus 3.4 percentage points.