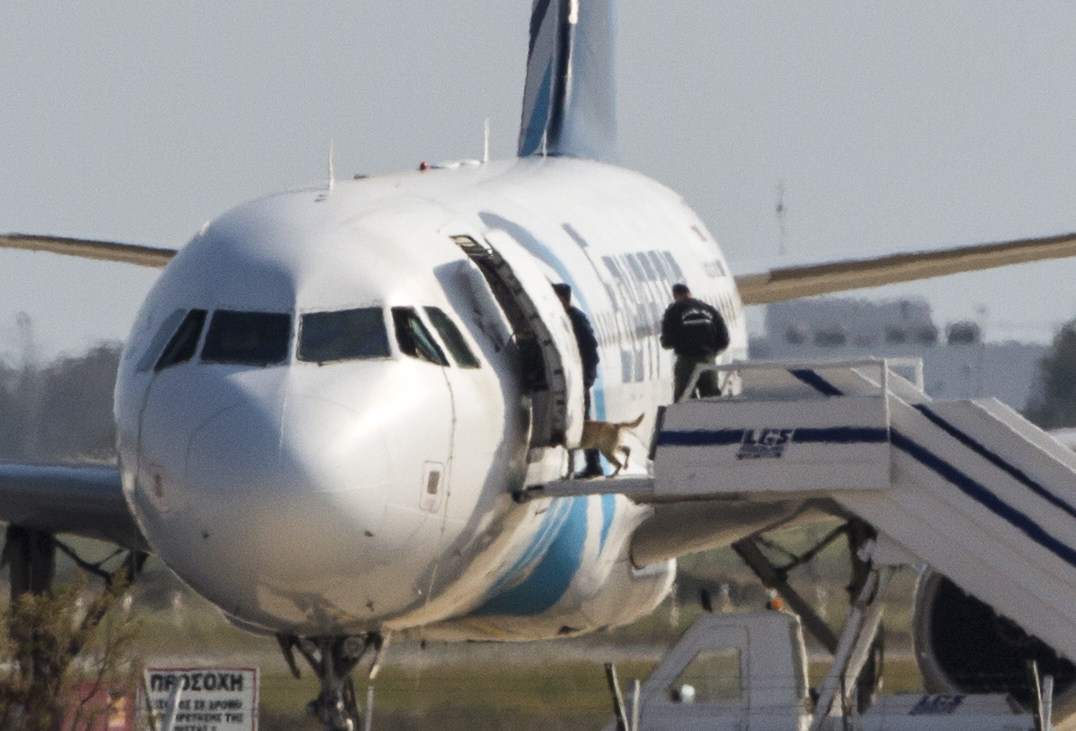 Search teams scoured the Mediterranean Sea on Friday, hunting for wreckage of an EgyptAir jet carrying 66 people that disappeared in a crash that Egypt said may have been caused by a terrorist attack.

No group had claimed responsibility more than 24 hours after the disappearance of flight MS804, an Airbus A320 that was flying from Paris to Cairo.

Three French investigators and a technical expert from Airbus arrived in Cairo early on Friday to help investigate the fate of the missing plane, airport sources said.

Egyptian Prime Minister Sherif Ismail said it was too early to rule out any explanation for the disaster, while the country’s aviation minister said a terrorist attack was more likely than a technical failure.

There was confusion over the discovery of possible debris, with Egyptian officials initially saying Greek authorities had found “floating material” and life jackets likely to be from the plane.

However, EgyptAir Vice President Ahmed Adel told CNN late on Thursday that the wreckage had not been found.

“We stand corrected on finding the wreckage because what we identified is not a part of our plane. So the search and rescue is still going on,” Adel said.

Greek defense sources told Reuters the material was discovered in the sea 230 miles south of the island of Crete.

Egyptian President Abdel Fattah al-Sisi ordered the civil aviation ministry, the army’s search and rescue centre, the navy, and the air force to take all necessary measures to locate debris from the aircraft.

In a statement issued by his office, Sisi also ordered an investigative committee formed by the civil aviation ministry to immediately start investigating the causes of the plane’s disappearance.

Officials from multiple U.S. agencies told Reuters that a U.S. review of satellite imagery so far had not produced any signs of an explosion aboard the EgyptAir flight.

The U.S. officials, who spoke on condition of anonymity, said the conclusion was the result of a preliminary examination of imagery and cautioned against media reports suggesting the United States believed a bomb was responsible for the crash.

They said the United States has not ruled out any possible causes for the crash, including mechanical failure, terrorism or a deliberate act by the pilot or crew.

Amid uncertainty about what brought down the plane, Los Angeles International Airport became the first major U.S. air transportation hub to say it was stepping up security measures.

Greece deployed aircraft and a frigate to search for the missing plane. Egypt said it would lead the investigation and France would participate.

According to Greece’s civil aviation chief, calls from Greek air traffic controllers to MS804 went unanswered just before it left Greek airspace, and it disappeared from radar screens soon afterwards.

There was no official indication of a possible cause, whether technical failure, human error or sabotage.

Ultra-hardline Islamists have targeted airports, airliners and tourist sites in Europe, Egypt, Tunisia and other Middle Eastern countries over the past few years.

The aircraft was carrying 56 passengers, including one child and two infants, and 10 crew, EgyptAir said. They included 30 Egyptian and 15 French nationals, along with citizens of 10 other countries. A320s normally seat 150 people.

At Cairo airport, a man sat on a brown leather couch crying with his hands covering his face. “How long will Egypt live if human lives are so cheap?” he said.

The mother of a flight attendant rushed out of the VIP hall where families waited in tears. She said the last time her daughter called her was Wednesday night. “They haven’t told us anything,” she said.

With its archaeological sites and Red Sea resorts, Egypt is a traditional destination for Western tourists. But the industry has been badly hit by the downing of a Russian Metrojet flight last October, in which all 224 people on board were killed, as well as by an Islamist insurgency and a string of bomb attacks.

Other countries offered to help in the investigation, including the United States, where engine maker Pratt & Whitney is based.