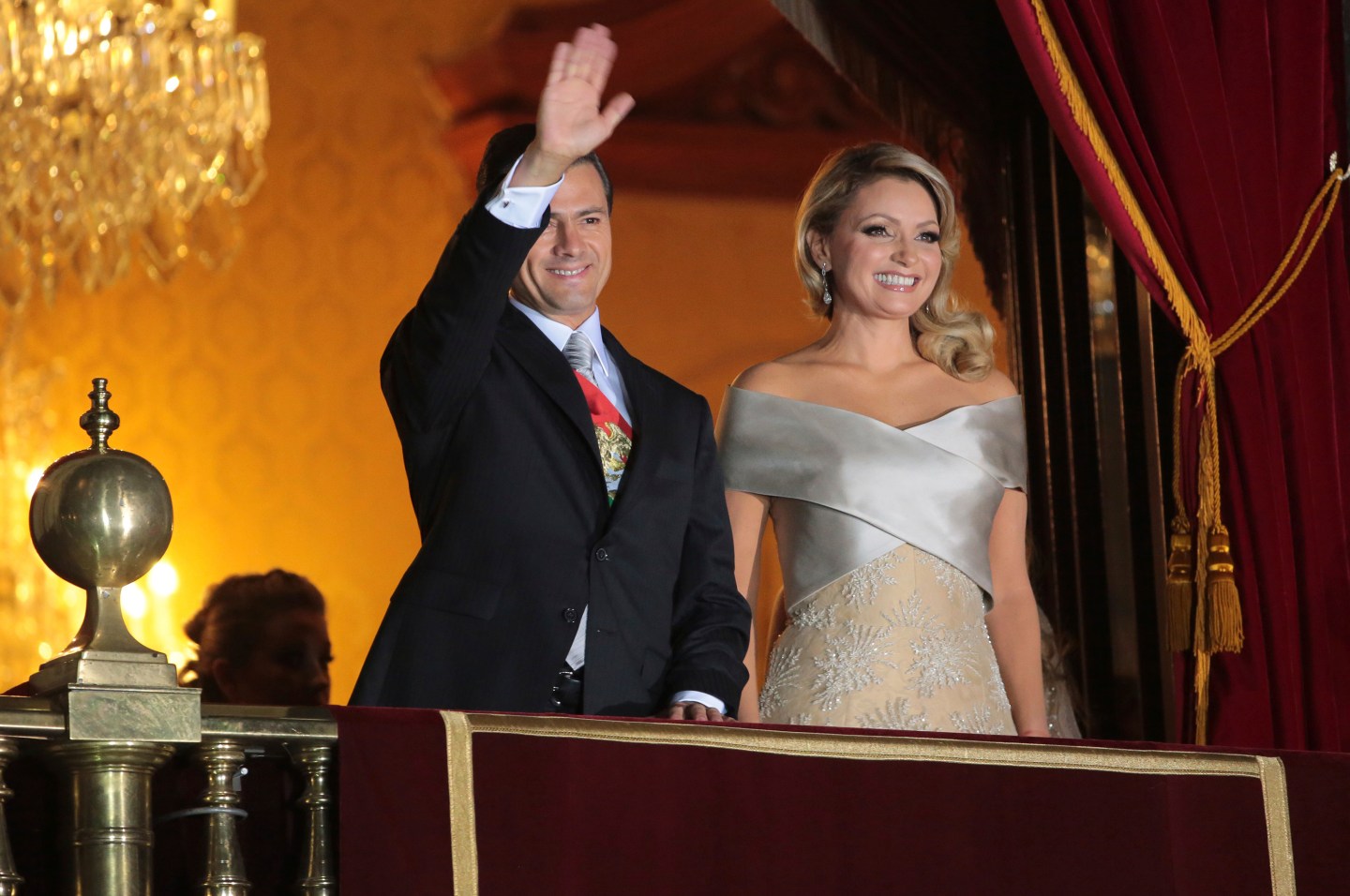 MEXICO CITY, MEXICO - SEPTEMBER 15: Mexico's President Enrique Pe?a Nieto (L) and his wife first lady Angelica Rivera greet the crowd after giving the traditional 'El Grito' during the anniversary of the Grito de Dolores made by the priest Miguel Hidalgo in 1810 to begin the struggle for independence against Spain as part of Mexican Independence celebrations at Palacio Nacional on September 15, 2015 in Mexico City, Mexico. (Photo by Hector Vivas/LatinContent/Getty Images)
Hector Vivas/STR LatinContent/Getty Images

President Enrique Pena Nieto proposed to legalize same-sex marriage in Mexico on Tuesday, a move that would enshrine on a national level a Supreme Court ruling last year that it was unconstitutional for states to bar such couples from wedding.

If it is approved, Mexico would become the fifth country in Latin America to make same-sex marriage legal. The announcement was hailed by LGBT activists and criticized by church officials in Mexico, which is home to the second-largest Roman Catholic population on the planet.

Speaking at an event on the International Day Against Homophobia, Pena Nieto said he signed initiatives that would seek to amend the constitution and the national civil code.

Pena Nieto said he wants to change Article 4 of the constitution to clearly reflect the Supreme Court opinion “to recognize as a human right that people can enter into marriage without any kind of discrimination.”

“That is, for marriages to be carried out without discrimination on the basis of ethnicity or nationality, of disabilities, of social or health conditions, of religion, of gender or sexual preference,” he added.

Pena Nieto’s Twitter page and other government Twitter accounts were changed to include the rainbow colors as he made the announcement.

A two-thirds majority vote in congress is required to amend the constitution. Pena Nieto’s party and allies control about half the seats in both houses, and the measure could also pick up support from the leftist opposition Democratic Revolution Party.

It would then need to be ratified by a simple majority of states before going to the president for his signature.

The Rev. Hugo Valdemar, spokesman for the Catholic Archdiocese of Mexico City, urged lawmakers to listen to their “conscience” and oppose the initiative.

“Marriage has some very concrete aims which, of course, two people of the same sex do not fulfill,” Valdemar said, referring to procreation.

He called Pena Nieto’s initiative a “distraction” in a country where “there are more serious issues that should be attended to” such as violence and corruption.

About 80 percent of Mexicans are Catholic, though only about 15 percent to 20 percent regularly practice the faith, said Andrew Chesnut, chairman of Catholic studies at Virginia Commonwealth University.

He added that a recent Pew survey said Mexicans’ acceptance of gay marriage and LGBT issues in general closely mirrored views in the United States, where same-sex marriage was legalized by the Supreme Court last year.

The president’s announcement “is just of monumental significance,” Chesnut said. “It really is symbolic of the rapidly waning, eroding influence of the Catholic Church on both politics and the social front.”

Gay marriage is already legal in some parts of Mexico such as the capital, the northern state of Coahuila and Quintana Roo state on the Caribbean coast. Adding it to the constitution and the civil code would expand gay marriage rights across the country.

Last June, the Supreme Court ruled it was unconstitutional for Mexican states to ban same-sex couples from getting married. But the decision did not specifically overturn state laws, meaning couples have had to sue in court in each particular case.

“I think it sends a very clear message of respect and against discrimination toward sexual diversity,” Brito said. “If it is enshrined in the constitution and the Supreme Court has established a precedent on this, it would seem just a question of time before all (government) entities across the country recognize equal marriage. … I think this is a battle that has been won.”

Twenty-three countries around the world have legalized gay marriage, according to Pew Research. Argentina became the first in Latin America to do so in 2010, followed by Brazil and Uruguay in 2013 and Colombia earlier this year. Chile allowed same-sex civil unions last year. The U.S. island territory of Puerto Rico also legalized gay marriage by executive decree after the U.S. Supreme Court ruling.

“This, in tandem with Colombia, which is still close to about 80 percent Catholic and is usually kind of looked to as the most devout Catholic nation in Latin America … it’s amazing,” Chesnut said.