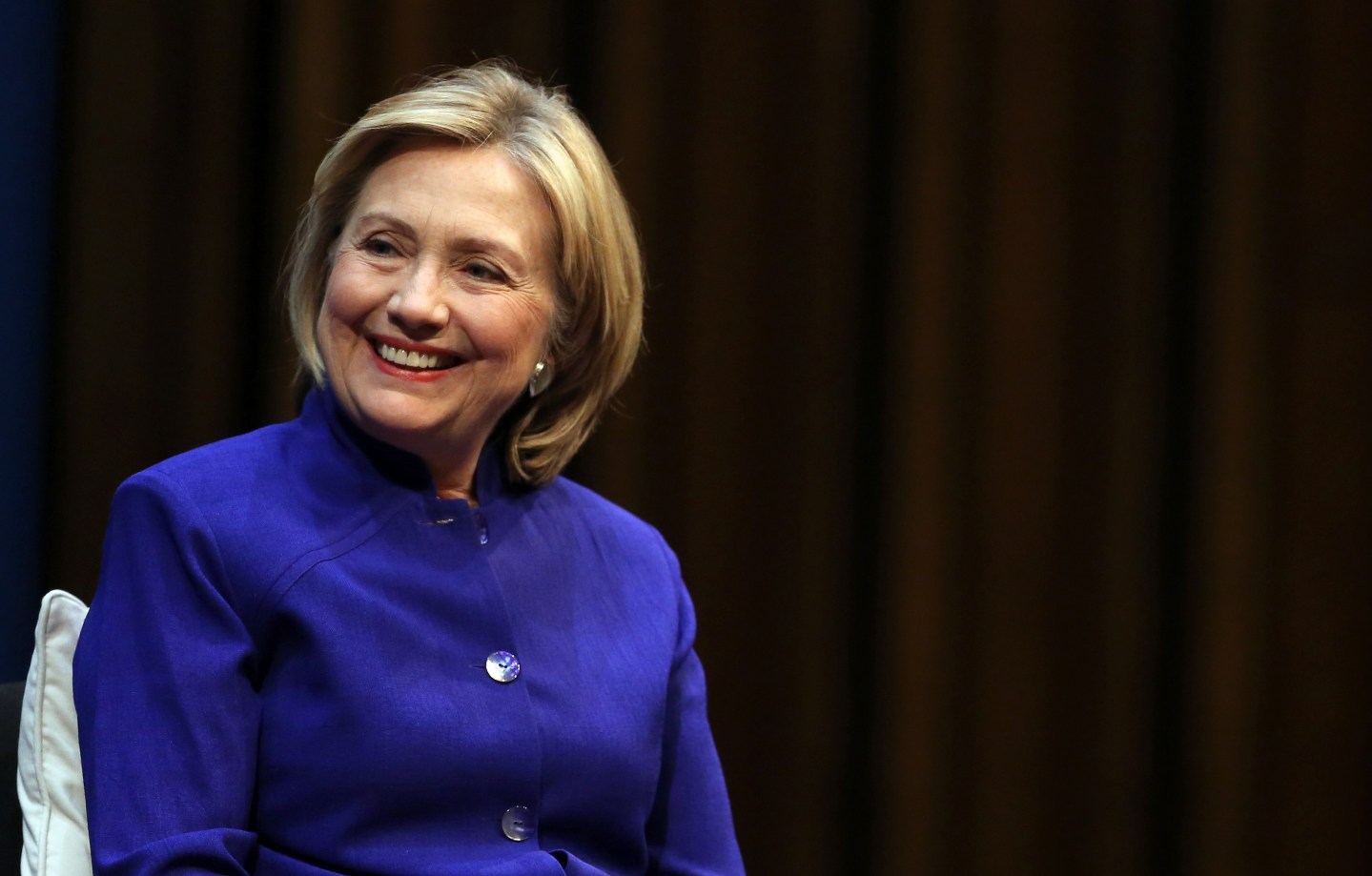 Every year for more than two decades, the conservative watchdog group Judicial Watch has filed scores of Freedom of Information Act (FOIA) requests for documents from the federal government, many in pursuit of a favorite target: Bill and Hillary Clinton. Now, with FOIA case No. F-2013-08812, they may finally have hit the political jackpot.

Two close Clinton aides, Huma Abedin and Cheryl Mills, will testify under oath this month and next, Judicial Watch announced today. The judge in the case said earlier this month he may force Clinton herself to testify after the first round of interviews is completed. That has set up the prospect of the Democratic front-runner for the White House facing off under oath against one of her most dogged pursuers as early as July, just months before the November election.

It is telling that Judicial Watch’s potentially big win has come not from any dark conspiracy it has uncovered, but from what it has not. The judge has limited the group to a narrow line of inquiry designed to answer a simple question: why did Clinton set up a private server and use it for all her work e-mails as Secretary of State? Clinton says it was matter of convenience, but over the course of the trial, the judge has given credence to the allegation that she was intentionally thwarting the federal laws ensuring government transparency.

And that’s why the messy, drawn out drama over case No. F-2013-08812 matters. Clinton is no stranger to allegations that amount to nothing. From Whitewater to Benghazi, her political opponents have tried and failed to find evidence that she committed a crime. A law enforcement official familiar with the separate FBI investigation into how classified information got onto her private server says there is little evidence of a crime there either, though the probe is continuing.

But Clinton may have violated civil law if she intentionally thwarted FOIA or the Federal Records Act, which requires public officials to take a number of steps to preserve and make public their work related documents, according to experts and judges handling the matter in the courts. Which means that for many voters it will be Clinton’s trustworthiness that is on trial in the FOIA case.

Judicial Watch, whose over 20 lawyers and researchers specialize in government records requests, first filed the case that may snare Clinton three years ago. It was seeking information about the simultaneous employment of Hillary Clinton’s long-time aide, Huma Abedin, by the State department, Bill Clinton’s charitable foundation and a consulting firm that built its business providing access to the Clintons. In response, the State department produced eight documents and declared the case closed. That’s standard fare for requests under FOIA, a 1966 law that courts have limited in favor of the government, and Judicial Watch accepted the result.

But in March 2015 The New York Times and the Associated Press broke the story of Clinton’s exclusive use of a private server for her work e-mails so Judicial Watch sued the department which agreed, in a rare concession, to reopen the case. By the end of last year, State had produced another 38 documents in a series of releases. State tried again to close the case, but this time Judicial Watch fought back. It was clear, says Tom Fitton, Judicial Watch’s president, that “Mrs. Clinton didn’t want anyone looking at her e-mails.”

In February, the federal judge in the case, Emmet Sullivan, a Bill Clinton appointee, said the “constant drip” of newly discovered documents from the department “needs to stop”–the public deserved to know once and for all if the officials conducting the FOIA search had gained access to all government records from Clinton’s time as Secretary of State. The only way to determine that, Sullivan said, was to get testimony from Clinton’s aides, State department officials and possibly Clinton herself to determine whether there had been a deliberate attempt to thwart FOIA. Requiring sworn testimony in FOIA cases is unusual, Sullivan conceded, but he said there was a “reasonable suspicion of bad faith“ on the part of the State department.

Sullivan gave two main reasons for that suspicion. He noted that in 2011, two years after the private e-mail system was set up, the State department offered to get Clinton a State-issued Blackberry with Clinton’s identity masked for work emails. But when a State official informed Abedin that the work phone would be subject to FOIA, she responded that the arrangement “doesn’t make a whole lot of sense.” The Clinton campaign says Abedin opposed the masking of Clinton’s identity, not the exposure to FOIA.

Sullivan also was exasperated by a January State Inspector General’s report that found that another organization had asked in 2012 for information about work e-mails Clinton had sent or received on a private account; State told the group there were none. The IG found the officials responsible for handling that FOIA request didn’t know about the private server, but that Clinton’s chief of staff Cheryl Mills, who had helped set it up to begin with in 2009, did know about the FOIA request. A lawyer for the firm representing Mills, Hal Brewster, disputed the accuracy of details in this story when asked to respond to them, but declined to address them directly.

Legal experts are as frustrated as Sullivan is. “She shouldn’t have been working on a non-.gov system to begin with,” says Jason R. Baron, former director of litigation at the National Archives, who says her private server was nearly unprecedented. And when she left the department, she was obligated under the Federal Records Act to turnover a copy of all her work documents to the State department, something she only did 21 months later when the server’s existence became known. “The effect of having your own private e-mail system is to limit the public’s access to records of official business and that’s unfortunate,” Baron says.

But that doesn’t mean it was a crime. The remedy for not complying with FOIA in most cases is just to hand over any documents you should have to begin with. Failing to comply with the Federal Records Act by not giving work documents to the National Archives can be a criminal misdemeanor, but the Supreme Court set a high bar for punishment in 1980 when then-Justice William Rehnquist said Henry Kissinger didn’t need to return phone transcripts he took home when he stepped down as Secretary of State in 1976. In the Judicial Watch case, Sullivan has threatened to subpoena Clinton’s server and any copies of its contents that have been recovered so that State can inspect them for any work documents.

For those who lived through the 1990s, the battle over Clinton’s server unfolds against a rich historical backdrop. As an unelected first lady, Clinton earned a reputation for erecting and maintaining what she called “a zone of privacy” around her life. She also became subject, as few political figures have, to an industry of thinly sourced conspiracy theories about her public service and private life.

Which is why the State department says it is not subterfuge, but inundation, that is behind its lousy record of responding to FOIA requests like the Judicial Watch one. From 2009 to 2013 when Clinton was Secretary of State, the number of FOIA requests averaged around 18,500 a year, up from less than 6,000 in the years before she took office, while the number of full time staffers handling them stayed steady between 130 and 150. “We were working under outrageous conditions,” says one former official responsible for the process. Staffers burned out in under two years because “Their job was a nightmare,” the official says. Since the revelation of Clinton’s unusual server arrangement the number of FOIA requests has spiked again to more than 22,000.

American politics didn’t always operate this way. In the 1980 Supreme Court case that exonerated Kissinger for taking work records out of the State department, Justice John Paul Stevens wrote that “it would be unseemly” to take sworn testimony from agency officials about their “subjective motivation” for not complying with FOIA or the Federal Records Act as they struggled with “the flood of paper that threatens to engulf today’s bureaucracy.” That kind of reasoning seems quaint 36 years later.