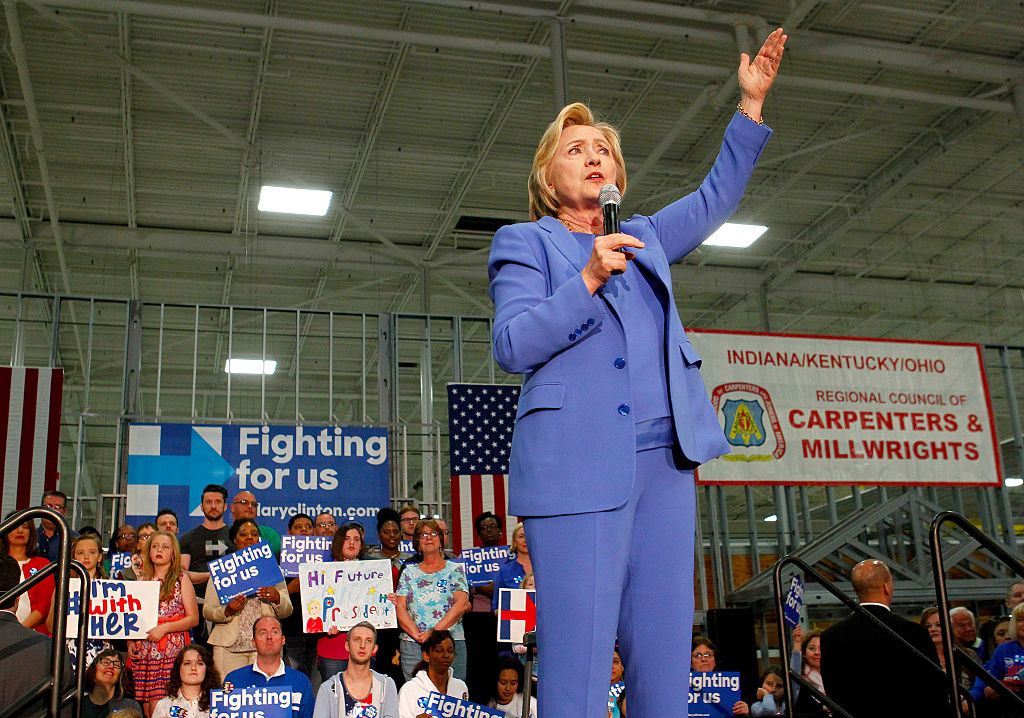 WASHINGTON (AP) — Hillary Clinton and Bernie Sanders were neck-and-neck in Kentucky’s presidential primary Tuesday, as Clinton declared victory and sought to blunt the momentum of her Democratic rival ahead of a likely general election matchup against Republican Donald Trump.

The race was too close to call a winner in Kentucky but Clinton wrote on her Twitter feed: “We just won Kentucky! Thanks to everyone who turned out. We’re always stronger united.” With almost all the votes counted, Clinton held a narrow lead of less than one-half of 1 percent as she tried to avoid ending the primary season with a string of losses to the Vermont senator.

Clinton holds a commanding lead of nearly 300 pledged delegates over Sanders and a dominant advantage among party officials and elected leaders known as superdelegates. The outcomes in Kentucky and Oregon were not expected to change that and the former secretary of state remains on track to clinch the nomination in early June.

Tuesday’s elections took place amid new questions about party unity following a divisive weekend state party convention in Nevada. Supporters of Sanders tossed chairs and made death threats against the Nevada party chairwoman at the event in Las Vegas, arguing the party leadership rigged the results of the convention in favor of Clinton.

In a sign of the tensions between the two sides, Sanders issued a defiant statement on Tuesday dismissing complaints from Nevada Democrats as “nonsense” and said his supporters were not being treated with “fairness and respect.”

Trump won the sole GOP contest in Oregon. The billionaire businessman picked up nine delegates earlier Tuesday in Guam, which held its territorial convention in March, and had 1,143 delegates heading into the Oregon contest — fewer than 100 delegates short of the 1,237 he needs to clinch the nomination.

The Sanders campaign did not immediately saying whether it will challenge the results in Kentucky, which does not have an automatic recount.

In Kentucky, the former secretary of state visited black churches, a small-town diner and held rallies on Sunday and Monday in an effort to break up Sanders’ momentum after his recent victories in Indiana and West Virginia.

Clinton’s husband, former President Bill Clinton, was the last Democrat to carry the state in a presidential election — he won Kentucky in 1992 and 1996 — and the former first lady tried to emphasize those ties in the days leading up to the primary.

“I’m excited about the primary but we’ve got to turn a lot of people out,” Clinton told a packed diner in Paducah, Ky., on Monday. “I’ll tell you this. I’m not going to give up on Kentucky in November. I want to help to bring back the kind of economy that worked for everybody in the 1990s.”

Facing a choice between Clinton and Sanders, physician Annie Skaggs in Campbellsville, Kentucky, said she had a hard time making up her mind.

“I like them both. I wanted to put them both in a blender and whir them up together,” she said. “I voted for Hillary. She’s got a little broader base and more experience, especially with foreign policy.”

Sharon Sharp said she voted for Sanders for one reason: He is not Hillary Clinton.

“Benghazi and the emails? That’s just too much to trust her to run my country,” Sharp said after casting her vote.

Sanders was favored in Oregon, which is among the nation’s most liberal states. Sanders secured the endorsement of Sen. Jeff Merkley, D-Ore., in April.

Nearing the end of a long primary slog, the two Democratic candidates are preparing for June 7 primaries in California, New Jersey and four other states. When pledged delegates and superdelegates are combined, Clinton is now about 95 percent of the way toward securing the Democratic nomination.

Sanders has vowed to campaign through the end of the primary season on June 14 in the District of Columbia and amass as many delegates as possible to influence the party’s platform and message.

He is still aiming to wrestle the nomination from Clinton, even though he would need to win about two-thirds of the remaining pledged delegates to end the primary season in a tie.

Sanders campaigned Monday and Tuesday in Puerto Rico, which holds its contest on June 5, and was holding a rally in the Los Angeles area late Tuesday.