How Blockchain Technology Can Reinvent The Power Grid 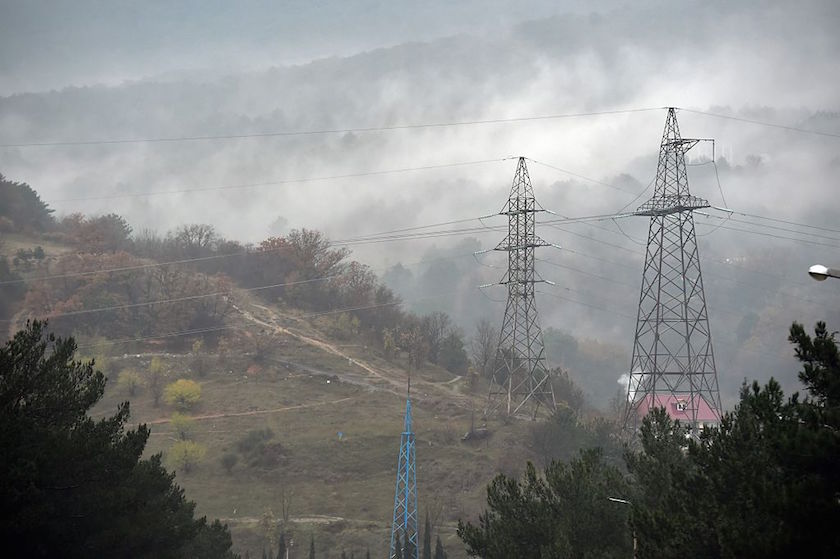 YALTA, CRIMEA, RUSSIA - NOVEMBER 27: Electricity lines on November 27, 2015 in Yalta, Crimea, Russia. Crimea declared a state of emergency on November 22, 2015 after its main electricity lines from Ukraine were blown up, leaving the Russian-annexed peninsula in darkness after the second such attack in as many days. (Photo by Victor Korotayev/Kommersant Photo via Getty Images)
Kommersant Photo Kommersant via Getty Images

A power pole collapses at 8 p.m. on a hot night in the remote outback of Australia. This is a problem for William and Olivia Munroe, who raise sheep and cattle 100 miles outside an old gold mining town on the edge of the Great Victoria Desert. In the summer, the temperature frequently soars close to 120 degrees Fahrenheit. Their children attend school via satellite link, the family’s only means of accessing health services in case of illness or emergency. Although the Munroes have a backup generator, it can’t power the water pumps, communications, and air-conditioning for long. In short, their lives depend entirely upon reliable energy.

Nine hours later, the power utility sends out a team to find and fix the downed pole. Customer complaints give the company an idea of where the break occurred, but the team takes more than a day to identify, reach, and fix the pole. Meanwhile, the Munroes and nearby residents, businesses, and institutions go without power and connectivity at considerable inconvenience, economic impact, and physical risk. In the outback, blackouts are not just paralyzing; they’re dangerous. To minimize these hazards, at great expense the company deploys teams of inspectors to check the network regularly.

Imagine how much safer, easier, and cheaper it would be if each power pole were a smart thing. It could report its own status and trigger actions for replacement or repair. If a pole caught fire or began to tip or fall, it would generate an incident report in real time and notify a repair crew to come with the appropriate equipment to the precise location. Meanwhile, the pole could potentially reassign its responsibilities to the nearest working pole. After all, they’re all on the grid. The utility could restore power to the community more quickly without the huge ongoing costs of field inspection.

Using emerging software and technologies associated with the Internet of Things, we can instill intelligence into existing infrastructure such as a power grid by adding smart devices that can communicate with one another. Imagine creating a new flexible and secure network quickly and relatively inexpensively that enables more opportunities for new services, more participants, and greater economic value.

This configuration is known as a mesh network, that is, a network that connects computers and other devices directly to one another. They can automatically reconfigure themselves depending upon availability of bandwidth, storage, or other capacity and therefore resist breakage or other interruption. Communities can use mesh networks for basic connectivity where they lack access or affordable service. Mesh networks are alternatives to traditional top-down models of organization, regulation, and control; they can provide greater privacy and security because traffic doesn’t route through a central organization.

Organizations are already combining mesh networks with blockchain technology to solve complex infrastructure problems. Filament, an American company, is experimenting with what it calls “taps” on power poles in the Australian outback. These devices can talk directly to each other at distances of up to 10 miles. Because the power poles are approximately 200 feet apart, a motion detector on a pole that’s falling will notify the next pole 200 feet away that it’s in trouble. If for any reason the tap on that pole isn’t available, it will communicate with the next pole, or the next pole, for up to 10 miles, that will communicate to the company through the closest Internet backhaul location within 120 miles.

Customers can connect to the devices directly with their own phone, tablet, or computer. The tap can contain numerous sensors to detect temperature, humidity, light, and sound, all of which customers could use to monitor and analyze conditions over time. They could meter these data as an information service or license the data set through the blockchain to another user, such as a government, broadcaster, pole manufacturer, or environmental agency.

Filament’s business model is a service model involving three parties: Filament, its integration customer, and the utility company. Filament owns the hardware; its devices continually monitor the condition of the power poles and report changes. It sells the sensor data stream to the integrator, and this integrator sells to the utility.

The utility pays monthly for a monitoring service. The service enables the power company to eliminate the very expensive field inspection of its operations. Because power poles rarely fall, the power company rarely uses the actual communication capability of the mesh network

“Since Filament owns the devices, we can sell extra network capacity on top of this network that spans most of the continent,” said Eric Jennings, Filament’s cofounder and CEO. “Filament could strike a deal with FedEx” and FedEx drivers could use the mesh network for communications and vehicle tracking to indicate estimated arrival times and breakdowns.

This Internet of Things application depends on a Ledger of Things. With tens of thousands of smart poles collecting data through numerous sensors and communicating that data to another device, computer, or person, the system needs to continually track everything—including the ability to identify each unique pole—to ensure its reliability.

“Nothing else works without identity,” said Jennings. “The blockchain for identity is the core for the Internet of Things. We create a unique path for each device. That path, that identity, is then stored in the Bitcoin blockchain assigned to Filament. Just like a Bitcoin, it can be sent to any address.” The blockchain also ensures that the devices are paid for so they continue to work. The Internet of Things cannot function without blockchain payment networks, where Bitcoin is the universal transactional language.

Now, instead of poles, imagine digitizing every node in a power system to create entire new peer-to-peer models of power production and distribution.

Most homeowners, businesses, governments, and other organizations in urban North America get their power from regulated utilities at regulated prices. The local utility captures excess power in its supply for redistribution at wholesale rates, often with considerable leakage. The consumer, who may be located across the street from a local power source, still must go through the utility and pay full retail for renewable energy generated by their neighbor.

“Instead of the command-and-control system the utilities have now where a handful of people are actually running a utility grid, you can design the grid so that it runs itself,” said Lawrence Orsini, cofounder and principal of LO3 Energy. “The network becomes far more resilient because all of the assets in the grid are helping to maintain and run the utility grid.” It’s a distributed peer-to-peer Internet of Things network model with smart contracts and other controls designed into the assets themselves (i.e., the blockchain model). When a hurricane destroys transmission towers or fire cripples a transformer substation, the grid can quickly and automatically reroute power to prevent a massive blackout.

Locally generated power, used locally, is significantly more efficient than the utility-scale model, which relies on transmitting energy across vast distances, where energy is lost. LO3 Energy is working with local utilities, community leaders, and technology partners to create a market where neighbors can buy and sell the local environmental value of their energy.

With increasing generation of renewable power at the local level, the Internet of Things is challenging the regulated utility model. While the utilities are looking at benefits to their existing infrastructure (“smart grid”), connecting microgrids could lead to entirely new energy models.