How Duke Energy Is Passing the Torch to Young Employees 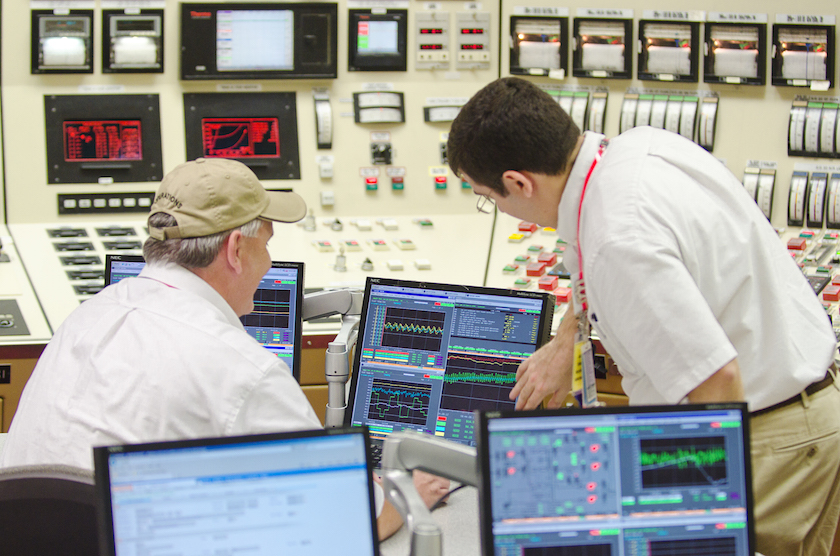 A couple of years ago, Lee Causey, at age 29 already a senior engineer in Duke Energy’s nuclear group, co-invented a game with teammate Brad Black called “Megawatt Fever.” Loosely based on Monopoly — there’s even funny money and a banker — it’s played on a board showing a map of the United States, dotted with symbols representing real-life locations of nuclear, wind, solar, and gas facilities. Each of the game’s eight players is a CEO who decides how to run his or her own utility, including complex calculations like “which types of fuel to use at which plants, depending on taxes, costs, and other factors, whether to accept or reject federal subsidies, and whether to use fracking,” Causey explains. After 45 minutes (or “at the banker’s discretion,” the rules say), the winner is the player whose company has the highest net worth.

It’s fun, but the game has a serious purpose: Giving Millennials an overview of how the electric-power industry works. Lots of employers are trying to figure out how to make sure the 10,000 Baby Boomers who turn 65 every day don’t take crucial company knowledge out the door with them when they retire. That’s a particular worry at Duke Energy’s (DUK) Charlotte-based nuclear group, which operates six plants providing power to five states. Says Melissa Moran, the division’s head of strategic workforce planning, “Last year, we looked at our demographics and realized that 46% of our current employees would be eligible to retire within five years.”

So Duke launched an all-out effort to help older workers pass along what’s in their heads to their young colleagues. First, Moran asked plant managers to identify the specific expertise of each of their team members nearing retirement, and come up with a plan for making a lasting record of each individual’s know-how, including having workers “make a video of themselves doing certain tasks that new hires can watch later,” says Moran. Most longtime employees are paired with newcomers as mentors, with the mentees encouraged to “ask lots of questions, like why we do it this way, and what if this or that happens,” she adds. The hardest details to pin down are often what Moran calls the “nuances and quirks,” those tricks of the trade that experienced workers know about, but which they might not think to mention. Managers at Duke are trying to capture those insights, most of which haven’t been written down anywhere until now, and add them to technical manuals at each plant.

To find out if all this is working, Duke has gathered focus groups of Millennial employees and asked them to rank each of 16 different activities — including formal training, going to industry conferences, and “lunch-and-learn” sessions with in-house experts — in order of effectiveness. Mentoring and job shadowing came out on top. Least useful: A learning method Duke calls “directly tasked with assignments without formal training,” or, as Lee Causey calls it, “being thrown into the fire.”

Duke is getting ready to share its knowledge-transfer experience with every other power company in the U.S., through collaborative software the company is developing in partnership with a national nonprofit group called NAYGN, for North American Young Generation in Nuclear.

Amanda Lang, 26, an engineer in nuclear fuels design, recalls playing “Megawatt Fever” at a NAYGN conference soon after joining Duke two years ago. Although Lang has concentrated mostly on gleaning technical knowledge from soon-to-retire coworkers, she says the board game expanded her understanding of the power business. Noting that the game requires players to compare carbon taxes on different types of fuel, “I realized that those taxes are an accurate reflection of how much carbon each type actually generates,” she says. “It got me thinking about the politics involved, and the future of the industry.”