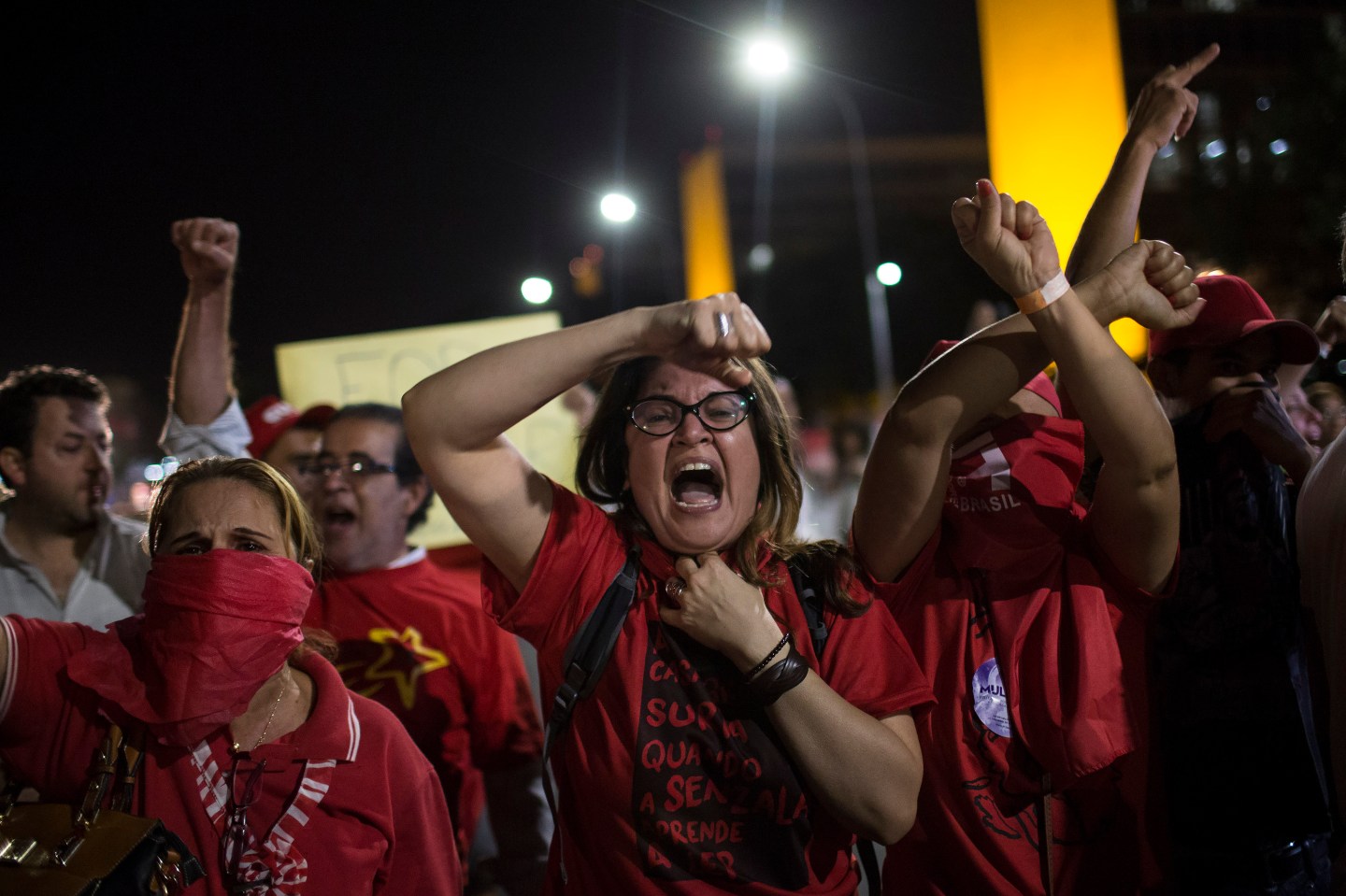 Supporters of President Dilma Rousseff shout during clashes with the police outside Congress, in Brasilia, Brazil, Wednesday, May 11, 2016. Brazil's Senate is nearing a historic vote on impeaching Rousseff, likely ending 13 years of government by her party amid a spate of crises besetting Latin America's largest nation. (AP Photo/Felipe Dana)
Photograph by Felipe Dana/AP

Rousseff’s enraged backers called the move a coup d’etat and threatened wide-scale protests and strikes. Her foes, meanwhile, insisted that she had broken the law, and that the country’s deep political, social and economic woes could only be tackled with her on the sidelines.

The 55-22 vote means that Rousseff’s ally-turned-enemy, Vice President Michel Temer, will take over as acting president later Thursday while she is suspended. The Senate has 180 days to conduct a trial and decide whether Rousseff should be permanently removed from office.

“Did anyone think that we would get to 2018 with a recovery under this government? Impossible,” said Jose Serra, the opposition Social Democratic Party’s failed presidential candidate in the 2010 race that brought Rousseff into power. “The impeachment is just the start of the reconstruction.”

Rousseff’s impeachment ends 13 years of rule by the Workers’ Party, which is credited with lifting millions out of abject poverty but vilified for being at the wheel when billions were siphoned from the state oil company Petrobras.

Analysts say Rousseff got herself into trouble with a prickly manner and a perceived reticence to work with legislators that may have alienated possible allies. Rousseff, however, has suggested that sexism in the male-dominated Congress played a role in the impeachment.

Temer, a 75-year-old career politician, has promised to cut spending and privatize many sectors controlled by the state. For weeks, he has been quietly putting together a new Cabinet in expectation of taking over, angering Rousseff supporters who accuse him of being in on a plot to oust her.

During the debate, Humberto Costa, the Workers’ Party leader in the Senate, brandished a photo of Rousseff from her days as a young Marxist guerrilla during the country’s 1964-1985 dictatorship. The image showed her at the military proceedings against her.

Costa called the impeachment the second unjust trial Rousseff had endured, and that impeachment was a bid by Brazil’s traditional ruling classes to reassert their power over the country and roll back Workers’ Party policies in favor of the poor.

“The Brazilian elite, the ruling class, which keeps treating this county as if it was their hereditary dominion, does not appreciate democracy,” Costa said.

Rousseff, 68, was impeached for her alleged mishandling of the federal budget. Critics said she used accounting tricks to hide ballooning deficits and bolster an embattled government. Brazil’s first female president, who was tortured under the country’s dictatorship, has frequently blasted the impeachment push as modern-day coup, arguing she had not been charged with a crime and previous presidents did similar things.

When the impeachment measure was introduced last year in Congress, it was generally viewed as a long shot: as late as February, consultancies like Eurasia were predicting it wouldn’t even make it out of committee in the lower Chamber of Deputies.

But momentum built over several months, as Brazilians seethed over numerous corruption scandals linked to Petrobras and daily announcements of job losses added to growing desperation. The economy is expected to contract nearly 4 percent after an equally dismal 2015 and inflation and unemployment are hovering around 10 percent, underscoring a sharp decline since the South American giant enjoyed stellar growth for more than a decade.

The Senate action came after the lower house voted 367-137 last month in favor of impeachment.

Polls have said a majority of Brazilians supported impeaching Rousseff, though they also suggest the public is wary about those in the line of succession to take her place.

Temer has been implicated in the Petrobras corruption scheme as has Calheiros, the Senate head who is now No. 2 in the line of succession. Former House Speaker Eduardo Cunha, who had been second in line, was suspended from office this month over allegations of obstruction of justice and corruption.

Rousseff has vehemently denied her administration’s financial sleight of hand moves constituted a crime and argued that such maneuvers were used by prior presidents without repercussions. She has stressed that unlike many of those who have pushed for impeachment, she does not face any allegations of personal corruption.

The impeachment process, Rousseff says, amounts to a coup aimed at undoing social programs that have lifted an estimated 35 million Brazilians out of grinding poverty over the past years.

Temer, of the centrist Democratic Movement Party, insists he would expand the popular social programs, though he has also signaled that fiscal rigor is needed to dig Brazil out of its current fiscal hole.

Adding to Brazilians’ economic worries, the investigation into a multibillion-dollar kickback scheme at Petrobras has ensnared dozens of elite politicians and businessmen across the political spectrum. Although Rousseff herself hasn’t been implicated, top officials in her party were and that tarnished her reputation.

The president “is having to pay for everything,” Sen. Telmario Mota de Oliveira said, arguing that Brazil’s problems shouldn’t be all pinned on her.