Living the Most Productive Week in the History of Mankind 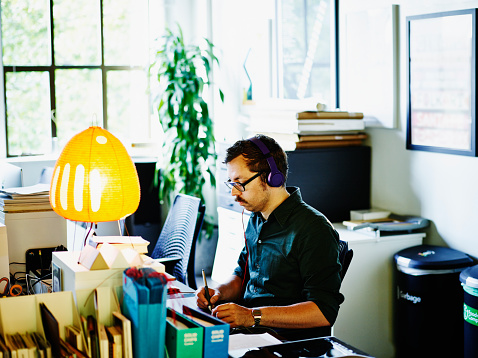 I couldn’t tell you the last time I scrolled through my Facebook news feed without seeing an article about productivity. “10 Ways to Be More Productive at the Office.” “The Best Productivity Hacks for Millennials.” They’re everywhere.

Maybe I like way too many “business-y” pages. Maybe we, as human beings, are obsessed with productivity. Not entirely sure.

But here’s what I am sure of—screw those articles, man. I never click them. I don’t need someone to tell me how to be productive. I have my own unique work and procrastination habits that I’ve masterfully developed over time because I actually know who I am. Business Insider don’t know Kendall Baker.

Woah, dude. That seems a little aggressive. Have you ever actually read one of them? Maybe given a new daily routine or productivity “hack” a try?

That’s a fair question, concerned reader, and one that I asked myself two weeks ago. In doing so, I realized I was being pretty ignorant—hating on something without giving it a chance or knowing anything about it is very childish. And I’m a big boy now.

So, I decided to get on board the productivity train… in a BIG way.

I would live the most productive week any human being has ever lived, using the daily routines of wildly successful people as my guide. I’d also sprinkle in some bonus “hacks” along the way to ensure that every waking moment of my life reeked of productivity, efficiency, and (let’s face it) borderline insanity.

Choosing the routines to follow was easy because I was looking for the most ridiculous ones imaginable. If I was going to be a guinea pig for a week, wearing the same outfit to work every day like Mark Zuckerberg wasn’t going to cut it.

I ended up selecting three well-known CEOs (who are alive) and one former world leader (who is not). So, without further adieu, it’s time to watch me become the greatest employee of all time or crash and burn…

CEO: Marissa Mayer (while she was a VP at Google)

8 a.m.: Five hours of sleep sucks, but it’s not terrible, especially when you live next to a dope coffee spot. I had about 45 minutes before I needed to be at the office, so I showered, brushed my teeth, and planned out my workday hour-by-hour. Knowing exactly what I’d be doing during the upcoming day instantly made me feel way more organized than usual heading out the door.

During my commute, I turned my phone to silent and placed it in the smallest pocket of my backpack, hoping I’d just forget about it instead of having to fight the urge to check it all day long.

10 a.m.: I just completed my first “scheduled” hour, which was spent writing a short article. While writing, I used the (10+2)*5 rule, working for ten minutes, taking two minutes off, then repeating.

This turns out to be especially effective for the writing process, since conducting research for articles online can be pretty distracting. Normally, I find myself losing focus when I come across an article that piques my interest. However, with the (10+2)*5 rule firmly in place, I bookmarked those articles and read them during my two-minute breaks.

4 p.m.: Honestly, I’m already over this whole hour-by-hour work day. It feels too forced. Normally, I create a to-do list and work through it at my own pace, which allows me to remain focused but also flexible.

If my day was filled with meetings and one-on-one’s, then Mayer’s hour-by-hour routine might work better. But since my job requires some level of creative thinking, this doesn’t feel very productive. Some tasks can’t be regimented.

11 p.m.: My gym closes at 10, so Marissa Mayer’s psychotic routine presented a bit of a problem. But nothing I couldn’t work with.

I decided to go for a run through my neighborhood. It was peaceful, but I live in a city… so it was also sketchy. I needed to think of another option for the following night that didn’t involve me scaring everyone that I came across.

Midnight – 3 a.m.: Depending on your job, working late at night is either awesome or pointless. For me, it was AWESOME. Seriously, this might have been the three most productive hours of my entire day. Very few distractions and a sense of the previous day’s accomplishments made me feel at ease…and productive.

Rather than taking you through specific parts of my day like I did for Monday, allow me to provide a brief recap of Tuesday.

My morning sucked. So did my afternoon. I was exhausted, my phone addiction was beginning to show its face, and Mayer’s hour-to-hour routine made time feel like time was moving reallllyyyyy slowwwwwwwlllyyy.

Then 11 p.m. arrived and I was saved. I decided to head to a nearby basketball court instead of going for a run. Not as sketchy… but definitely still sketchy.

There wasn’t enough light to shoot, so I reverted back to an old high school basketball drill: full-court layups. Crazy what working out in pitch black darkness can lead to, huh?

My preference for as long as I can remember has been to work out in the morning. I view it as a great way to start the day and I use that hour to get my thoughts organized before heading to the office. Working out late at night is totally different. The day was over and I’d accomplished what I needed to accomplish, so my mind felt free to wander. Very different vibe.

My midnight – 3 a.m. block was as productive as ever and it’s something I’m seriously considering adopting. Maybe not on a nightly basis, but whenever I have a lot on my plate in the future, I might consider a late night work session. I’m a freakin’ machine when everyone else is asleep.

Yeah, I cheated and woke up at 8 a.m. instead of 5 a.m. Cut me some slack, okay? Two hours of sleep would have put me out of commission and I had to focus… on meditating.

I have the Headspace app downloaded on my phone, so I used that. Having meditated before, I had some idea of what to expect, but it felt different doing it right after waking up.

First of all, I remembered my dream from the night before far more vividly than normal. In fact, I usually don’t remember my dreams at all. But spending thirty minutes reflecting brought it all back.

I also appreciated how calm it made me feel, which is crucial at the very beginning of the day. Normally I’ll check my email right when I wake up, which can lead to a lot of stress right off the bat. This was the exact opposite.

Next up was the 7-Minute Workout (three times) and it was one of the dumbest things I’ve ever done. Why seven minutes? Why three times? Need answers, Dorsey.

10 a.m. – 1 p.m.: My first two hours at the office were spent enlisting the help of my bonus productivity hack: the productivity playlist.

According to research, we’re most productive when listening to music we’re indifferent toward…songs we don’t love but also don’t hate. So, basically I had to determine the most “meh” artist possible.

Coldplay. Perfect. Worked like a charm. No singing along but no urge to turn it off. I was in the perfect state, typing away to the beat but not really aware of what song was playing.

2:30 p.m.: I just got back from working out and feel great. I was able to reflect on the work I’d done in the morning and also organize my thoughts for the afternoon.

• Meditation session: Still awesome.
• 7-Minute Workout: Still really, really stupid.
• Productivity Playlist: According to a separate study, listening to sounds of nature can also make you super productive, so I tried it. The lack of lyrics eliminates distractions, but I didn’t get the motivation kick that I’ll often get from some driving beats and a guitar.
• Midday workout: I’m a huge fan but also understand that it’s only convenient if you have a gym nearby. I had this luxury and therefore didn’t feel too rushed and my workout functioned as the perfect break in the workday.

Now, I know what you’re thinking. Choosing Winston Churchill’s “laying in bed all day” routine was just an excuse to get out of work for the day. No comment.

But hold on, I actually got a lot done in sweats.

It’s imperative that you sit in a slightly uncomfortable position, so you don’t risk falling asleep. Otherwise, you can be incredibly productive while sinking into a mattress.

1:30 – 3:30 p.m.: That was easily the longest lunch break I’ve ever taken, but I made sure it was a productive one (duh). What I realized pretty quickly is that you can’t just zone out when you have two hours to essentially “kill.” You have to come up with something to do. Since you’re on a “break” and eating, this activity probably shouldn’t require too much thinking. So, I decided to answer emails.

Due to the abundance of time, I was able to add a personal touch to each email, which was cool and honestly something people should do more. Email is such a common form of communication, yet we write them like we’re robots. Maybe the food made me happy? Or maybe I should set aside much more time than necessary to answer emails in the future? Big fan.

3:30 – 5 p.m.: I was tired from the entire week and didn’t eat much food for lunch so I got absolutely nothing done during this time. Nothing.

Which was a great segue into my nap.

8 – 10 p.m.: I don’t know how Churchill did it, man. Working right after eating dinner is definitely not productive for me. I’m sittin’ here like a blob. Overall reaction to his routine is largely positive, though. Especially if followed on Fridays only.

So, here’s what I learned: There’s no productivity blueprint. There’s just you, your goals, and your ability to stick to them.

I also learned that following other people’s routines only works if you have a similar job. For example, if you’re a manager and hold a lot of meetings, then Marissa Mayer’s hour-to-hour nonsense might be perfect for you. But if you’re in a creative role, it’ll probably suck.

Similarly, if you work at a desk most of the day and can rock headphones, it wouldn’t hurt to start thinking about the type of music you should be listening to. But if you’re a librarian, you probably shouldn’t be rocking headphones.

Was this experiment kind of a mess? Yes, absolutely. However, I did get to work in sweatpants and be “that guy” doing layup drills on a pitch black basketball court.

And seriously, try working from midnight to 3 a.m. It’s amazing.