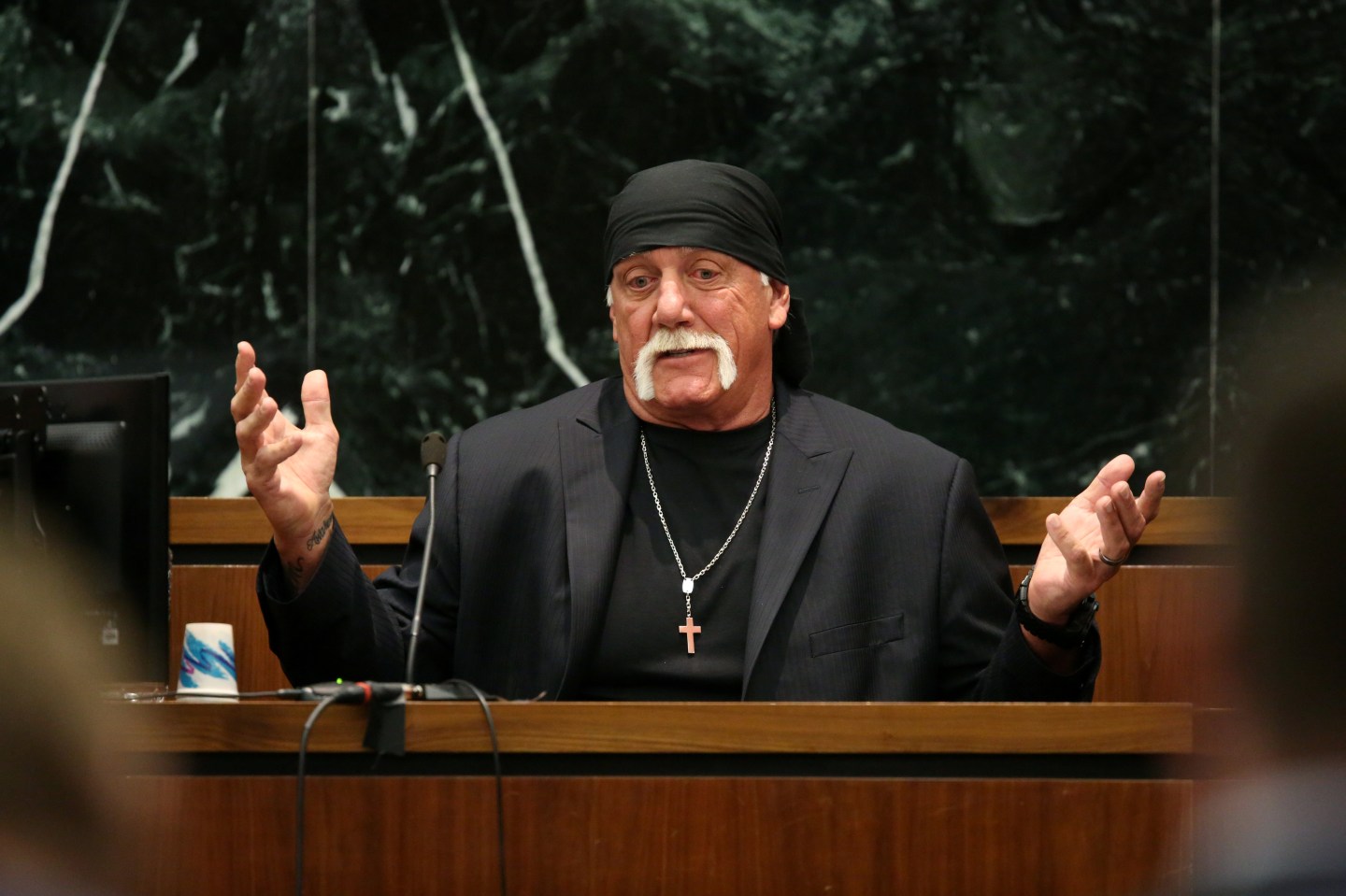 ST PETERSBURG, FL - MARCH 08: NY POST OUT Terry Bollea, aka Hulk Hogan, testifies in court during his trial against Gawker Media at the Pinellas County Courthouse on March 8, 2016 in St Petersburg, Florida. Bollea is taking legal action against Gawker in a USD 100 million lawsuit for releasing a video of him having sex with his best friends wife. (Photo by John Pendygraft-Pool/Getty Images)
Photograph by John Pendygraft—Pool via Getty Images

After receiving a $140 million in total damages against Gawker Media in a civil trial this March for the company’s 2012 decision to post a sex tape involving him, former pro wrestler Hulk Hogan has filed another lawsuit against Gawker for allegedly leaking sealed court documents to the National Enquirer quoting him making racially insensitive comments.

The comments, part of a transcript published by the Enquirer in a 2015 story, featured Hogan using racial slurs to describe his daughter’s boyfriend, who is black. (Hogan later admitted to making the comments.)

Hogan racially insensitive statements were made during a filmed 2007 sexual encounter with Heather Clem; a leaked sex tape featuring Hogan and Clem was the subject of Hogan’s first lawsuit against Gawker. The new suit claims a transcript of Hogan’s comments were part of that pending lawsuit, but that they were “court protected, confidential, ‘sealed,'” as part of that pending lawsuit.

The new suit, filed in Pinellas County Circuit Court, accuses Gawker of using the statements against Hogan “to destroy him publicly and as leverage to try to force Plaintiff to settle or drop” his lawsuit over the sex tape.

Soon after the Enquirer published its story, Hogan was terminated by the WWE.

The suit claims that following the story, Hogan’s “highly valuable global brand … was decimated within days, and has been permanently damaged if not completely destroyed.” It claims that all of Hogan’s endorsement contracts were terminated and that his name and likeness was erased from the WWE website and its Hall of Fame.

“Plaintiff’s income was cut off, his legacy in entertainment was severely damaged (if not completely destroyed), and his global brand was forever tarnished,” the suit claims.

According to the suit, Gawker had repeatedly threatened to release the statements over a period of several months. During that time, the suit claims, “Gawker’s business went into a tailspin” over a controversial story allegedly outing a rival media executive, which, according to the suit, led several major advertisers to stop advertising at Gawker and several senior staff members to resign.

The suit further states that “Gawker needed an immediate, major public story to be released, to change the public discourse about Gawker, and deflect attention away from its wrongful business practices” and that Hogan’s comments “were just the solution.”

According to the suit, 14 minutes after the Enquirer posted the transcript, Gawker editor A.J. Daulerio sent a tweet to Hogan linking to the story, with text reading, “XOXOXO.”

Gawker Media released a statement to PEOPLE reading, “This is getting ridiculous. Hulk Hogan is a litigious celebrity abusing the court system to control his public image and media coverage.

“It was absurd enough that hulk Hogan claimed $100 million for emotional distress and economic damage for a story that he’d already made public. Now, Hulk Hogan is blaming Gawker for racist remarks he made on another sex tape, which Gawker never had.

“As we’ve said before and are happy to say again: Gawker did not leak the information. It’s time for Hulk Hogan to take responsibility for his own words, because the only person who got Hulk Hogan fired from the WWE is Hulk Hogan.”