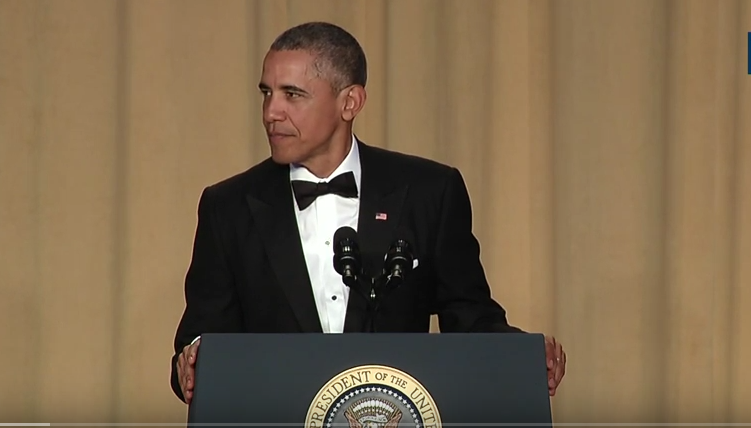 Even in absentia, Donald Trump was the most talked-about person in the room at the so-called “nerd prom.”

On April 30, Saturday night, at the White House Correspondents’ Dinner—an annual see-and-be-seen event where Administration officials hobnob with the Washington press corp alongside a crazy quilt of celebrities from across the cultural spectrum—the billionaire Republican frontrunner was more conspicuous by his absence. (Trump, like Hillary Clinton, Democratic frontrunner, was on the campaign trail.)

Still, Trump became the punchline for a barrage of stinging jokes by President Obama in what was generally regarded as a command performance at the president’s eighth and final Correspondents’ Dinner.

“I am a little hurt he’s not here tonight,” the president said of Trump, about two-thirds of the way through his 32-minute speech. “And it is surprising. You got a room full of reporters, celebrities, cameras. And he says no? Is this dinner too tacky for the Donald? What could he possibly be doing instead? Is he at home eating a Trump steak? Tweeting out insults to Angela Merkel? What’s he doing?”

And, Obama ridiculed Trump’s involvement with the Miss Universe beauty pageant and the 1992 bankruptcy of Trump Plaza in Atlantic City.

“The Republican establishment is incredulous that he’s the likely nominee. Shocking!” Obama said. “They say Donald lacks the foreign policy experience to be president. But in fairness, he has spent years meeting with leaders from around the world: Ms Sweden, Ms. Argentina, Ms. Azerbaijan.”

“And there’s one area where Donald’s experience could be invaluable. That’s closing Guantanamo,” the president continued. “Because Trump knows a thing or two about running waterfront properties into the ground.”

The billionaire real estate mogul was previously shredded by Obama at the 2011 White House Correspondents’ Dinner. Some have even speculated that the shredding helped galvanized Trump’s presidential candidacy as a kind of public redemption. Trump, like Democratic frontrunner, Hillary Clinton, didn’t attend this year to spend time on the campaign trail.

Plenty of ribbing of others

The event’s host, Larry Wilmore of Comedy Central’s The Nightly Show with Larry Wilmore, hailed the commingling of celebrities, politicians and journalists as “the most narcissistic room ever invented.”

But as they all looked on, POTUS made a point to rib several other presidential candidates. Seventy-four-year-old Bernie Sanders, who attended the dinner, was hailed as the “bright, new face of the Democratic party.”

Obama likened Hillary Clinton’s campaign demeanor to “your relative who got Facebook”: “Dear America, did you get my poke?” Obama said, smiling. “Is it appearing on your wall? I’m not sure I’m using this right. Love, Aunt Hillary.”

Ted Cruz, meanwhile, suffered what the president termed a “tough week.” “He went to Indiana, Hoosier country, stood on a basketball court and called the hoop a ‘basketball ring,’” Obama said. “What else is in his lexicon? ‘Baseball sticks’? ‘Football hats’? But, sure, I’m the foreign one.”

About 20 minutes into his speech, however, Obama still hadn’t mentioned Trump by name. And as the president began thanking reporters on the DC beltway beat, everyone watching assumed he would end his remarks without addressing the 800-pound gorilla who wasn’t in the room.

After a series of jokes (those described above), the Commander in Chief put the brakes on his de facto Trump comedy roast. “Alright, that’s probably enough. I’ve got more material. I don’t want to spend too much time on the Donald,” Obama said. Specifically addressing the journalists in attendance, he added. “Following your lead, I want to show some restraint. Because I think we can all agree, from the start, he’s got the appropriate amount of coverage befitting his candidacy. I hope you all are proud of yourselves.”

From there, he implicitly invoked the violence that has broken out at several recent Trump campaign rallies to deliver his sharpest barb—a reference to the potential for a contested convention at the Republican convention in Cleveland this summer: “The guy wanted to give his hotel business a boost and now we’re praying Cleveland makes it through July.”

Interviewed as he was arriving at the White House Correspondents’ Dinner, Trump’s son Eric admitted he fully expected his father to get the comedic once-over. Still, he voiced optimism about the elder Trump’s future White House occupancy.

“I’m sure there’ll be plenty [of jokes] out there. There’s a lot of material,” Eric Trump told reporters. “But hey! Next year, we’ll be able to get him back.”