Why John Kasich Should Stay in the Presidential Race 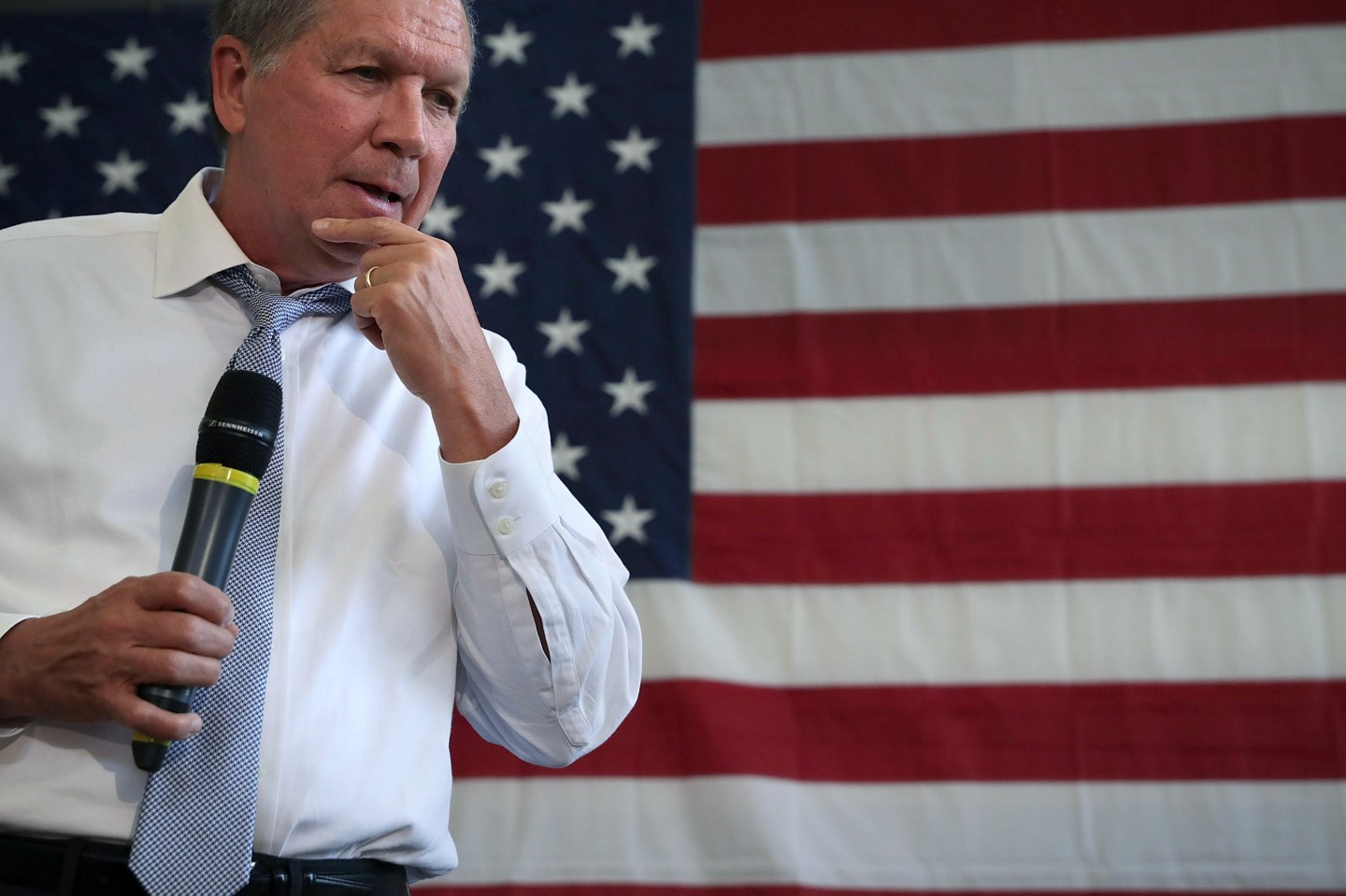 Donald Trump’s landslide victories in five states on Tuesday have left the nomination within his grasp, but Cruz and Kasich haven’t thrown in the towel. Neither of them can get to 1,237 delegates at this point, so the strategy for both is to deny Trump a first-ballot victory and hope to emerge as the choice of delegates in a brokered convention. Cruz has 566 delegates, while Kasich has only won his home state of Ohio, leaving him with 153 delegates out of the 1,884 delegates chosen so far. Shouldn’t he face reality and get out?

Delegates want winners. They are no different than voters in this regard. Republican voters want a candidate who can beat Hillary Clinton. Those who voted for Trump have not been lodging a symbolic protest. Many of them believe that if any Republican can beat Clinton, it is Trump. But national polls show Kasich beating Clinton by 8% and Trump losing to Clinton by 7%. Kasich does better than Trump among a variety of demographic groups, most notably women, and better than Cruz because he is more ideologically moderate. Don’t voters care about electability?

The confidence Trump supporters have in the electability of their candidate is underestimated in exit polls. In recent New York exit polls, only 8% of voters in the Republican primary made their choice primarily based on who could win in November, while 64% wanted an outsider. This is misleading. Trump supporters don’t see outsider status and electability as an either-or proposition: Trump is an outsider who is electable. Supporting an outsider who can’t win is throwing away your vote, and few Americans are willing to throw away their votes. Delegates should follow the voters and try to nominate a winner. But does that mean they should stay with Trump if the convention is contested? There is historical precedent for delegates exercising their own judgment.

During the 1876 Republican Convention, Rutherford B. Hayes, governor of Ohio, was chosen as the Republican nominee. When the Convention in Cincinnati began, the prospects for Hayes seemed bleak. James G. Blaine, speaker of the House, had come to the convention as the frontrunner with enthusiastic support in traditional Republican bastions. Nevertheless, delegates became convinced that Republicans would have to prevail in battleground states like Ohio and Indiana if they were going to win the general election. Hayes had already won elections in Ohio, beating popular Democratic opponents. By the seventh ballot, arguments for Hayes’ electability persuaded enough delegates to secure the nomination for a candidate who had entered the process as a long shot at best. Hayes then went on to beat the Democratic nominee, Samuel J. Tilden, in one of the most complicated and contested elections in American history.

Admittedly, the nomination process has changed dramatically since the late 19th century. The influence of party elites has declined significantly: Voters largely choose nominees through primaries. But if the verdict of voters is inconclusive, like a hung jury, then delegates will have to decide, and they should do so based on the same criteria that have almost always prevailed in party calculations: electability. A majority of the delegates will become unbound after the first ballot, and they will be viewing the political landscape in July, months after many of the voters had their say in primaries. With more up-to-date information and more reliable polling results to factor into their analyses, delegates can make more informed choices. Similarly situated voters might have reconsidered earlier choices made with less information. If Trump can turn the polls around before the Republican Convention, delegates should go for Trump. If the polls continue to indicate that Trump is a loser, then delegates should be free to substitute a winner.

Only time will tell if history will repeat itself, but for those who think Kasich is wasting people’s time, think again.