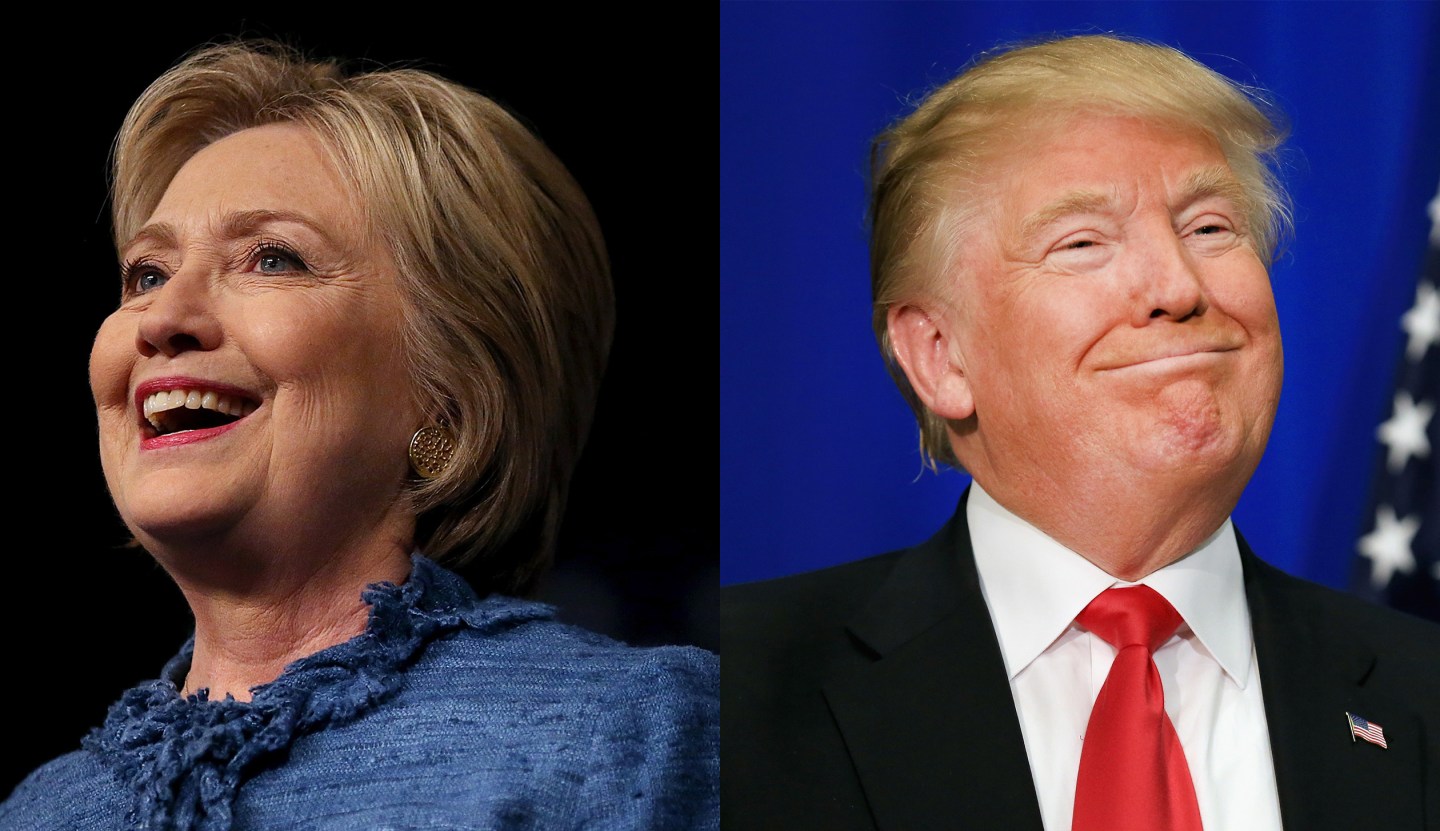 The Associated Press called the many of the races in those states shortly after polls closed at 8pm, marking major victories for both leading candidates as they march toward their parties’ nominations.

Donald Trump, attending the TIME 100 gala, renewed his calls for John Kasich and Ted Cruz to drop out of the Presidential race. “They should drop out, because frankly they have no path to victory,” Trump said Tuesday night.

Both Clinton and Trump entered Tuesday’s primaries in the Atlantic primaries with strong leads in the road the nomination and they are likely to end the night with even bigger advantages over their opponents. Both projected confidence in the day ahead of the contests.

“I’ve got 10.4 million votes. I have 2.7 million more folks, real people, showing up to cast their vote, to express their opinion than Senator Sanders,” Clinton said in a town hall hosted by MSNBC on Monday. “I am winning. And I’m winning because of what I stand for and what I’ve done.”

“We’re going to win Pennsylvania in the general,” Trump said the night before the primaries.

Polls in the days ahead of the Tuesday contests showed the frontrunners with significant leads: Clinton was leading by double digits in polls in Pennsylvania and Maryland and Trump was ahead in those states by even larger margins. Trump could add as many as 100 delegates to his count, and Clinton could extend her lead of more than 250 pledged delegates.

Voting data at the county level was not yet available shortly after 8pm, but Trump victories in suburban counties in Connecticut and Maryland—areas that traditionally support Republican establishment candidates like former Massachusetts Gov. Mitt Romney and Arizona Sen. John McCain—could signal that he has become the accepted GOP candidate. Clinton victories in more rural areas of Pennsylvania and other states will be a sign she can recapture white working class voters who supported her in 2008.

A total of 384 Democratic delegates and 172 Republican delegates were at stake on Tuesday.

Even after Tuesday, both Clinton and Trump will continue to face a stiff challenge from their rivals. Vermont Sen. Bernie Sanders will hope to come close to Clinton in Rhode Island and Connecticut, New England states that have favored him, and prove that he can win some of the more diverse East-coast cities.

Sanders said on Monday that if Clinton wins the nomination and wants the support of his own voters, it is “incumbent” on her to support his big-ticket policy proposals. “If we end up losing,” it would be “incumbent upon [Clinton] to tell millions of people who right now do not believe in establishment politics and establishment economics” that she supports Sanders’ Medicare-for-all plan, Sanders said.

The Sanders campaign circulated a fundraising email with a photo of Bill and Hillary Clinton attending Donald’s wedding to Melania in 2005, suggesting the two rivals are closer than they say. “[T]here is one candidate in this Democratic primary who Donald Trump said would make a “great president,” and it’s not Bernie Sanders,” said Sanders campaign manager Jeff Weaver, referring to comments Trump made before Clinton began her 2016 campaign.

Texas Sen. Ted Cruz and Ohio Gov. John Kasich have teamed up to try to prevent Trump from winning the nomination, and hoped to knock into his lead on Tuesday. They will hope to stop Trump from sweeping the states and pick off some delegates ahead of more favorable contests in Indiana, Oregon and Nebraska next month.

The wildcard contest on the Republican side was the vote in Pennsylvania, where only 17 of the state’s 71 delegates are decided by the popular vote. The 54 unbound delegates will decide which candidate to support, so even if Trump wins by a large margin, he may not win the same proportion of delegates.

Trump will be at the TIME 100 gala on Tuesday night, and Clinton will speak in Philadelphia.