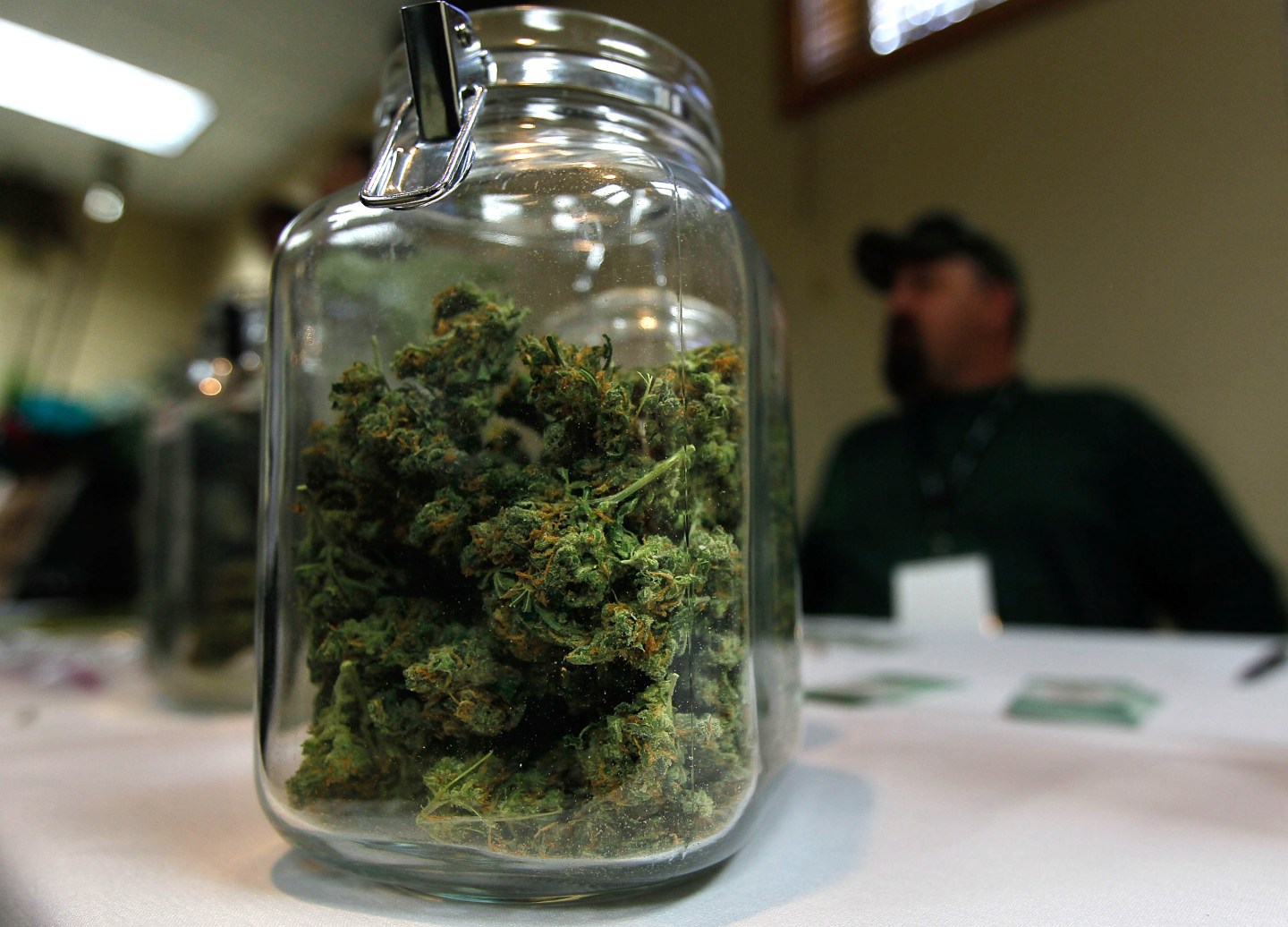 CORRECTION: This article originally mistakenly identified private equity fund Privateer Holdings as a current network member of The ArcView Group. Privateer’s founders are former members of ArcView, but have not been members for three years. The article has been corrected.

America’s marijuana industry has bloomed in recent years with voters in more and more states voting to legalize pot in some form as public opinion on the drug seems to evolve with each generation.

Colorado, the first state to open up legal recreational pot sales in 2014, reported nearly $1 billion in total marijuana sales last year. And, with a handful of additional states (including California’s huge market) expected to vote on legalization initiatives this fall, the industry’s overall growth could be due to explode. Some estimates suggest the total size of the U.S. marijuana industry could easily top $20 billion within a few years.

Because of projections like that, people have flocked to the industry in recent years in the hope of tapping into that vast potential as part of the ongoing “Green Rush” for marijuana money. As long as the drug remains federally illegal, keeping most major national and international brands from getting involved, the industry is full of potential for entrepreneurs and investors looking to control as large a share of the market as possible before larger forces move in on their turf.

Already, the burgeoning industry has produced a number of notably savvy businesspeople who could be the future of cannabis in America. Of course, influence of this young industry isn’t just measured dollars and cents. Some leaders from the world of politics, science, media and other fields are having a big impact on this young industry.

With that in mind (and, in honor of 4/20), here is a (by no means comprehensive) list of some of the most influential people in the marijuana industry today:

A former music critic and entertainment editor at The Denver Post, Ricardo Baca became the newspaper's (and, most likely, the world's) first official marijuana editor in 2013. Since then, Baca (picture above, on the left, along with a producer and the director of the 2015 documentary Rolling Papers) with has served as editor-in-chief of the Post's marijuana-focused vertical, The Cannabist, cataloguing the industry's growth from the heart of the first legal recreational marijuana market to open for business (Colorado's recreational pot sales started January 2014). The site also helped set off a boom in the number of publications focused on marijuana coverage. The Cannabist offers updates on the local marijuana culture—where Colorado's legal sales approached $1 billion last year—while also serving as an important source for news and analysis of the national conversation around the rapidly growing industry.

Justin Gover is the CEO of GW Pharmaceuticals (GWPH), the U.K. biopharmaceutical company that has been developing drug treatments derived from cannabis for nearly two decades. Dr. Geoffrey Guy founded GW Pharmaceuticals in 1998, with Gover joining a year later to run the company's operations.

With its stock up more than 100% over the past month, GW Pharmaceuticals now has a market value of roughly $1.7 billion thanks to some exciting product news the company announced in March. That's when Gover revealed that GW Pharmaceuticals had successfully treated a rare form of epilepsy called Dravet syndrome with one of its products. The drug in question is Epidiolex, which uses cannabidiol (or CBD), a non-psychoactive compound derived from cannabis. GW Pharmaceuticals also plans to test Epidiolex in other epilepsy-related drug trials.

A longtime advocate for legalizing marijuana, Steve Deangelo founded Harborside Health Center a decade ago in Oakland and the business quickly grew into one of the country's largest and best-known medical marijuana dispensaries. While recreational marijuana is still not legal in California, Harborside says it still manages to pull in more than $35 million in annual medical pot sales from what is now a pair of Northern California locations. (Harborside briefly opened a recreational dispensary in Portland, Ore., but recently pulled out of that state to focus on California expansion.)

Deangelo is also president and co-founder of The ArcView Group, a cannabis-focused investor network and research group that works to connect investors with entrepreneurs in the budding industry. ArcView's website  boasts of raising at least $70 million for more than 100 companies since its 2010 founding.

Deangelo's fellow co-founder of ArcView, Troy Dayton serves as CEO of the investor network and has also served as a board member of the advocacy group the Marijuana Policy Project and the National Cannabis Industry Association. Speaking to Fortune earlier this year, Dayton noted that the expected spread of legal marijuana to more U.S. states should send revenue growth in the industry soaring while attracting more major investors. ArcView's latest report on the legal marijuana market estimated the industry will hit $6.7 billion in total U.S. sales this year and could reach $21.8 billion by 2020.

California Governor Jerry Brown recently appointed Lori Ajax, a veteran of the state's Department of Alcoholic Beverage Control, as the state's first-ever chief of the Bureau of Medical Marijuana Regulation. Her task in that role is to shepherd the creation of a fully operational, statewide market for the licensing, regulation, and taxation of medical marijuana over the next two years. (Medical marijuana has been legal in California for two decades, but lawmakers only recently decided to establish the statewide regulatory framework after years of rules differing by county and city.)

That's a daunting task on its own, but it could become much more complicated later this year, when Californians are expected to vote on an initiative that would also legalize recreational marijuana in the state. The assignment for Ajax, a Republican who says she has never used marijuana, is all the more important when you consider that California, with 38 million residents, would be by far the largest state with a  legal medical and adult-use marijuana market.

It's hard to say how the pro-legalization lobby would have progressed without Keith Stroup, the attorney who founded the National Organization for the Reform of Marijuana Laws (NORML) in 1970 with a few thousand dollars in seed money from the Playboy Foundation. NORML has been pushing to remove negative stigmas about marijuana from the minds of Americans for decades, with the tide finally beginning to turn in recent years with the spread of statewide legal marijuana markets across the country. New polls show a slight majority of the country now supports legal use and the Drug Enforcement Administration recently announced plans to decide whether it will reschedule marijuana, which is currently a Schedule 1 drug (the most severe category).

Stroup's non-profit organization paved the way for several other lobbying groups that have also become extremely important to the pro-legalization movement, from the Drug Policy Alliance to the Marijuana Policy Project.

Celebrities hawking endorsed goods is nothing rare, not even in the world of pot. But, rapper Calvin Broadus (better known as Snoop Dogg) is truly a pioneer when it comes to celebrities in the legal marijuana industry. Snoop's long-public love of pot makes it no surprise that the rapper would endorse related products, such as his own series of vaporizer products, but he's also an investor in the industry as a director of the venture capital fund Casa Verde Capital.

Casa Verde invests in cannabis startups, including the marijuana delivery service Eaze and the pot-focused website Merry Jane. Meanwhile, several other celebrities are following Snoop into the marijuana business, from Willie Nelson to Whoopi Goldberg.

Of course, not every influential person is in favor of marijuana legalization. Any number of politicians are downright opposed, including New Jersey Governor and Donald Trump supporter, Chris Christie, who has repeatedly said he would like to use federal authority to shut down states' legal marijuana markets. (Of course, with Christie's failed presidential bid over, he'll likely have to hope for a Trump win to land in that type of position of power.)

Another Republican who has worked to sink legalization efforts is not a politician, but, rather a billionaire willing to spend to defeat marijuana legalization initiatives. Casino magnate Sheldon Adelson spent at least $5.5 million to help defeat Florida's medical marijuana vote last year and he has also pressured the editorial board at his recently-acquired Las Vegas Review-Journal to reverse their pro-marijuana position.

And, then there is the anti-legalization lobby, particularly Kevin Sabet's Smart Approaches to Marijuana, also known as Project SAM. A former White House advisor, Sabet has criticized the existing legal marijuana markets, claiming a resistance to regulations, and he has been labeled one of the most prominent legalization opponents in the U.S. by publications such as Rolling Stone and Salon.