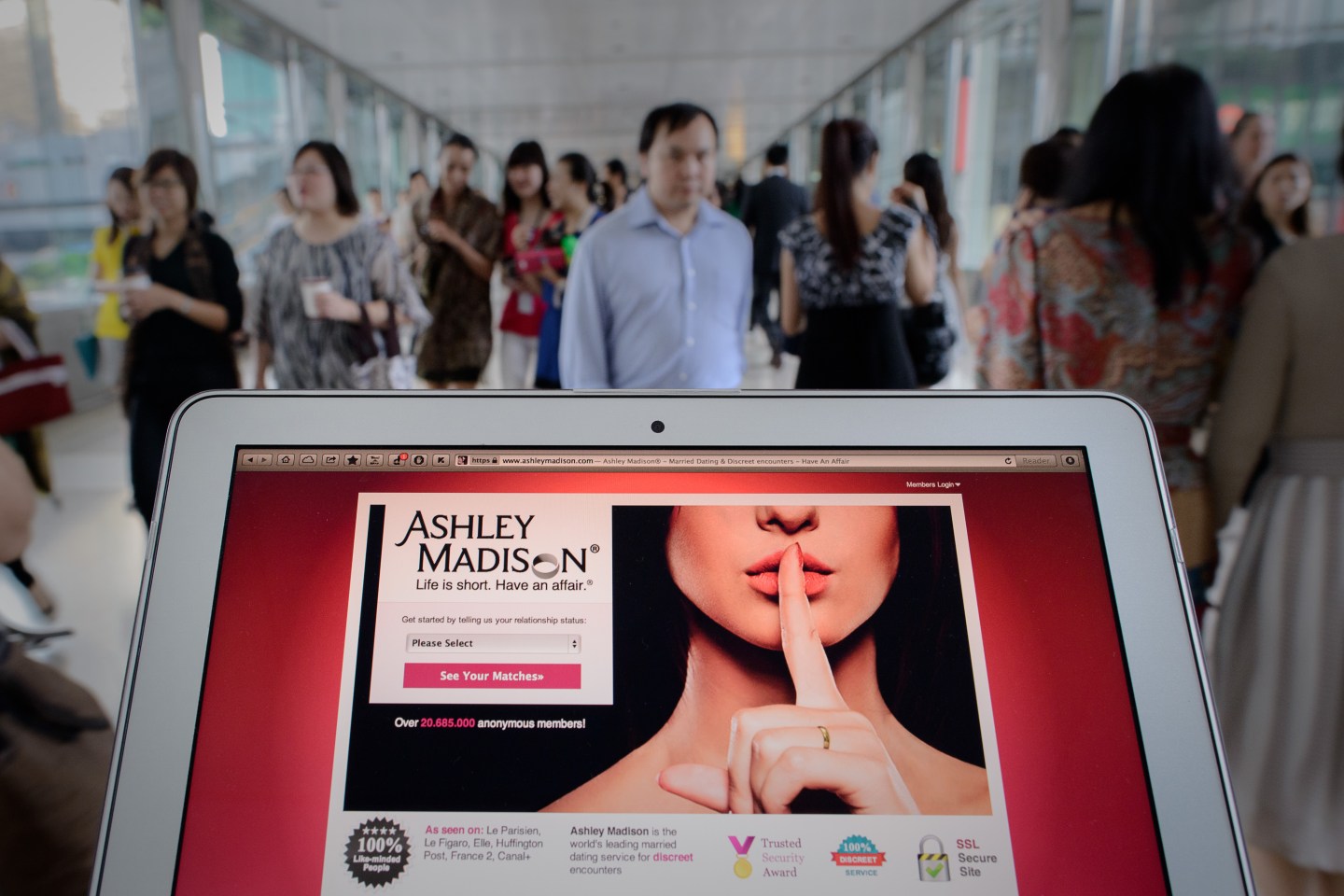 TO GO WITH AFP STORY LIFESTYLE-HONG KONG-INTERNET-SEX, FOCUS by Aaron Tam This photo illustration taken on August 20, 2013 shows the homepage of the Ashley Madison dating website displayed on a laptop in Hong Kong. The founder of a dating service promoting adultery is setting his sights on China's cheating hearts after a controversial launch in Hong Kong. AFP PHOTO / Philippe Lopez (Photo credit should read PHILIPPE LOPEZ/AFP/Getty Images)
Philippe Lopez—AFP via Getty Images

Dozens of the site’s 32 million members filed suit and are pooling their litigation into a proposed class action against Avid Life Media, Ashley Madison’s parent company. A district court judge in Missouri, where the case is set be heard, has ordered the plaintiffs to submit a consolidated complaint by June 3, Ars Technica reported, citing a court document.

People interested in participating in the suit are facing a hangup, however. In order to be a plaintiff, they must reveal their identities and, therefore, their involvement in a network that catered to people looking to cheat on their spouses.

Of the 50 or so plaintiffs who filed lawsuits, about 40 used “John Doe” or some equivalent pseudonym, the St. Louis Post-Dispatch reported earlier this year.

U.S. District Judge John Ross sided with Avid Life in barring litigation by people using aliases. Although the requirement could “exacerbate the privacy violations underlying their lawsuit,” the judge wrote in a ruling uploaded by Ars, “there is a compelling public interest in open court proceedings, particularly in the context of a class action, where a plaintiff seeks to represent a class of consumers who have a personal stake in the case and a heightened interest in knowing who purports to represent their interests in the litigation.”

For more on Ashley Madison, watch:

The individual’s attorney, Stephanie Linam, did not immediately reply to Fortune’s request for comment.

John Driscoll, the attorney behind the consolidated suit, told Fortune that the name requirement will presumably reduce the number plaintiffs in the class action lawsuit. It remains to be seen how many fewer, he said.

Plaintiffs, of course, have an incentive to go on the record: They stand to win any monetary rewards if they triumph in court. Revealing themselves, however, opens them up to scrutiny even beyond the acknowledgement that they signed up for the site. Anyone can rifle through Ashley Madison’s stolen records to dig up sensitive personal information about them, for example.

While the court awaits the names of the plaintiffs in the suit, the plaintiffs are awaiting the judge’s decision about another issue: whether certain evidence will be permitted in the courtroom. Namely, they would like to consider a cache of documents that includes communications between Avid Life executives and their attorneys that had been leaked to the public as part of the data breach.

Such exchanges are normally protected under attorney-client privilege. The plaintiffs’ lawyers argue, however, that these correspondences are exempt because they suspect that the company could be involved in covering up fraud—in this case, the possible creation and deployment of female chatbots on the site, making it seem as though there were more female subscribers than in reality, as Gizmodo’s reporting suggested in the fall.