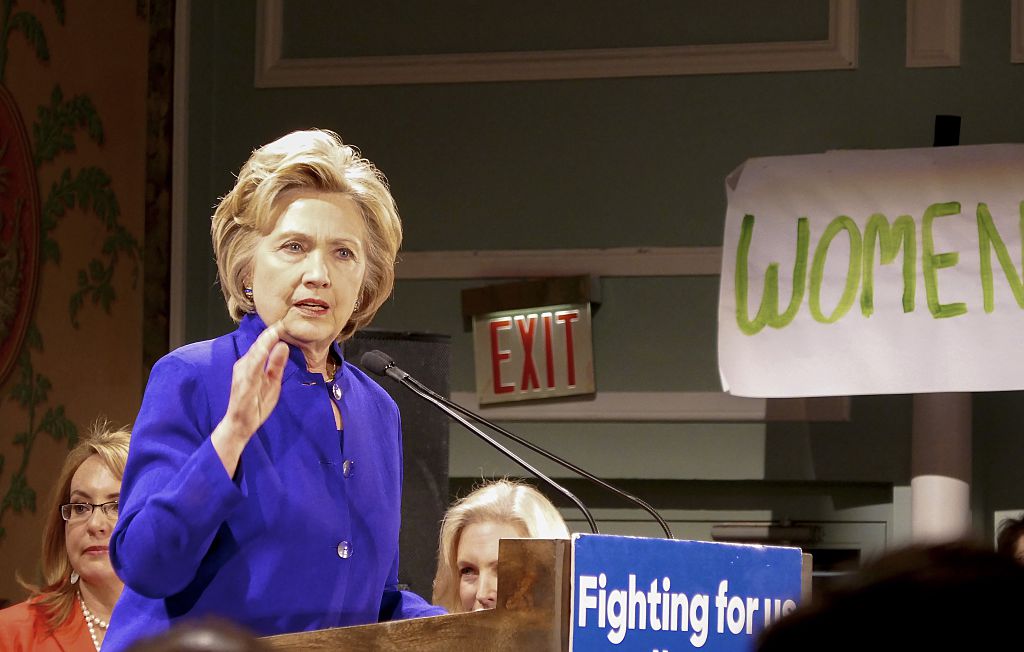 Hillary Clinton threw punches at Bernie Sanders on Monday night, the eve of the New York primary, suggesting that the Vermont Senator has failed to prioritize social issues like gun control and reproductive rights in his fight for the Democratic nomination and drawing cheers from throngs of female supporters.

Clinton doubled down on her strong support for abortion rights and vowed to increase protections against gun violence, emphasizing a broad commitment to social issues over the progressive economic agenda championed by Sanders.

Her supporters bobbed to Taylor Swift and Katy Perry while holding signs that said things like “I’d Vote for Hillary Even if She Were a Man.” One supporter, Gretchen Baer, stood behind Clinton wearing a white pantsuit she’d decorated with drawings of Hillary’s face. And Clinton had her squad in tow: Planned Parenthood Action Fund President Cecile Richards, New York Senator Kirsten Gillibrand, New York City First Lady Chirlaine McCray and mass shooting survivor and former Congresswoman Gabby Giffords all spoke on her behalf at a Women for Hillary event at a Manhattan Hilton.

Clinton came out swinging on abortion rights, an issue which has largely been sidelined on the Democratic side of the race since both candidates are pro-choice.

She used her record as Secretary of State to double down on the importance of reproductive access, citing countries like Romania and China as examples of the atrocities that can occur when the government controls women’s reproductive choices.

“Maybe if some of his people who either think it’s a distraction or who want to reverse it went to some of the places I’ve been over the last 25 years and seen how that is used to suppress women’s rights and their autonomy, and where the government makes decisions, that consequences are horrible,” she said. “We cannot, we must not, ever let governments and politicians make those decisions. And as long as I’m around, we never will.”

Clinton has been endorsed by both Planned Parenthood and NARAL, and Planned Parenthood president Cecile Richards said Monday that American women need a candidate whose record on reproductive issues is “more than just a sound bite.” “We are not going to wait any longer to put a woman in the White House,” Richards said. “And not just any woman. This woman.”

New York City has long been hostile territory for gun rights groups, and former mayor Michael Bloomberg and current mayor Bill De Blasio have both made reducing gun deaths a major priority. Bloomberg, who was mayor for more than 10 years, is one of the co-founders of Mayors Against Illegal Guns.

Clinton appeared to be capitalizing on this strong anti-gun sentiment in the Big Apple when she doubled down on Sanders’s stance on gun control. “I couldn’t believe it when Senator Sanders said the parents of the Sandy Hook children did not deserve their day in court, partly because he voted for the bill that gave special protections, immunity from liability, to the gun makers and sellers,” she continued. “I voted against it, Barack Obama voted against it, Bernie Sanders voted for it,” she said.

Sanders had replied “no, I don’t” when the New York Daily News editorial board asked him earlier this month whether he thought gun victims should be able to sue manufacturers, but he appears to have recently evolved his stance. He said in last week’s debate at CNN that the Sandy Hook families “have the right to sue,” but he doesn’t think gun store owners should face lawsuits for crimes commitments with guns they’ve sold.

The crowd at the event Monday was made up of mostly middle-aged and older women, who cheered and hooted at almost everything Clinton said. New York State Democratic Committee Vice-Chair Trudy Mason said she’s known Hillary for so long that they have “girl talk,” and gossip about “is so-and-so together with so-and-so.” Mason, who wears only red, was sporting a T-shirt of Hillary’s famous pantsuit and said she was a member of a small group of supporters who align themselves with the now-famous “Sisterhood of the Traveling Pantsuits.”

“She’s a mensch,” Mason says. “That’s the greatest compliment I could give anyone.”

The artist in the Hillary-themed pantsuit is also the woman who decorated her car in honor of Hillary. “She’s a woman who gets things done in the world and isn’t afraid to stand out and make changes,” says Gretchen Bear. “And she does look like a ’70s TV mom. I love that about her.”