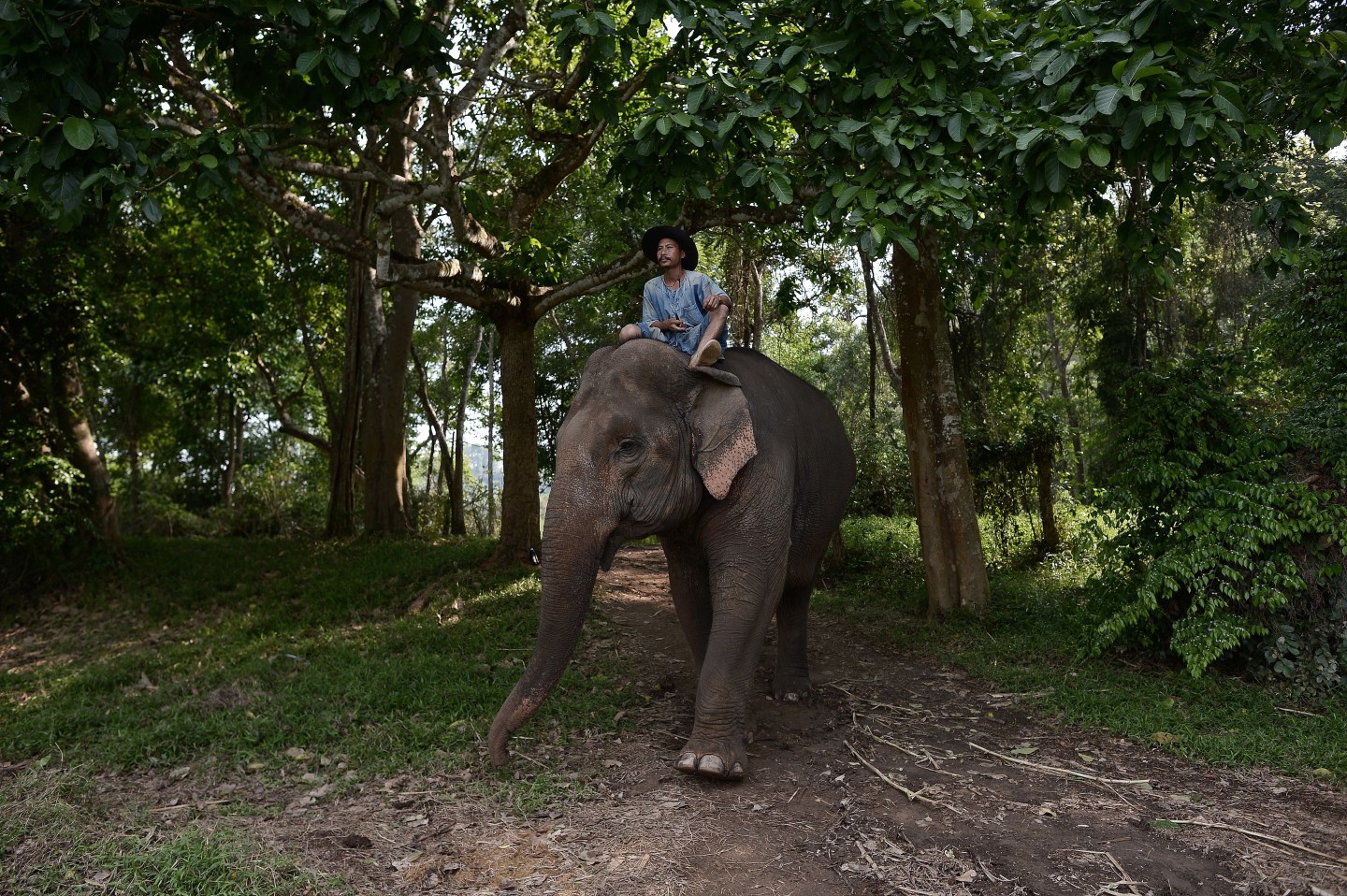 TO GO WITH Thailand-lifestyle-elephant-coffee, FEATURE by Marion THIBAUT This picture taken on April 10, 2015 shows a mahout riding an elephant out of a forest at the luxury Anantara resort, home to the Golden Triangle Asian Elephant Foundation, in the Thai northern town of Chiang Saen, near the border with Myanmar and Laos. In the verdant hills of northern Thailand, a mahout collects a large pile of elephant dung, studded with coffee beans. Ingested by pachyderms the day before, these excreted beans will produce one of the world's most expensive coffees. AFP PHOTO / Christophe ARCHAMBAULT (Photo credit should read CHRISTOPHE ARCHAMBAULT/AFP/Getty Images)
CHRISTOPHE ARCHAMBAULT AFP/Getty Images

Richly hued, cherry-brown rosewood is one of the world’s most valuable timbers. Native across much of Indochina, a cubic meter can fetch $5,000 in Cambodia or ten times that amount once smuggled into China, where the demand for Ming and Qing-style rosewood furniture is enormous. A single ornately carved bed can cost a cool $1 million in plush Shanghai showrooms, meaning the potential profits are tantalizing for impoverished loggers, as well as the traffickers who spirit the lumber across porous frontiers.

However, voracious Chinese demand also means that Siamese rosewood is on the brink of extinction. When the species was finally listed on the Convention on International Trade in Endangered Species of Wild Fauna and Flora (CITES) list in 2013, experts thought that it was the Mekong region that was mostly affected. But the wholesale plunder of once-protected forests in Cambodia and Vietnam, via government land concessions has meant the loggers are increasingly moving west into Thailand, where trees are felled illegally are in large amounts, judging by the seizure of logs on a daily basis.

At a meeting in Bangkok last week, Cambodia, China, Vietnam and Thailand all jointly agreed to give countering Siamese rosewood trafficking the highest priority. According to a statement by the anti-logging NGO Freeland, “agreement by these four countries is considered a step forward in the fight to combat the illegal logging and trade of protected Siamese Rosewood.”

However, experts warn the pact is also driving the gangs to voraciously plunder similar species. These include Padauk and Burmese rosewood (which, like Siamese rosewood, is found across the entire region.) There are in fact 33 species of wood that can be used to make traditional red Chinese hongmu furniture, yet only a handful are included on the protected CITES list.

“Species nobody was interested in ten years ago are now sought after in the timber business,” Marcus Hardtke, an expert on forest issues in Southeast Asia, tells TIME. “If no strong measures are taken now, soon there will be only bushland left in many areas of Indochina.”

The Thais are putting up a fight. Thailand’s eastern forests now resemble war zones. Forest rangers armed to the teeth patrol the jungles on the border with Cambodia, where leopards, Asiatic black bear, elephants, pig-tailed macaques and even tigers roam wild. On Tuesday, Thailand’s Ministry of Natural Resources and Environment announced the purchase of almost 4,000 additional shotguns for its forest rangers. The loggers are themselves packing AK47s and hand grenades along with their chainsaws. Dozens have been killed on both sides of this conflict in recent years.

The stakes are extremely high. According to a 2014 Environmental Investigation Agency report From 2000 to 2013, China imported a total of 3.5 million cubic meters of hongmu timber worth $2.4 billion. Not even China’s unprecedented anti-corruption purge, which makes conspicuous consumption and ostentatious displays of wealth incredibly risky, seems to be slowing this trend. Once-ignored trees are now of great value to impoverished loggers, who are unlikely to be deterred for as long as they can carry away a block of wood worth several thousand dollars on the back of a motorbike. As each rare species is plucked clean, Chinese consumers are happy embrace the next more common alternative, depleted the forests at an exponential rate.

According to Yi Lan, deputy head of forests and ocean campaign for Greenpeace East Asia, the only answer is for China to pass and implement regulations similar to the E.U. Timber Law and the U.S. Lacey Act Amendment to stop illegal timber imports. Currently, an estimated one fifth of all the timber entering China does so illegally and with help of corrupt officials. “We hope that protection can be expanded beyond the CITES framework and beyond a single species to encompass the global illegal timber trade,” she says.

Legislating to take hongmu furniture out of Chinese showrooms is the way forward. This will not only protect forests; it will also save lives. Already Thai forest rangers no longer sleep overnight in the jungle as it has simply become too dangerous. “Unless they do much, much more to regulate the demand side, they’re not going to stop the trade,” says Tom Johnson, head of research at environmental investigations NGO Earthsight. Instead, he says, smugglers will “Just kill more people.”