Why Isn’t Kanye West Being Hurt by His Epic Meltdowns? 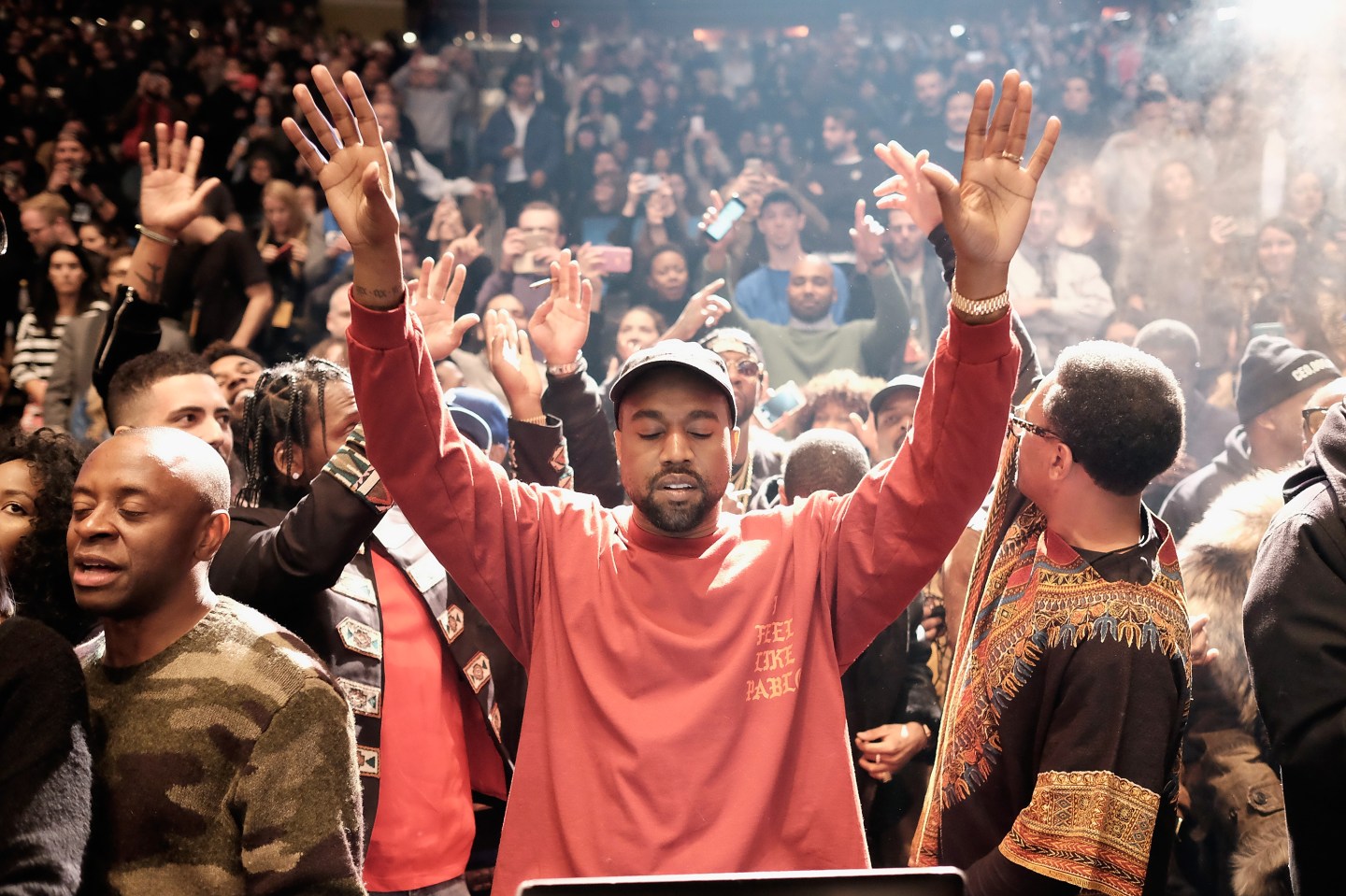 Congratulations, Kanye West! The hip-hop artist’s latest album, “The Life of Pablo,” has topped the Billboard 200 chart, making it the seventh album of his career to hit number one.

West’s chart dominance is all the more remarkable when one considers that he appeared to be going through some kind of public meltdown just a couple of months ago. He kicked it off on February 9 with a tweet proclaiming comedian Bill Cosby innocent of the rape allegations leveled against him. One week later, extremely not-safe-for-work audio was leaked, featuring a massive tantrum thrown by the artist backstage at “Saturday Night Live.”

West rounded out the month by taking to Twitter yet again, this time to blast Bob Ezrin. The producer of such classic albums as Pink Floyd’s “The Wall,” Ezrin had called West’s music “sophomoric at best.” The rapper responded with a series of tweets in which he expressed pity for the producer’s children and called him “everything that is wrong with the old guard.”

It all made up for the kind of month that a publicist would not want to have. But despite a solid month of questionable behavior, the chart dominance of “The Life of Pablo” shows that West paid no price for his prolonged tantrum.

Common sense would seem to dictate that a public meltdown such as this one would do some kind of lasting damage to a celebrity’s career. Indeed, many a celebrity has thrown a tantrum, had a meltdown or behaved in an otherwise generally unacceptable fashion, never to be heard from again. But it’s not a hard and fast rule by any means.

Many celebrities have had full public unravelings that appeared absolutely fatal to their careers, only to bounce back. Sometimes, they even came back and found more success than they had in their pre-meltdown days.

It’s hard to say exactly why some celebrities survive meltdowns while others don’t. Some seen to have won public sympathy by being contrite, and honest with fans about what caused them to snap. Others have had trips to jail or rehab, which perhaps gave them time to reboot their brands. And still others, like Kanye, seem to just be Teflon — the public continues to love them in spite, or because, of their meltdowns.

Fortune presents a look at five celebrities who pulled a Kanye, by surviving a career-threatening meltdown and coming back stronger than ever.

With 64 million albums sold, Mariah Carey is one of the best-selling artists in music history, but in July 2001 her public behavior became alarming and erratic enough to put her viability as an artist into question. She paid an unannounced visit to the set of MTV’s “Total Request Live” and performed an impromptu striptease, then left two very long messages to fans on her official website that could only be interpreted as cries for help.

"So basically all I really wanna say is I don't know what's going on with life, and I hope all the fans are good and I just want you to know that I'm trying to understand things in life right now and so I really don't feel that I should be doing music right now,” she posted to her official website. Shortly thereafter, On July 26, 2001, MTV reported that she checked into a hospital for treatment of “extreme exhaustion.”

The breakdown was followed by a period of a few years that saw Carey rebuild her career. In 2005 she released the album “The Emancipation of Mimi,” and it returned her to her former glory, debuting at number one on the Billboard chart and eventually going on to sell over 6 million copies.

Crowe’s reputation was threatened in 2005 when he was charged with second-degree assault and fourth-degree criminal possession of a weapon for throwing a telephone at a hotel concierge. According to the complaint, the telephone in the actor’s room didn’t work, and according to Crowe’s lawyer, “there was a disagreement" between actor and concierge. This led the thespian to hurl the telephone at the concierge "because he was angry," according to the Manhattan District Attorney's Office. Crowe settled out of court for an undisclosed sum and pleaded guilty to charges in connection with the incident.

According to Box Office Mojo, Tom Cruise’s entire filmography has earned $8.6 billion worldwide. Indeed, ever since his breakout film, 1983’s “Risky Business,” he’s made being an A-list actor look easy. That is, until 2005, when his behavior jeopardized his career, an ironclad commodity up to that point.

He appeared on “The Oprah Winfrey Show” to profess his undying love for actress and then-girlfriend Katie Holmes, demonstrating said love by jumping up and down on the billionaire host’s couch. Weeks later, he appeared on NBC’s “Today” show and became bizarrely hostile to host Matt Lauer when the topic of discussion turned to psychiatry.

In 2006, Paramount Pictures ended its 14-year relationship with his production company, Cruise/Wagner Productions, citing the actor’s behavior. "As much as we like him personally, we thought it was wrong to renew his deal," said Sumner Redstone, the former CEO of Paramount Pictures. "His recent conduct has not been acceptable to Paramount."

The rise, fall and rise of actor Robert Downey Jr. is one of the most extreme cases of celebrity rebound. He first gained notoriety in the 1980s for such films as “The Pickup Artist” and “Less Than Zero,” and he earned an Oscar nomination for his portrayal of Charlie Chaplin in 1992’s “Chaplin.”

His promising career was derailed by a penchant for drugs. In one instance, police officers found him with heroin, cocaine and a .357 Magnum, and in a 1999 court appearance, he described his appetite for drugs to a judge, in chilling terms. "It's like I have a loaded gun in my mouth and my finger's on the trigger," he said. "And I like the taste of the gunmetal." The actor would later spend a year in jail.

Eventually, his sobriety stuck, and he worked diligently towards rebuilding his career. Ultimately, he so rehabilitated his reputation that he landed the starring role in “Iron Man.” It earned $318 million domestically, and the entire “Iron Man” trilogy went on to earn $2.4 billion at the worldwide box office. And let’s not forget his starring roles in “Marvel’s The Avengers” and “Avengers: Age of Ultron,” which earned a combined $2.9 billion worldwide. All told, Robert Downey Jr. has been good for over $5 billion worldwide.

Pop singer Britney Spears signed to Jive Records in 1997 at the age of 16, and produced 1999’s “Baby One More Time” and 2000’s “Oops!... I Did It Again,” both of which topped the Billboard charts. But by 2007, the life of the innocent teenager who had ensnared the hearts of pop fans was quickly unraveling. She had divorced her husband Kevin Federline, and her aunt, to whom she was described as “very close,” had died of ovarian cancer.

The public may not have been aware of her personal difficulties, but that changed when she walked into a Tarzana, California hairdressing salon and shaved her own head. Soon after, she was seen attacking a paparazzo’s car with an umbrella. Finally, she appeared at the MTV Video Music Awards in a widely panned performance for which she was clearly under-rehearsed. Fans came to her defense, but it did little to change the perception that she was in the clutches of a swirling miasma of despair.

Spears eventually got back to making music and found her voice again, and the reception she received from her fans was as though she had never gone away. Her 2008 album “Circus” debuted at the top of the Billboard charts, and the 2009 tour to support the album grossed $132 million. Today, she continues to tour and record, most recently releasing the collaboration with Iggy Azalea, "Pretty Girls," in May 2015.