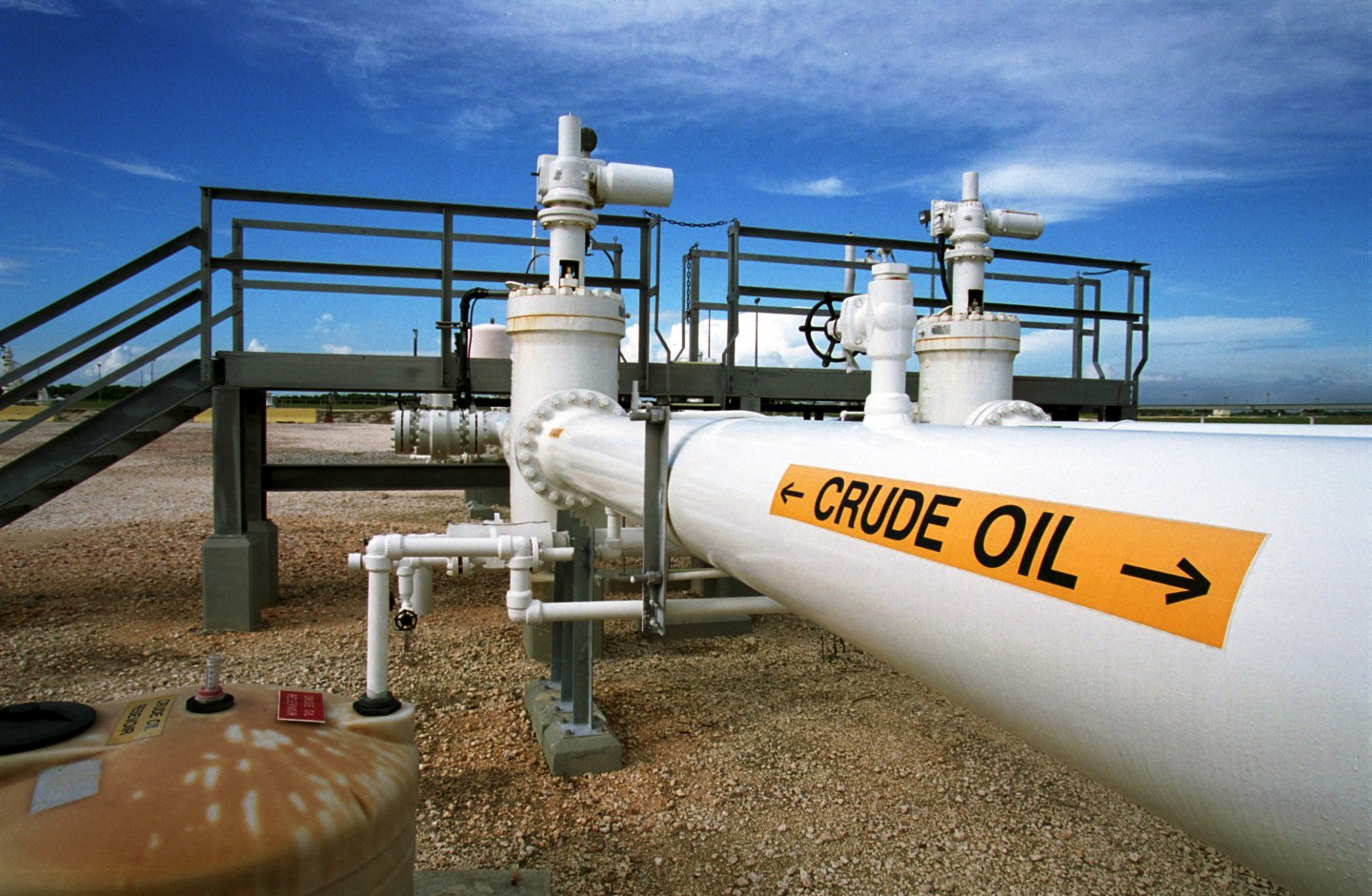 378796 09: A pipeline carries oil September 20, 2000 at the Federal Strategic Petroleum Reserve facility known as Big Hill near Beaumont, Texas. It is one of four crude oil storage sites run by the U.S. government that could be tapped to ease the oil crisis. The Big Hill facility has 14 underground solution-mined storage caverns that have a combined storage capacity of 160 million barrels. The site has demonstrated the capability to deliver crude at 930,000 barrels per day. The Big Hill site is connected via a 25-mile, 36-inch pipeline to the Sun Marine Terminal and the Unocal Marine Terminal at Nederland, Texas. The pipeline also interconnects with the Texaco 20-inch pipeline system in Port Arthur, Texas. The reserve, created in 1975 after the Arab oil embargo, is intended to provide a stopgap in case of disruptions in oil imports. It has been used only once, during the Gulf War in 1991. (Photo by Joe Raedle/Newsmakers)
Photograph by Joe Raedle — Getty Images

Crude oil prices settled lower on Friday after the U.S rig count rose for the first time since December, renewing worries of a supply glut after an output freeze proposal helped boost the market to 2016 highs and multi-week gains.

U.S. energy firms this week added one oil rig after 12 weeks of cuts, according to data by industry firm Baker Hughes. The addition, coming after oil rigs had fallen by two-thirds over the past year to 2009 lows, showed crude drilling picking up again after a 50% price rally since February.

“The rig count and crude prices have a direct relationship for sure,” said Pete Donovan, broker at Liquidity Energy in New York.

Despite the retreat, oil posted multi-week gains, with Brent up for a fourth straight week and U.S. crude a fifth week in a row. Both benchmarks rose about % this week.

Global oversupply in oil had knocked crude prices down from mid-2014 highs above $100 a barrel to 12-year lows earlier this year, bringing Brent to around $27 and U.S. crude to about $26.

Over the past two months, prices rallied to above $40 after the Organization of the Petroleum Exporting Countries (OPEC) floated the idea of a production freeze at January’s highs.

The combination of declining oil output, smaller crude stockpile builds and surging gasoline consumption in the United States also helped the recovery, although some analysts said the rally had been overdone.

“The market is probably too long here and needs a correction,” said Scott Shelton, energy futures broker with ICAP in Durham, North Carolina.

Money managers raised their bullish bets on U.S. crude to a five-month high during the week to March 15, data from the U.S. Commodity Futures Trading Commission showed.

Some traders who had been bearish oil and lost money recently were eyeing fresh bets to price crude lower.

“I think this rally will stall,” said Tariq Zahir, who profited mostly over the last year on bets that U.S. crude for nearby delivery will fall against longer-dated contracts. “I took off several shorts and booked losses but on the first sign of weakness, I’m jumping back in.”