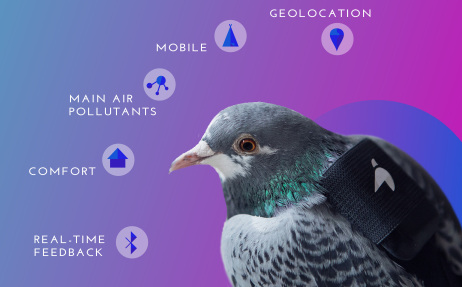 In perhaps the most literal use of social media ever, a Paris-based air quality monitoring company called Plume Labs (layers upon layers here) has teamed up with Twitter’s UK division to equip a flock of pigeons with tiny backpacks carrying air monitoring equipment. Those birds (or, okay, their internet-connected backpacks) spent last week providing local pollution readings to Londoners who tweeted to them at @pigeonair.

They’re called the Pigeon Air Patrol, and there are ten of them. The idea was cooked up by marketing company DigitasLBi, and was the 1st-place idea in the 2015 Powered by Tweets exhibit and competition at the London Design Festival.

It’s an interesting example of putting Twitter’s [fortunate-stock symbol=”TWTR”] interactivity and liveness to use, and seems to have sparked a lot of conversation about pollution in London. While the U.K.’s capital might not hold a candle to deadly locales like Beijing or Mumbai, London does have serious air quality problems, thanks to auto emissions, residential emissions, and dust from the Sahara Desert.

For more on technology and animals, watch our video:

The Pigeon Air Patrol is part of the larger Air Patrol project, which is calling on humans to wear Plume’s personal air pollution trackers as part of a crowd-sourced map of pollution patterns in London.

According to the projects’ organizers, the backpacks are “light as a feather,” and so far, it doesn’t seem PETA is ruffled.