These 5 Cases Explain the State of Global Corruption 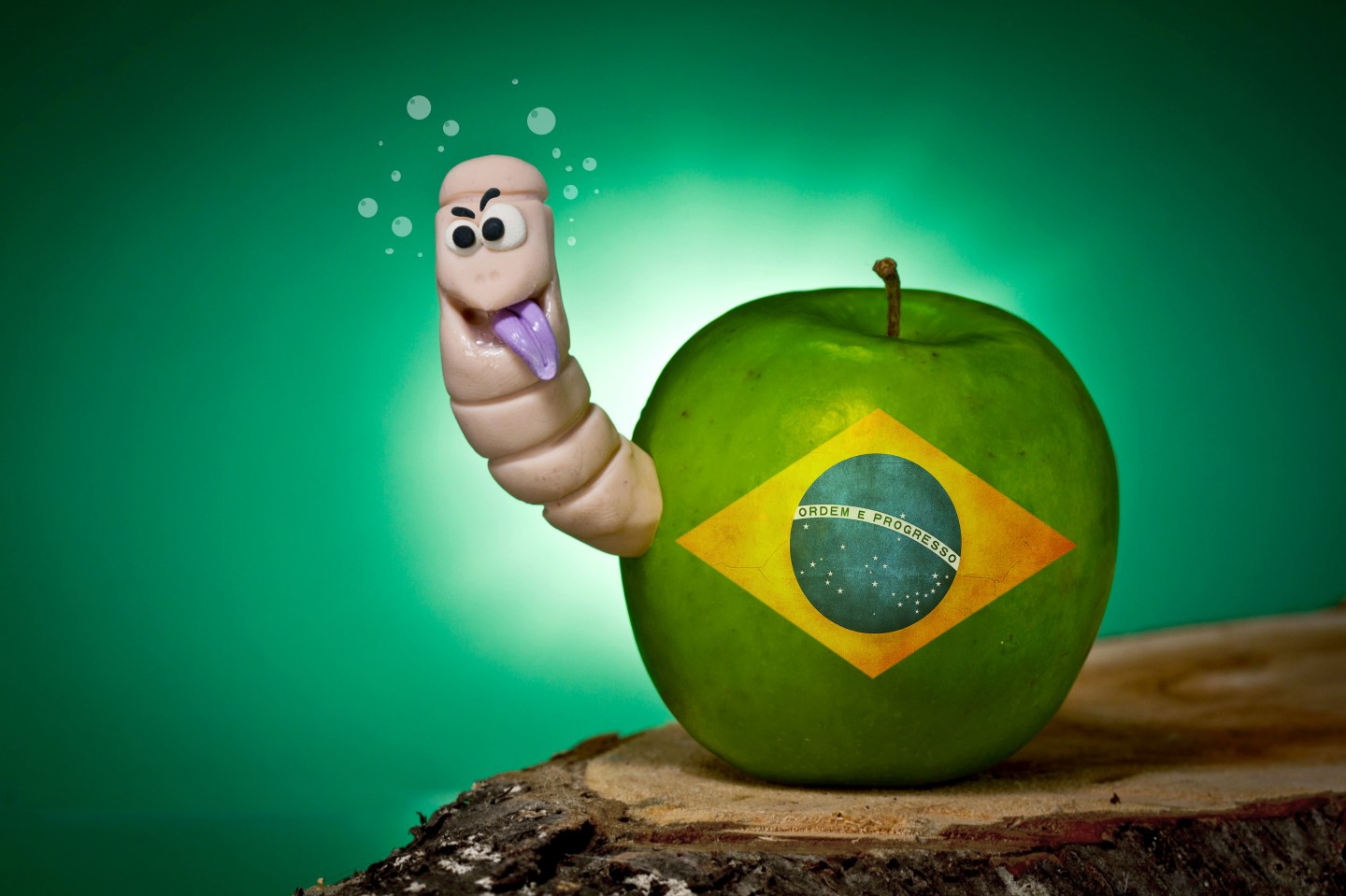 Brazil’s so-called Car Wash corruption scandal, which appears on the verge of bringing down a president, centers on Petrobras, the state-run oil giant. Last March, a top Petrobras official admitted that the company was awarding contracts in exchange for bribes, some of which were diverted to political slush funds. Brazil’s current president, Dilma Rousseff, was energy minister and chairwoman of Petrobras when the alleged kickbacks took place, though she has yet to be directly implicated in any wrongdoing.

But with an approval rating of just 21.8 percent, plenty of Brazilians see her as guilty by association—55.6 percent of Brazilians want to see her impeached. Former president and Rousseff mentor Luiz Inácio Lula da Silva was recently detained for questioning by police. Dozens of politicians are now under investigation, the vast majority of whom belong to Rousseff’s party. This is a country with a long history of official corruption: Four of five living former presidents are currently under investigation for one thing or another.

Tensions boiled over this weekend, and some 3 million Brazilians took to the streets. This type of social unrest would be a worrying sign for the country’s economy, but the Brazilian stock market surged 18 percent on news of Lula’s detention and speculation that Rousseff might finally be impeached—speculation that will grow stronger with the news that Rousseff may have offered Lula a cabinet post to help give him greater immunity from foreign prosecutors. And that’s the main takeaway here: Brazil is a country with a genuinely independent and empowered investigator capable of putting the country’s most powerful under a public microscope. Anti-corruption drives can create political chaos in the short-term, but they can benefit the country in the long-term if sunlight is used properly as a disinfectant.

(Bloomberg, The Guardian, The Economist)

That’s not the case with Malaysia. In 2009, Malaysian Prime Minister Najib Razak established a sovereign wealth fund called 1Malaysia Development Berhad (1MDB) to help the country attract foreign investment and boost its economy. Long story short, by 2015, 1MDB owed investors $11 billion. As investigations of the state fund got underway, it was revealed that $681 million dollars had been deposited into Najib’s personal account. The prime minister copped to the money transfer, but claimed it was a “gift” from the Saudi royal family, about $620 million of which he says he has returned. Two weeks ago, the 1MDB investigation uncovered that the total routed into Najib’s personal account was actually about $1 billion.

Malaysia is a de facto one-party country. All of the country’s six post-independence prime ministers have come from the United Malays National Organization (UMNO). That’s why Najib owes his position to his party, not to the Malaysian people—good news for a man currently polling at 23 percent, the lowest ever for a Malaysian head of government. He has spent the last half-decade strengthening his position within UMNO, and the past year since the 1MDB scandal broke purging his party of potential adversaries. This past summer, Najib fired his attorney general, who had been leading the 1MDB investigation. Malaysia exemplifies how corruption drives can fall short in countries with a single political party and weak governing institutions.

Half a world away, South Africa tells much the same story. Like Najib, South African president Jacob Zuma has been dogged by corruption allegations for years. Most recently, Zuma has been accused of improperly using taxpayer money for “security upgrades” to his personal residence. These include construction of an amphitheater, a swimming pool, and a chicken run—because you can never be too careful. As of this writing, a South African court is hearing a case to reinstate 783—the actual number—corruption charges against him, which include pocketing kickbacks associated with arms deals. But like Najib, Zuma’s power comes from effective control of his political party rather than directly from the people—just 36 percent of South Africans approve of Zuma’s job performance in 2016, down from 64 percent in 2011. Don’t expect South Africa’s anti-corruption push to amount to much because this is a country where investigators are empowered to bring damaging allegations to light, but not to enforce their judgments. Zuma will probably survive through the end of his term in 2019.

In China, it’s the leader who runs the investigations. President Xi Jinping has presided over a far-reaching anti-corruption campaign, with a particular emphasis on curbing wasteful government spending. Over the last three years, punishments have been handed down to 750,000—also the actual number—party members. Corruption inspection teams have more than doubled their staff in recent years, and have gotten a boost from the Chinese people—since 2013, corruption inspectors have received more than 270,000 tips from the Chinese public. Beijing even launched a WeChat account in January to make reporting graft easier.

Of course, the anti-corruption push is politically useful for Xi. Aside from dealing with the country’s real corruption problem, the campaign aims to restore public confidence in the ruling party at a time when the Chinese economy is slowing. It also helps that the anti-graft crackdown ensures that Xi can sideline opponents of his political agenda ahead of next year’s leadership transition in which five of seven members of the Politburo Standing Committee, the pinnacle of the country’s leadership, are scheduled to be replaced.

The Kremlin has Russia’s corruption problem fully under control. At least that’s what the 90 percent of Russians who get their news from state-dominated media have been told. Vladimir Putin currently has an approval rating of 83 percent, so the message seems to be getting through. But non-Kremlin sources tell another story. On a scale of 1 to 7 where 7 is “most corrupt”, Freedom House ranks Russia a 6.75. This is a country where corruption investigations are tools used by one political/business faction to cut into another’s market share. These are not the kinds of investigations that strengthen a country or its economy.