Hybrid Drone-Blimps May Be Flying Billboards of the Future 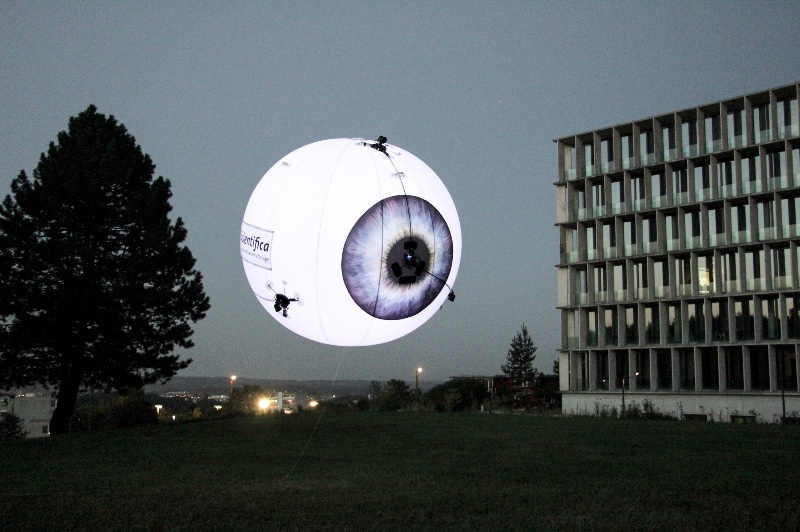 A Swiss company is tackling one of the key challenges to drone-based advertising by using a new kind of unmanned aerial vehicle that’s part blimp, part quadcopter. Known as Skye, the bulbous, spherical aircraft is soft and slow-moving, making it safe to fly near crowds.

That addresses one of the key challenges that has kept companies from using drones for advertising. Although drones would be ideal for flying aerial billboards over sporting events, concerts, and other public gatherings, safety regulations generally restrict drones from taking flight near the very crowds that advertisers want to reach.

Built by Aerotain, a spin-out company from Swiss university ETH Zurich, Skye is essentially a 10-foot-diameter helium balloon propelled by four electric motors that each drive an encased propeller. An onboard computer keeps the vehicle stable and moving in the proper direction. Because the helium provides most of the lift, the drone is very energy efficient and can stay aloft for roughly two hours on a single charge (compared to 20 to 30 minutes flight time for most consumer quad-rotor drones).

It’s soft-sided body means the aircraft can fly right up to crowds and even interact with them—there’s no harm in touching the aircraft, and it has enough power to carry a cameras or other small payloads that would allow for interactive advertising or livestreaming. And if it loses power or malfunctions in some way? “It becomes a huge balloon and people could play with it,” Aerotain co-founder Daniel Meier tells Reuters.

Naturally, the aircraft’s exterior can be customized with any kind of ad a customer desires. And given that it’s somewhat difficult to ignore a giant orb hovering overhead, Aerotain is betting that advertisers will see the potential, although its unclear how regulators like the Federal Aviation Administration would classify the vehicle or if it would fall under the same restrictions as conventional propeller-driven drones, which are generally forbidden to fly over heavily populated areas and require FAA permission to fly for commercial purposes.