Here’s Why the U.S. Military Is a Family Business 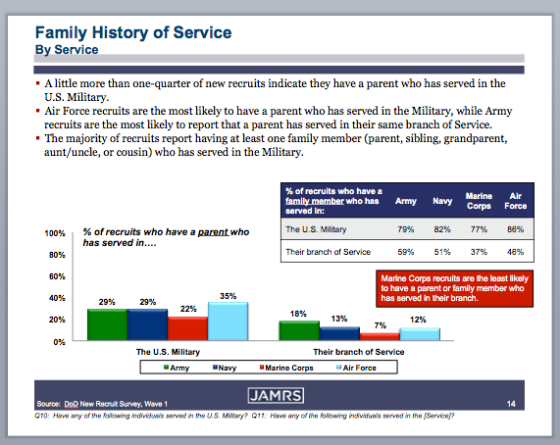 Enlisting in the U.S. military used to be a rite of passage for many young American men. But since the draft ended in 1973, being born into a military family has become a much more important marker of a future in the U.S. armed forces.

The draft once acted as a national eggbeater, whipping young men of different creeds, races, economic circumstances and other divergent backgrounds into a unified fighting force. But Pentagon data show that 80% of recent troops come from a family where at least one parent, grandparent, aunt or uncle, sibling or cousin has also worn their nation’s uniform. More than 25% have a parent who has served.

The subject surfaced at a Senate Armed Services Committee subcommittee hearing Tuesday, when Senator Angus King, (I-Maine), questioned the reliance of the U.S. military on relatives of those who have served. The U.S. armed forces had 3.5 million troops at the peak of the Vietnam War—more than double the 1.4 million it had during the post-9/11 wars. That means the pool of potential recruits in the future who had a close relative who served will also shrink. “This going to put more pressure on the non-family member recruiting,” King said Thursday. “We’ve got to reach outside the bloodlines.”

Such military service “has been part of our history for a long time,” King added. “It’s wonderful that we have people that have this tradition in their families and they continue to honor it—that’s a good thing. The only question I had was does the mathematics suggest that at some point in the future we’re going to have make greater efforts to broaden the pool.”

“Eighty-two% of Navy recruits have had a family member serve in the U.S. military, which is a concern to us,” says Lieut. Commander Nate Christensen, spokesman for the Chief of Naval Personnel. “We believe that this limits both the talent pool from which the Navy draws, as well as the diversity of background in our force, and ultimately could lead to a civil-military divide.”

The report also noted how many of those recruits went into the same service as their kin. Relatives are what the military calls key “influencers” because of their ability to steer young people into, or away from, the military. While 59% of Army recruits whose close relatives had served in uniform said they had a relative who had served in the Army, that was true for only 37% of Marine recruits. The Air Force (46%) and Navy (51%) fell in between.

This has been a recurring topic of discussion in recent years. David Barno, a retired three-star Army general who had two sons in the service, said the isolation of modern military life has tended to increase sons and daughters following in their parents’ footsteps. “It’s a family business,” Barno told TIME in 2011. “It’s an ever-decreasing circle of folks on these isolated military posts who raise their own kids and send them into the force.” The Pentagon was unable to provide additional information showing how recruits’ family background has changed over time.

Army personnel chief Lieut. General James McConville highlighted the issue at Tuesday’s hearing, when he discussed the pain he felt at having to force young men and women out of uniform as the Army shrinks after the major wars in Afghanistan and Iraq. As “the father of three soldiers,” he said in his opening statement, “it breaks my heart that we have to involuntary separate soldiers who have served so honorably during this time of conflict.”