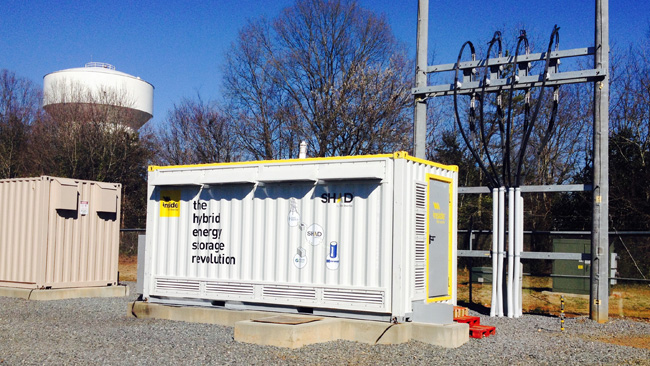 Giant utility Duke Energy is testing out a strange hybrid form of batteries at a substation in North Carolina.

The project uses batteries made by startup Aquion Energy combined with ultracapacitors made by Maxwell.

Ultracapacitors are like a battery, but store energy in an electric field instead of a chemical reaction. Ultracapacitors can provide short bursts of high power, while the grid batteries can deliver lower sustained power over several hours.

The energy storage devices will be managed by software that enables Duke Energy to use the technology for various purposes.

A solar panel system plugs into the grid about a mile from the Duke Energy’s substation and the batteries can store the energy from the solar system to be used when clouds cover the sun, or during night when the sun goes down. The ultracapacitors can also reduce some of the stress on the batteries and extend their life.

The unusual combination shows how utilities are still experimenting with the optimal ways to use energy storage for the power grid. While the energy industry agrees that storage will be a massive industry one day, it’s still early days for figuring out exactly what will be the most useful applications and technologies.

Some utilities and companies are starting to use lithium-ion batteries—similar to the ones used in laptops—to make the power grid more flexible and robust. Tesla (TSLA) CEO Elon Musk has said demand for Tesla’s grid batteries has been enormous.

The market for energy storage in the U.S. grew 243% last year and is expected to reach a value of $2.5 billion by 2020, according to GTM Research.

Aquion Energy makes low cost, non-toxic batteries made from salt water, carbon and manganese oxide. The company churns out its batteries at a factory just outside of Philadelphia in Pennsylvania. The technology was developed by founder Jay Whitacre, a professor of materials science at Carnegie Mellon University.

The nine-year-old company has been backed by over $100 million from investors including Kleiner Perkins, Bill Gates, Tao Invest (the fund of billionaire family the Prizkers, who also own Hyatt hotels), Hong Kong–based fund Yung’s Enterprise, and Russian firm Bright Capital. Aquion started shipping its batteries in 2014.

Maxwell (MXWL) has been making ultracapacitors for the past several decades. The company makes the technology for applications like hybrid buses in China. Ultracapacitors are commonly used in conjunction with batteries for hybrid electric vehicles.