Books to Read This Spring That Will Make You More Productive 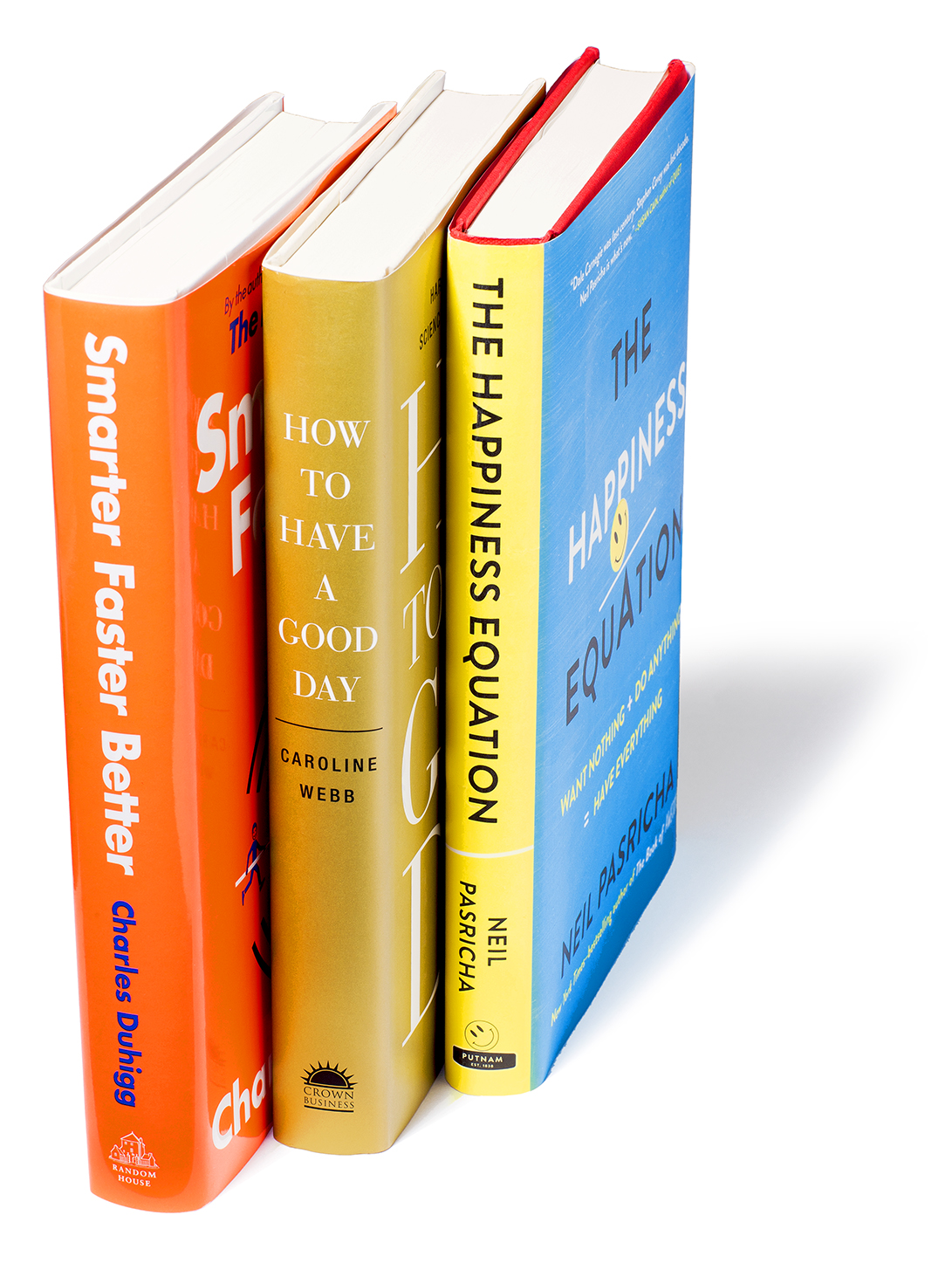 BOOKS: SMARTER FASTER BETTER BY CHARLES DUHIGG; HOW TO HAVE A GOOD DAY BY CAROLINE WEBB; THE HAPPINESS EQUATION BY NEIL PASRICHA
Photograph by Michael Chini for Fortune Magazine

How to Have a Good Day: Harness the Power of Behavioral Science to Transform Your Working Life, by Caroline Webb

The title How to Have a Good Day might suggest a collection of well-meaning but nebulous homilies about life. This work is just the opposite. Economist and former McKinsey partner Caroline Webb has crafted a practical primer. Most of the advice is tailored to the work world, but with a twist: Her insights are rooted in behavioral science from the likes of Nobel Prize-winning psychologist Daniel Kahneman. So when she advises you how to structure your day to maximize creativity (avoid multitasking, batch together similar challenges, and take breaks), she’s not just riffing or sharing bromides; she’s offering wisdom based on the science of how human beings actually operate. —Nicholas Varchaver

TIP: If everybody instantly agrees that a certain plan is right, challenge it. Play devil’s advocate, make others find an objection, or go through the exercise of doing a postmortem before the fact.

The Happiness Equation: Want Nothing + Do Anything = Have Everything, by Neil Pasricha

Ecclesiastes could have told you as much. Wealth and success do not lead to happiness. In fact, they can yield the opposite. While the biblical book deals with the age-old challenge via poetry and prose, author Neil Pasricha has opted to blog his way out of this pickle.

In The Happiness Equation, Pasricha, a popular online writer, takes readers on a sprawling, informal, and entertaining tour of the field of positive psychology, complete with hand-drawn scribbles and plenty of exclamation points for good measure. His well-being hacks aren’t exactly new, but they’re useful. Happiness is about behavior change. Take brisk walks. Reduce the number of decisions you make. Don’t retire, ever. Change your routine first, and your emotional health will follow suit. —Scott Olster

TIP: Pasricha’s ninth and final “secret” to happiness: Don’t always take advice. Most pearls of wisdom conflict with one another (even in good books). Trust your gut.

Smarter Faster Better: The Secrets of Being Productive in Life and Business, by Charles Duhigg

Instead of presenting a unified theory of self-improvement, Pulitzer Prize winner Charles Duhigg’s latest book is a jaw-droppingly well-sourced series of rules and tips assembled from a range of case studies in productivity best practices. At Google (GOOG), researchers found that who you put on a team matters less than the group’s social norms (everyone should talk in meetings, everyone should feel safe sharing even bad ideas). At Disney (DIS), directors embrace the terror of brainstorming on a deadline, and at GE (GE) employees develop stretch goals as well as incremental ones to help realize them. Duhigg even profiles a nursing home, finding that the healthiest seniors are the ones who rebel against the system. Some rules, it turns out, should be followed more closely than others.—Anne VanderMey

TIP: If you read a new idea in a book, force yourself to stop and explain it to someone. Doing anything with new information makes it easier to digest and retain.

A version of this article appears in the March 15, 2016 issue of Fortune with the headline “Self-Improvement Through Data.”