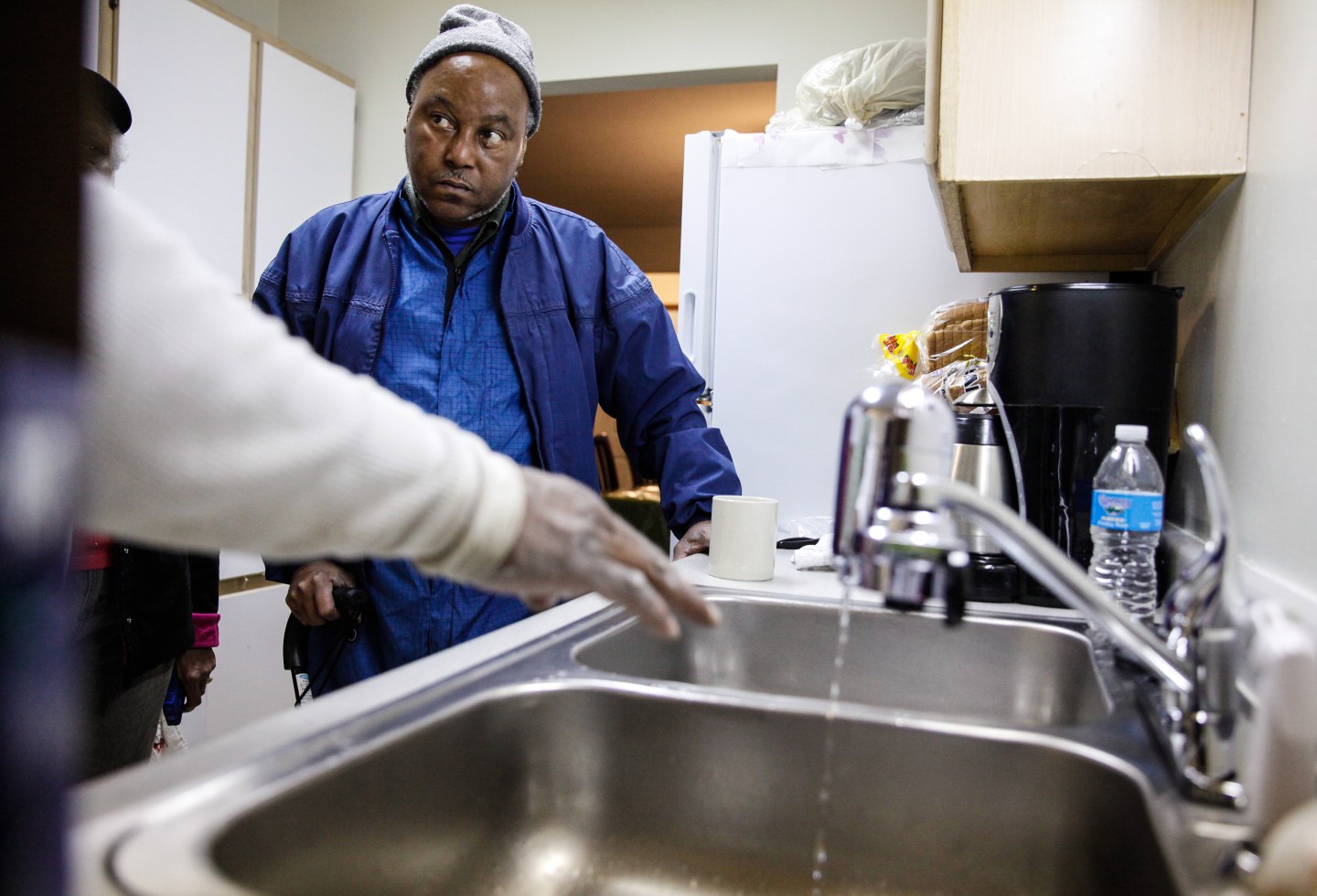 FLINT, MI - JANUARY 21: Fred the handyman explains the new water filter to Terrence Tyler at their residence in Shiloh Commons January 21, 2016 in Flint, Michigan. The city's water supply had been contaminated by lead after a switch from Lake Huron to the Flint river as a source in April, 2014. At a local fire station, residents were provided with water testing jugs, filters and clean water brought in by the National Guard. Residents also brought in water samples from their homes which would be sent out for lead testing. (Photo by Sarah Rice/Getty Images)
Photograph by Sarah Rice—Getty Images

Michigan Governor Rick Snyder has urged federal officials to reconsider their denial for funds to help deal with the crisis caused by lead-contaminated water in the city of Flint, his office said on Thursday.

The contamination and the state’s long delay in addressing the problem have sparked outrage and drawn attention from U.S. presidential candidates.

In the latest appeal to the Federal Emergency Management Agency, Snyder is requesting money to pay for food, water and other essential needs; the removal of health and safety hazards; activation of emergency operations centers; measures to avoid further damage; and homeowners’ repairs not covered by insurance.

A FEMA spokesman said Snyder’s appeal was under review by the agency.

The agency turned down an earlier request for financial help in January because the areas in which Snyder requested aid were deemed not appropriate, but has provided non-monetary support in the form of a FEMA coordinator.

Snyder said on Thursday that Flint needed continued local, state, federal and national efforts. “Assistance from our federal partners could go a long way in moving Flint forward,” he said.

Activists and some Democratic state lawmakers have demanded that Snyder resign, but a spokesman said the Republican governor had no intention of stepping down.

Snyder is scheduled to testify before a U.S. congressional committee on March 17.

Also on Thursday, Snyder said the federal government approved a waiver allowing for Medicaid coverage for children and pregnant women in Flint.

Flint, a predominantly black city of 100,000 about 60 miles (100 km) northwest of Detroit, was under the control of a state-appointed emergency manager when it switched the source of its tap water from Detroit’s system to the Flint River in April 2014.

The city switched back last October after tests found high levels of lead in blood samples taken from children.

Water from the Flint River, which was more corrosive than Detroit’s, leached lead from the city’s pipes, posing widespread health risks.

Experts have said it could take some time for anti-corrosive chemicals now being added to the water to re-coat pipes so that they will not leach more lead.

Meanwhile, Flint officials said they would begin replacing lead pipes running to homes with copper on Friday as part of a $55 million project.