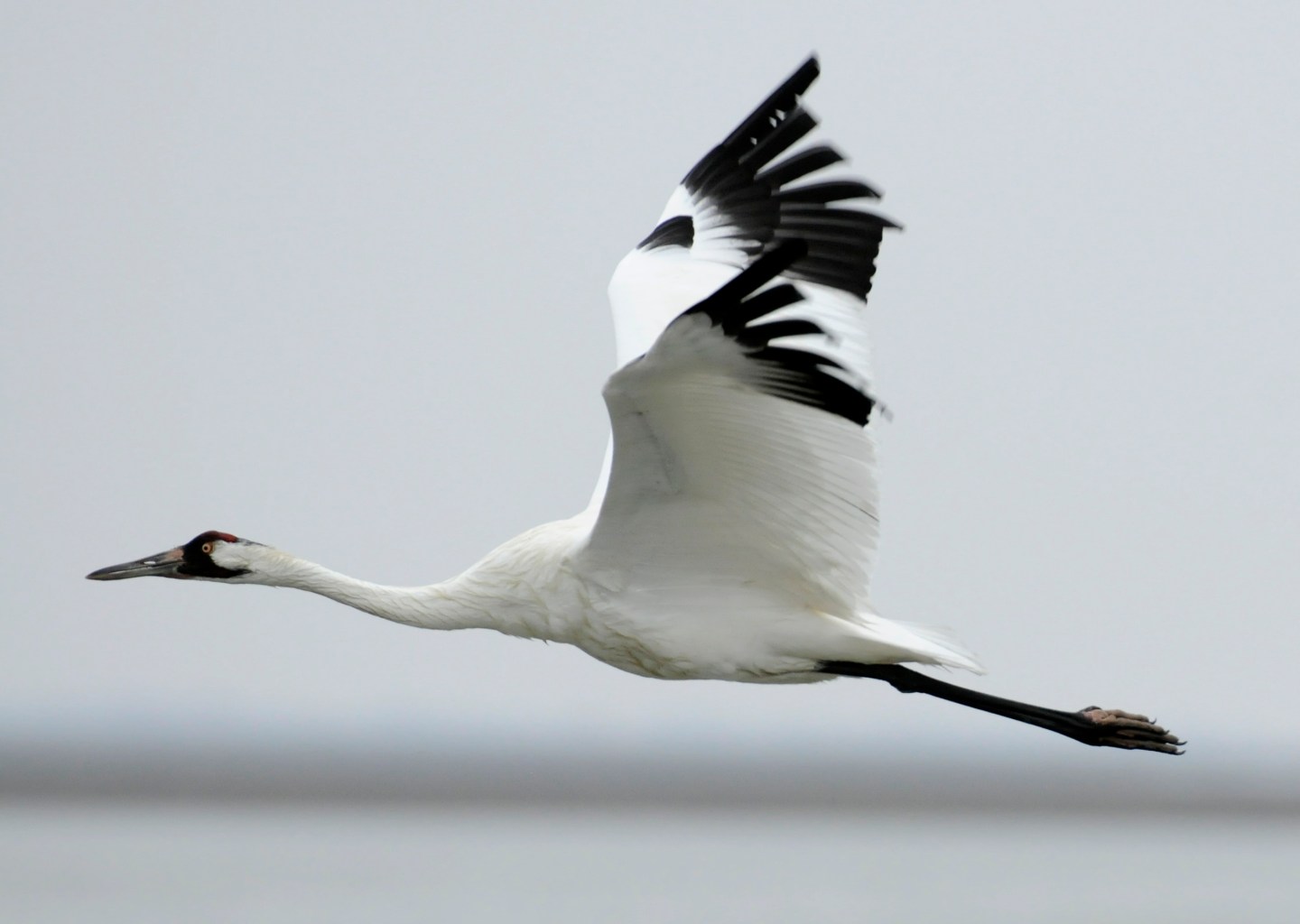 A whooping crane flies Dec. 17, 2011, over the Aransas Wildlife Refuge in Fulton, Texas. Scientists are concerned a devastating drought could hurt the recovery of the 300 endangered whooping cranes that winter in Texas. (AP Photo/Pat Sullivan)
Photograph by Pat Sullivan — AP

International criminal syndicates have been engineering industrial-scale killings of elephants, tigers, turtles and other fish and animal species. Traffickers are packaging and delivering illegally procured body parts to consumers in the U.S. and other wealthy nations in the form of jewelry and carvings made of ivory, fashion accessories made of exotic skins, and culinary “delicacies” from increasingly rare animals.

Major U.S. companies are as appalled as the rest of civil society at the scale of the killings, and the estimated $7 billion to $10 billion in annual ​illegal profits that are impacting our national security by financing terrorist organizations and corrupting and destabilizing governments around the world.

Bipartisan leaders in the Senate and House have joined with the Administration in recognizing that the United States is part of the problem. The National Strategy for Combatting Wildlife Trafficking, released two years ago by a cabinet-level task force, acknowledged that the U.S. is a major market for illegal wildlife products and that consumer demand in the U.S. is helping to fuel the killings. It called on the U.S. to help African nations stop poaching activities and disrupt the criminal networks that bring the illegal products to market. But the National Strategy put equal weight on the demand side of the equation, noting that “criminals will continue to kill wildlife and traffic in contraband so long as the potential profits remain so high.”

To tackle the demand issue, the National Strategy called for a coalition effort in which the government would partner with U.S. corporations and nongovernmental organizations to reduce domestic demand for illegally traded wildlife and wildlife products. The strategy challenged U.S. companies to raise awareness about the wildlife trafficking crisis, “reduce the risk of illegal products entering the supply chain” and “assure consumers that the products they purchase were obtained legally and sustainably.”

Corporate America is stepping up to help end the scourge of wildlife trafficking. Today, 16 U.S. companies are answering the call by announcing commitments to help stop trafficking activities in the United States. They are gathering under the umbrella of the U.S. Wildlife Trafficking Alliance, a coalition of companies and NGOs formed in response to the National Strategy and working in partnership with the government to stop the demand for illegal wildlife products in the U.S.

The commitments feature big name companies that are rising to the challenge. Leading the way for the fashion industry is Ralph Lauren (RL); for the e-commerce sector, eBay (EBAY), Etsy (ETSY) and Google (GOOGL); for the jewelry sector, Tiffany & Company, Signet and the Berkshire Hathaway companies, Richline and Rio Grande; for the auction industry, LiveAuctioneers.com; for the travel and hospitality sector, JetBlue, Royal Caribbean Cruises, Natural Habitat Adventures, and the Adventure Travel Trade Association. Discovery Communications is joining in the effort to educate U.S. consumers about the scourge of wildlife trafficking. So too are the Bronx Zoo and other members of the Association of Zoos and Aquariums, who will get the word out to the more than 180 million Americans who will visit our zoos and aquariums this year.

These companies are committing their brand names, supply chain expertise, marketing acumen, and communications networks to rid the U.S. of illegal wildlife trafficking. It is corporate social responsibility at its best, aligning the business community with the agencies that are responsible for catching illegal traffickers in the U.S. and the nongovernmental organizations active in this area, including Alliance members such as National Geographic, the World Wildlife Fund, the Wildlife Conservation Society, WildAid, the African Wildlife Foundation, and the International Fund for Animal Welfare, among others.

David J. Hayes is chair of the U.S. Wildlife Trafficking Alliance. He is a visiting lecturer at Stanford Law School, and the former Deputy Secretary of the U.S. Department of the Interior.