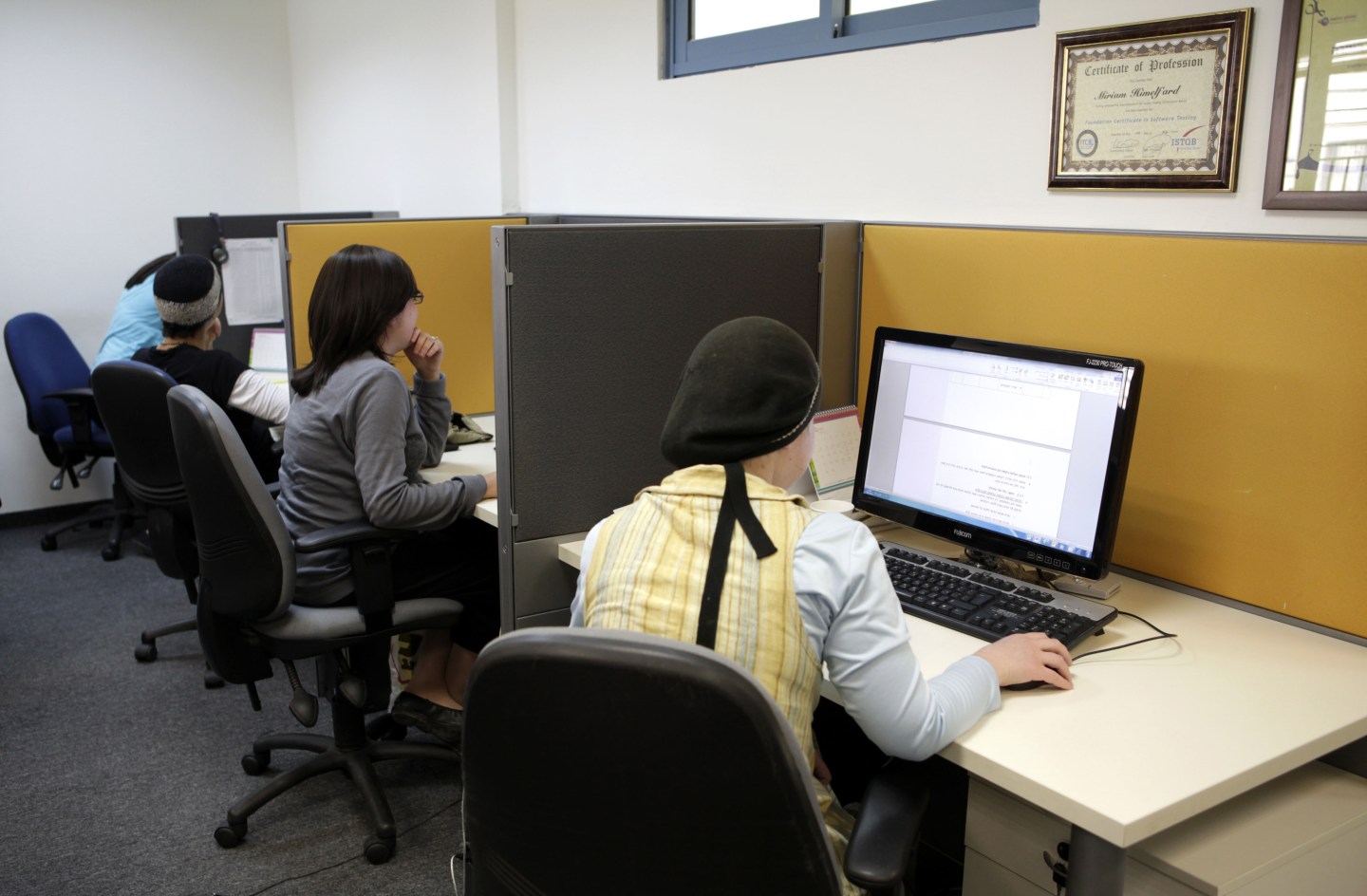 For women living in Israel’s handful of ultra-religious communities, career options are limited. Following the traditional path means marrying young and supporting large families on low-wage work as their husbands study the Torah, Judaism’s central religious text. With little connection to people outside their community and scant knowledge of the Internet—which is often restricted to all but a few sites in homes and schools—Orthodox Jewish women have traditionally worked as teachers and secretaries.

Even though Haredi (very religious) women are typically breadwinners for their families, the type of jobs available to them means that many families rely on help from the Israeli government to make ends meet. But tech companies are beginning to offer them options more lucrative than childcare and administrative work. From industry giants like Cisco and Intel (INTC) to boutique firms, Israel’s tech players are starting to offer amenities such as single-sex offices, kosher food and flexible hours that cater to stringent Haredi guidelines.

“At Cisco, we focus a lot on inclusion and collaboration and value diversity,” says Shani Ginat, human resources manager at Cisco’s Jerusalem office. The company is one of Israel’s largest employers of Haredi women and men, whom it employs in roles ranging from project management to software engineering. “Our hiring strategy is to bring variety of people from different cultures, gender and backgrounds. This way, we build more diverse teams, bring new way of thinking into the company and promote creativity and innovation,” she explains.

Cisco (CSCO) offers flexible hours, part-time positions and kosher food to cater to Haredi employees. Outside of work, the company leverages its cultural diversity through activities such as biblical club, where religious and secular employees gather to learn and discuss Torah portions together from a variety of historical, philosophical and religious points of view, Ginat says.

Integrating tradition and technology is not always smooth, however. “Sometimes I get calls from husbands upset that their wives are working with male clients,” says Nili Davidovitz, who employs about 40 Haredi women at her Tel Aviv-based software company Daat Solutions. Daat doesn’t employ men, but “they’re worried that their wives are speaking to male clients on the phone or on email or in meetings, and they tell me ‘Another man will be her boss, and then she won’t listen to me.’ I tell them, ‘No, I’m the boss.’”

Others say the tensions are more pronounced while conducting international business. “As an orthodox woman I cannot shake hands with men,” said Daphna Rosenbom, an engineering manager at Cisco Israel. “This situation is very uncomfortable [when dealing with clients from abroad] and I try to explain I’m an Orthodox woman, hoping they will understand and will not be insulted.”

Due to traditional beliefs that prize large families and eschew birth control, about 25% of Daat’s employees are pregnant or on maternity leave at any given time. The flexible, project-based nature of the work helps accommodate workers of childbearing age, who tend to give birth every year or so, says Davidovitz.

Not all companies can offer the flexibility Haredi women need to care for their families, and integrating Haredi workers can be challenging. “Most of the Haredi women have a lot of kids so long hours are difficult for them,” says Moshe Friedman, co-founder of KamaTech, a non-profit that helps place Haredi men and women at Israeli offices of established companies such as Google and Microsoft. “Most Haredi women don’t want to work in a secular environment, and secular companies don’t always have an open mind to recruit Haredi women,” he adds.

Still, KamaTech has managed to place more than 100 Haredi women in jobs at tech companies throughout Israel. “We want to create the role model and the success stories for those who are interested in this direction and pave the way for them,” Friedman said.

Ultimately, recruiting Haredi women to work in tech will expand their understanding of what they can achieve and alter the way they are viewed in their families, Davidovitz said. She recalled a conversation with a 22-year-old employee who came to her office to discuss career goals. “She was telling me what she wants for the future,” says Davidovitz. “A few months ago, she would just say ‘thank you’ to anything I’d offer.”