These 9 Republicans Say They Won’t Vote for Donald Trump, Even Against Clinton 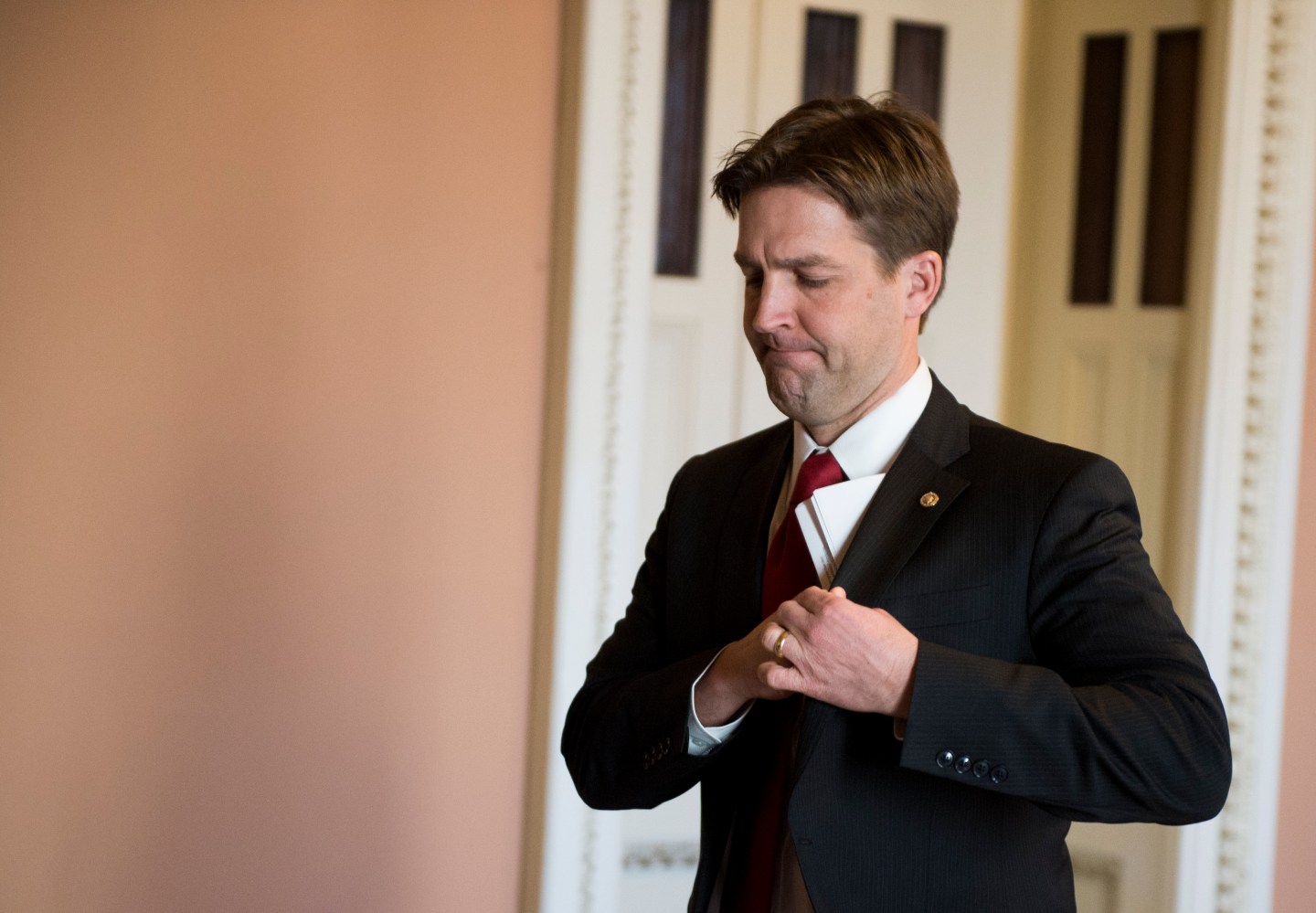 Donald Trump is likely to win big in Super Tuesday primaries, according to polls. He’s received endorsements from some prominent Republicans, including NJ Governor Chris Christie and Maine Governor Paul LePage and Alabama Senator Jeff Sessions. But among the Republican establishment, there also has been resistance to Trump, with former GOP presidential candidate Mitt Romney even declaring Trump’s stumble over support from Ku Klux Klan “disqualifying & disgusting.”

Now, a few prominent Republicans — some currently in office– are openly declaring that not only do they oppose Trump, but will not vote for him should he gain the party’s nomination. A few vow to sit out the election, while others say they will back a third party candidate — or maybe even vote for Hillary Clinton, should she become the Democratic nominee. They all cite their principles and conscience as the reason, although it likely doesn’t hurt that recent polls show either Bernie Sanders or Hillary Clinton would easily beat Trump in the general election.

So far, the heavyweights in the party — such as House Speaker Paul Ryan — have criticized Trump, but have indicated they would support him should he win the nomination. Even Texas Senator Ted Cruz, who is seeking the Republican nomination and started the hashtag #NeverTrump, says he would support Trump if he was the GOP nominee. Although even if GOP leaders did oppose Trump, it’s not clear it would make a dent in Trump’s popularity. As the Washington Post noted, it seems that the more the Republican elite oppose Trump, the more support he gets from voters.

Below are nine prominent Republicans who have stated unequivocally they will not vote for Trump. Fortune has reached out to Donald Trump’s campaign for a comment and will update this post when we get a response.

Background: Influential neoconservative who held multiple positions in the George W. Bush administration.
Statement: In tweeting his “short list” of reasons to not vote for Trump, he listed, “demagoguery, torture, bigotry, misogyny, isolationism, violence. Not the Party of Lincoln & not me.”

Short list: demagoguery, torture, bigotry, misogyny, isolationism, violence. Not the Party of Lincoln & not me. https://t.co/k7Y8A6yS3L

Background: Congressional representative from Florida’s 26th district.
Statement: “This man does things and says things that I teach my six- and three-year-olds not to say,” Curbelo told the Wall Street Journal in an interview. “I could never look them in the eye and tell them that I support someone so crass and insulting and offensive to lead the greatest nation in the world.”

Background: Communications strategist to three Republican presidential campaigns as well as one-time press secretary to former Speaker of the House John Boehner.
Statement: “For many Republicans, Trump is more than just a political choice,” Madden told the Washington Post. “It’s a litmus test for character. I’m prepared to write somebody in so that I have a clear conscience.”

Background: Former congressman from Florida and past Republican National Committee chair.
Statement: “I would not vote for Trump, clearly,” Martinez told the Wall Street Journal. “If there is any, any, any other choice, a living, breathing person with a pulse, I would be there.”

Background:Representative of Virginia’s 2nd Congressional District.
Statement:”Trump is a bully, unworthy of our nomination,” Rigell wrote in an email, published by the website Hot Air. “My love for our country eclipses my loyalty to our party, and to live with a clear conscience I will not support a nominee so lacking in the judgment, temperament and character needed to be our nation’s commander-in-chief. Accordingly, if left with no alternative, I will not support Trump in the general election should he become our Republican nominee.”

Background: Republican Senator from Nebraska
Statement: “A presidential candidate who boasts about what he’ll do during his ‘reign’ and refuses to condemn the KKK cannot lead a conservative movement in America,” Sasse wrote on his Facebook account. On Twitter he said, “If Trump becomes the Republican nominee my expectation is that I’ll look for some 3rd candidate – a conservative option, a Constitutionalist.”

If Trump becomes the Republican nominee my expectation is that I'll look for some 3rd candidate – a conservative option, a Constitutionalist

Background: Former Oklahoma representative
Statement: Watts told the Wall Street Journal that he would write in a candidate before voting for Trump. “It’s going to be a tremendous setback for the party if he wins,” he said.

Background: Served in the administrations of Ronald Reagan, George H.W. Bush, and George W. Bush as a speechwriter and advisor.
Statement: “Mr. Trump’s virulent combination of ignorance, emotional instability, demagogy, solipsism and vindictiveness would do more than result in a failed presidency; it could very well lead to national catastrophe,” he wrote in the New York Times. “The prospect of Donald Trump as commander in chief should send a chill down the spine of every American.”

Background: Former governor of New Jersey
Statement: “No, I won’t. I can’t,” Whitman said on Bloomberg Politics when asked if she would support Trump should he be nominated. “The kind of rhetoric in which he is engaged, the divisiveness he is encouraging, the belittling of people just by reason of their ethnicity, he is creating a divide in this country that I think is very dangerous for the future and while I certainly don’t want four more years of another Clinton administration or more years of the Obama administration, I would take that over the kind of damage that I think that Donald Trump could do to this country, to its reputation, to the people of this country.”