These 10 Photos Will Make You Rethink Your Trip to Cuba 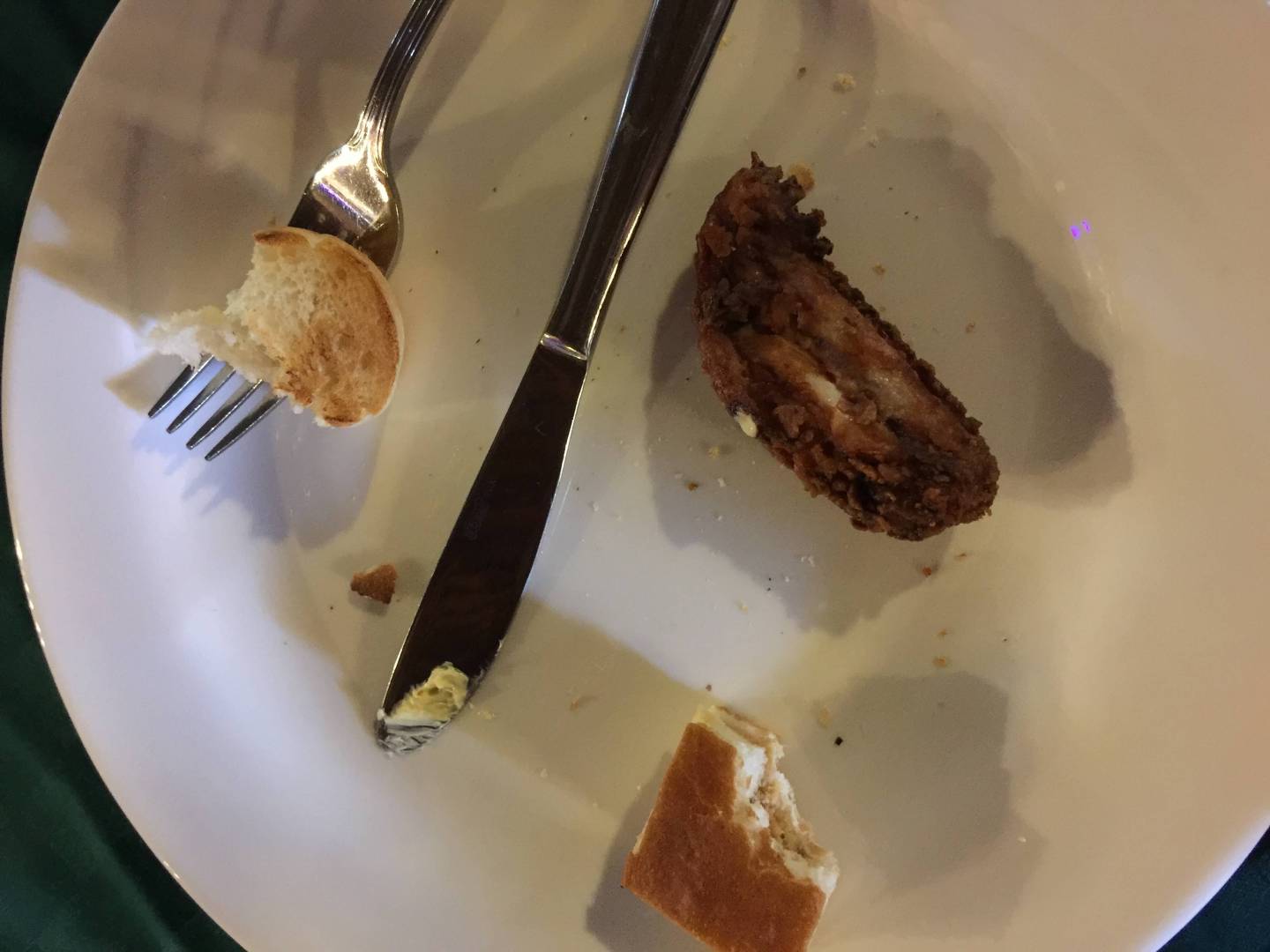 Photograph by Anne Vandermey for Fortune

I recently got back from a 10-day trip to Cuba. And during those days I gained some insight into what thousands of Americans are going to find when they leave their luxury hotels and lavish supermarkets and spend significant amounts of money to travel to an island hobbled by embargo and food shortages. In a nutshell, it’s going to be a huge, huge mess. But (probably!) worth it, particularly for the adventurous and culinarily unambitious.

The trip I went on was a “people-to-people” educational group voyage, in compliance with U.S. State Department guidelines. I like to think of it as the last government trip to Cuba, before normalized tourism takes hold. The group spent most of its time in Havana, but we also visited Viñales in the west and Trinidad on the Caribbean coast. Cuba is a fascinating and outrageously photogenic place. Here’s what I saw.

The food is bad, but the plumbing is worse

Part of traveling is pretending that the food everywhere you go is some of the best in the world. But not everywhere can be above average on the culinary front. Mince pie and fermented shark are indigenous to somewhere, after all.

Cuban cuisine is based on imported rice, black beans, government issue cheese product #1 and enough sugar to give you diabetes in a week. It tastes about as good as it sounds.

I’m not blaming Cuba for this. The country is desperately poor, the embargo means nothing is quite fresh, and restaurants have only been legal since 2013. That’s hardly enough time to make a proper sauce, let alone develop a restaurant scene.

But that doesn’t stop travel writers from pretending the food is good. The most recent example of this was The New York Times’ 36 Hours in Havana piece, which fawned over all of the “hot” new restaurants in city. The article came out while I was there, so I made a point of going to as many restaurants as I could in search of a decent meal. They were perfectly lovely restaurants with attentive service, hip decor and food that would make a Red Lobster manager blush.

The one upshot to Cuban food is you don’t find yourself overeating, which is good since properly functioning flush toilets are almost unheard of.

Labor is free and capital is dear

Eighty percent of Cuba’s workforce is employed directly by the state. For them, the official wage is 500 Cuban pesos per month — or about $20. Professionals in sectors facing an acute labor shortage make a bit more: doctors earn three times the standard wage. But however you slice it, the average salary is extremely low relative other countries in the hemisphere.

Sure, there’s a big safety net: the government provides free housing, healthcare, and education. The ration book provides for about 15 days of food per month, as well as staples like soap and cooking oil. (beyond that, food is subsidized.) So we’re not exactly talking about World Bank $1.25 a day levels of poverty, but buying power in the country is limited. And to make matters worse, anything that can’t be produced on the island needs to be imported, often via the black market thanks to the embargo, leading to higher than average prices for clothes, electronics, building materials, and the vast majority of consumer goods. Internet access is $2 per hour, texts 5 cents per message.

The high cost of goods and low cost of work lead to labor practices that would seem insane anywhere else. Jobs like plowing fields and weaving textiles that have been mechanized for decades in the rest of the world are done by hand in Cuba — sometimes by people with college degrees. Productivity is handicapped because employers (read: the state) are also short on cash. Cuba imports all its energy and most of its food, leaving very little to put towards machines that might improve efficiency. Cuba’s “modern” infrastructure and equipment dates from the end of the Soviet Era, and much of it from before the revolution (see: classic cars).

The result is a country where a full-time employee might cost $100 a month in the embryonic private sector, but a five-year old Kia runs $100,000.

Old cars were kind of terrible

The reason we don’t drive 55 Chevys around America anymore is that they were terrible cars. On every measure aside from sheer bulk, classic cars were drastically worse than what we drive today. They were slow; got terrible fuel economy, and were almost-certain-deathtraps in any sort of accident. Perhaps worst of all: they lack catalytic converters. Only 5% of Cubans own private cars, and a not all of those are 55’ Chevrolets. But even the small number of old cars tooling around Havana’s empty highways spew so much particulate that the air in New York’s Times Square seems fresh and clean by comparison.

Cuban agriculture is 100% organic and a total catastrophe

In college, I took a course about Cuban agricultural systems that in retrospect was nothing more than an excuse to get around hyper-strict Bush-era travel bans. I didn’t go on the Cuba trip then (it involved mandatory farm work), but I remember the thesis quite clearly: It was that Cuba shows how a whole country can be not only GMO free, but also free of pesticides and fertilizer. Michael Pollan’s wet dream.

If Cuba is the example, we’re all going to starve.

While it’s true that all the food produced in Cuba is totally organic, the agricultural system is a complete shambles. Nobody can afford a tractor, let alone fertilizer or pesticides. The revolution capped farms at 40 acres making them too small to effectively mechanize even if you could afford machines. People pick insects off tobacco leaves by hand and plow fields with donkeys. Some 14% of the country is stuck working in agriculture, which contributes just 4% of GDP and doesn’t produce nearly enough to feed everyone. More than 80% of food has to be imported.

All of the buildings are falling down

One of the most striking things about Communist Cuba is how little communist architecture there is. There is the revolutionary square — a vast parking lot with a scattering of dumpy post war buildings around it. But aside from that, most of the built environment dates from a several decade timespan around the turn of the 19th century. There are very few of the concrete apartment blocks that blanket Eastern Europe.

It makes for a lovely old-world feel on the surface, but the problem with a building stock that’s over 100 years old and hasn’t seen a drop of paint since 1989 is that buildings are starting to fall apart — everywhere, and at the same time.

According to one government architect, Havana sees four buildings collapse per-day. Apartments are privately owned (sales are restricted and only became legal at all in the past few years), but ownership of the buildings is ambiguous. A gallon of paint costs a month’s salary. Don’t even think about new appliances. The parts of the old city that haven’t already fallen down look as though they soon might.

One sliver of hope is the recent relaxation of remittance rules by the Obama administration. Some buildings are being renovated — which could suggest the owners have relatives in Miami.

When nearly every job pays 500 Cuban pesos ($20) a month, it’s really hard to get people to fill jobs that are grueling or require years of training. The result is labor shortages and weird labor distribution, a problem exacerbated by two factors:

There’s no racism and Cuba’s a democracy, technically

I’m not sure if it’s the repressive government or the lack of Internet access, but a lot of Cubans come across as a particularly by-the-book, party-line lot. We were told by several different people that despite a history of slave plantations, racism wasn’t an issue at all in Cuba. The Revolution technically abolished it in 1959! How glorious. Why didn’t we try that, comrade?

We heard similar double speak about elections and press freedom. If there’s an election commission, the elections must be free and fair. The law says so!

Everyone in Cuba desperately wants the embargo lifted

As a tool of regime change, the American trade embargo has been a complete failure. The Castro government is now the longest serving in the world. But as an exercise in immiserating a small country, it has been a smashing success. Turns out that locking 11.5 million people out of the world economy does, in fact, result in radically higher prices, crumbling infrastructure and widespread human suffering.

Let’s not pretend the embargo is some great principled position. We count the Saudis among our closest allies and we resumed trade with China — an opening that has helped lift 500 million people out of poverty (while benefiting western consumers too!). The difference between China and Cuba is the Guomindang fled to Taiwan when they lost the revolution. Batista supporters went to Miami, where they have been enormously successful at advancing grudge politics against the revolutionaries ever since.

Cuba relations are something of a historical curiosity for most Americans, but for Cubans they are the only thing that matters. Almost everyone you encountered — save for the employees at the Hotel Nacional de Cuba, who set the global standard for surly hotel staff — were genuinely excited to find out we were Americans. People would assume we were Canadian, we’d correct them, and their face would light up with joy. Cab drivers would give us a high five. Street merchants would beam and ask how we liked Cuba. It’s not just that Americans tip better than our neighbors to the north, but that our presence means the embargo might end soon.

Unfortunately, I doubt it will.

And they think your concern about McDonald’s is patronizing nonsense

The Cuban culture that we romanticize today developed during a period when the country was utterly and completely dominated by American companies. The idea that the arrival of McDonald’s will somehow suffocate a culture that survived United Fruit, the Batista regime, the mafia, and a communist command economy strains credulity, to say the least. Some of the state officials we talked to found the idea patronizing.

Cuba has more than enough crumbling commercial real estate to go around and the Cuban people seem to desperately want access to the same goods and services everyone else in the world enjoys. I personally find dilapidated buildings and ration centers photogenic, but pretty much everyone would be better off with a McDonald’s there instead. Plus, Cuban breakfast could really benefit from the introduction of the McMuffin.

Most of the embargo is rigorously enforced, but some aspects are total bullshit

Thanks to Cuban Expat Lobby, the U.S. embargo of Cuba has been more ruthlessly enforced than any other trade sanctions we’ve imposed, but even so, the part about air travel seems to be kind of bullshit. American air carriers aren’t allowed to fly to Cuba — you have to take a special charter from one of a handful of approved cities.

Wally Nowinski is the director of e-commerce at custom photo printing company, Collage.com.