‘Friends’ Reunion: How the TV Show Made Them Stars and Insanely Rich 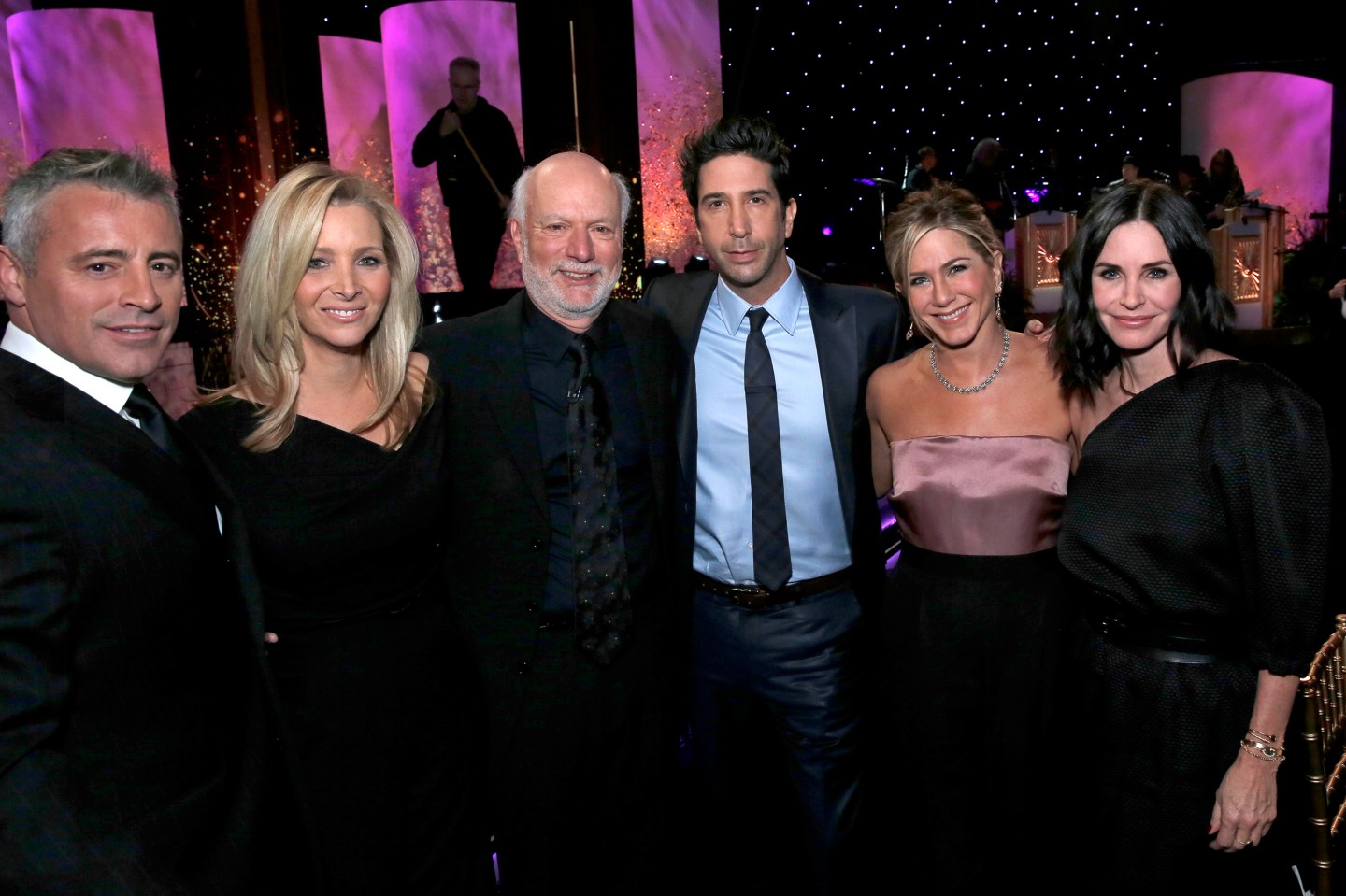 Turn off your phone, ignore the doorbell and clear your social calendar. On Sunday, the cast of the beloved NBC sitcom “Friends” will reunite.

Before you get too excited, it’s just a reunion, not a new episode of the show. The occasion is “An All Star Tribute To James Burrows,” a two-hour NBC special celebrating the director of some of television’s most iconic sitcoms, including “The Mary Tyler Moore Show,” “Cheers” and, of course, “Friends.”

The cast members have been asked about a reunion ever since the show went off the air 12 years ago, and until now, every rumor of the show’s return remained a rumor. But this reunion is for real, and the fact that it’s the recipient of such anticipation is a testament to its enduring popularity and its place in pop culture.

If you can’t see what the fuss is all about, allow us to break it down for you. In the 10 seasons in which “Friends” aired, it consistently ranked in the top 10 of the final season ratings, even in its first season. Its popularity never waned, right up to the final episode, which pulled in an astronomical 52.5 million viewers.

In syndication, “Friends” continues to attract the same huge audiences that it did when it was hot off the presses. According to USA Today, Warner Bros. earns $1 billion annually in syndication revenue.

“Friends” went through a very messy public dispute over money and survived it unscathed. The cast demanded both salary increases and a percentage of profits from syndication, and threatened to walk if their demands weren’t met. Every cast member stayed with the show and saw their salaries increase every year until each was earning $1 million per episode.

Indeed, the show was so beloved that even a public salary brawl couldn’t diminish audiences’ fondness for it. And to say that it was worth it for the cast would be an understatement — since they receive 2% of the show’s syndication income, every member of the core cast makes approximately $20 million a year, even if they spend that whole year doing absolutely nothing but sleeping until noon and sitting on the couch in a bathrobe, eating donuts and playing “Fallout 4.”

Now that the cast is reuniting after more than a decade, we thought it was time to look at what the people associated with the show have been doing ever since it went off the air.

Jennifer Aniston portrayed Rachel Green, who moved to New York City and somehow supported herself on a coffee shop waitress’ salary. Aniston was the breakout star of the show, and at the height of its popularity, a stroll down the streets of any major city yielded the sight of female after female sporting the haircut known as “The Rachel,” so named for the ‘do the actress wore.

Aniston has had a successful career since “Friends” went off the air. She starred in such films as “The Break-Up” and “Horrible Bosses,” and she has also launched three fragrances, helpfully named “Jennifer Aniston,” “J by Jennifer Aniston” and “Near Dusk by Jennifer Aniston.” According to a 2014 analysis by the Hollywood Reporter, she made $15 million from her film roles in one year– but more than that from her deals as a pitchwoman for Smartwater and Aveeno, a skincare line. In 2015, she signed a deal worth $5 million to represent the Dubai-based airline Emirates. All in all, she’s come a long way since starring in the 1993 horror movie “Leprechaun.”

Before “Friends,” Courteney Cox had received a fair amount of public exposure thanks to her appearance as the woman dancing onstage with Bruce Springsteen at the end of his “Dancing in the Dark” music video. However, but for her appearance in the 1987 Dolph Lundgren movie “Masters of the Universe,” her career was going nowhere until the role of Monica Geller on “Friends” became hers.

Post-“Friends,” Cox stayed in the sitcom game with her series “Cougar Town,” which aired from 2009 through 2015 and focused on the comedic foibles of a divorced woman in her 40s. While it never garnered ratings anything near those of “Friends,” it did a respectable job, at one point pulling in over 11 million viewers.

One of two executive producers on “Friends,” David Crane is also known for his work on two other sitcoms – “Dream On,” which ran successfully on HBO for six years, and the Kirstie Alley vehicle “Veronica’s Closet,” which aired on NBC from 1997 until 2000. Crane served as co-creator of both shows.

Since “Friends,” Crane was involved in two further shows, with varying degrees of success. In 2006, he was the creator, writer and executive producer of “The Class,” a CBS sitcom than ran for only one season, and “Episodes,” on which he served as writer and producer. It premiered on Showtime in 2011 and reunited Crane with fellow “Friends” alumnus Matt LeBlanc, and has been picked up by Showtime for a fifth season.

David Crane’s partner as executive producer was Marta Kauffman. She had worked alongside Crane on “Dream On” and was there with him as well for “Veronica’s Closet,” but she had done plenty of solitary toiling beforehand, most notably as a writer on the 1987 CBS sitcom “Everything’s Relative,” which starred a pre-“Seinfeld” Jason Alexander. It was cancelled after one season.

After “Friends,” Kauffman and “Sex and the City” writer Liz Tuccillo worked on “Related,” a 2005 sitcom on The WB that was cancelled after one season. In 2015 she hit pay dirt as the co-creator of “Grace and Frankie,” a well-received Netflix (NFLX) original comedy series starring Lily Tomlin and Jane Fonda. It was renewed for two additional seasons.

Lisa Kudrow portrayed Phoebe Buffay, masseuse and aspiring folk singer, whose musical talents were best exemplified by the original composition “Smelly Cat.” Kudrow managed better than many of her co-stars to remain consistently employed outside of the show, starring in such well-received movies as “Romy and Michele’s High School Reunion,” “Analyze This” and “Wonderland.”

After “Friends,” Kudrow produced, wrote and starred in the 2005 HBO series “The Comeback,” which was cancelled after one season. This decision with met with such an outcry that HBO revived it for a second season in 2014 and has renewed it for a third. In 2015, Taylor Swift performed “Smelly Cat” in Los Angeles on her 1989 World Tour, and Kudrow joined her onstage for the performance.

Joey Tribbiani was the not-particularly-bright character on “Friends” portrayed by Matt LeBlanc. The struggling actor was roommates with his best friend, Chandler Bing, and what he lacked in smarts, he made up for with his kind nature, the sort that would cause one to lightly punch him on the bicep and refer to him as “you big lug.”

Since “Friends,” LeBlanc mostly stayed with television work. He starred in “Joey,” the only “Friends” spin-off, which was cancelled by NBC in its second season due to low ratings. LeBlanc went on to star in “Episodes” on Showtime in 2011 and in May, he will begin his duties as a presenter on the British automotive show “Top Gear.”

Matthew Perry played Chandler Bing, Joey Tribbiani’s roommate and sometime boyfriend of Janice, a recurring character with a nails-on-the-chalkboard voice that could shred eardrums at 500 paces. Perry entered rehab in 1997 and 2001 for addiction to alcohol and opiates, a fact reported ad nauseam by every supermarket tabloid in the United States.

Perry has worked consistently in both movies and television since “Friends” went off the air, and even reunited with Courteney Cox for a 2014 episode of “Cougar Town.” However, he broke hearts with the news that he would be the sole “Friends” cast member not in attendance during the upcoming reunion, as he would be busy rehearsing for a play in London instead. Luckily, he has provided a pre-taped segment that will be played on Sunday night, so that it can be described as a full reunion when discussed in purely technical terms.

Any “where are they now” piece about “Friends” that fails to account for the whereabouts of The Rembrandts would be derelict in its duties. The Rembrandts are the band who performed the theme song, “I’ll Be There For You,” and it’s probably been playing in the back of your head the entire time you’ve been reading this.

Formed by Danny Wilde and Phil Solem in 1989, The Rembrandts were a hard-working alternative rock band for years before the song came along and changed everything. Wilde told The Independent in 2004 that the changes weren’t necessarily for the better.

“Before ‘Friends’ we’d been playing all these underground venues,” he said. “But ‘I’ll Be There’ was so huge that we ended up playing stadiums almost overnight. We’d do these matinee shows and see 10-year-old kids in the crowd, singing along. When we were interviewed we were always asked how many claps there were in the song. I think we lost a lot of our original fans at that point, and many people stopped taking us seriously.”

Wilde and Solem split up in 1997 but reunited three years later, and today the band is still together. According to their website, they plan to release a new album, “Via Satellite,” this year.

As Ross Geller, David Schwimmer played one half of Ross and Rachel, the on-again-off-again couple whose exploits served as fodder for many a “Friends” storyline. While their onscreen relationship had its ups and downs, his character remained unfailingly goofy.

Schwimmer has had a successful career in films and television since “Friends” went off the air. He provided voice work for three of the very successful “Madagascar” animated films, and on the small screen he’s appeared on “30 Rock” and “Entourage.” He can currently be seen playing defense attorney Robert Kardashian on “American Crime Story” The People v. O.J. Simpson,” a miniseries on the FX network.

Tom Selleck was already an established star when he began appearing on “Friends” as Richard Burke, the “December” portion of the May-December romance between himself and Monica Geller. In 1980, he had begun appearing on American television sets as Thomas Magnum on “Magnum, P.I.,” and it ran until 1988, ranking in the top twenty shows every year for the first five years it was on the air.
Since leaving “Friends” and taking his virile ‘stache with him, Selleck has kept busy doing exactly what he was doing before “Friends” – working in movies and television. His current gig is on the CBS police drama “Blue Bloods,” where he portrays NYPD commissioner Frank Reagan. The show is currently in its sixth season and shows no signs of slowing down anytime soon, and neither does he.