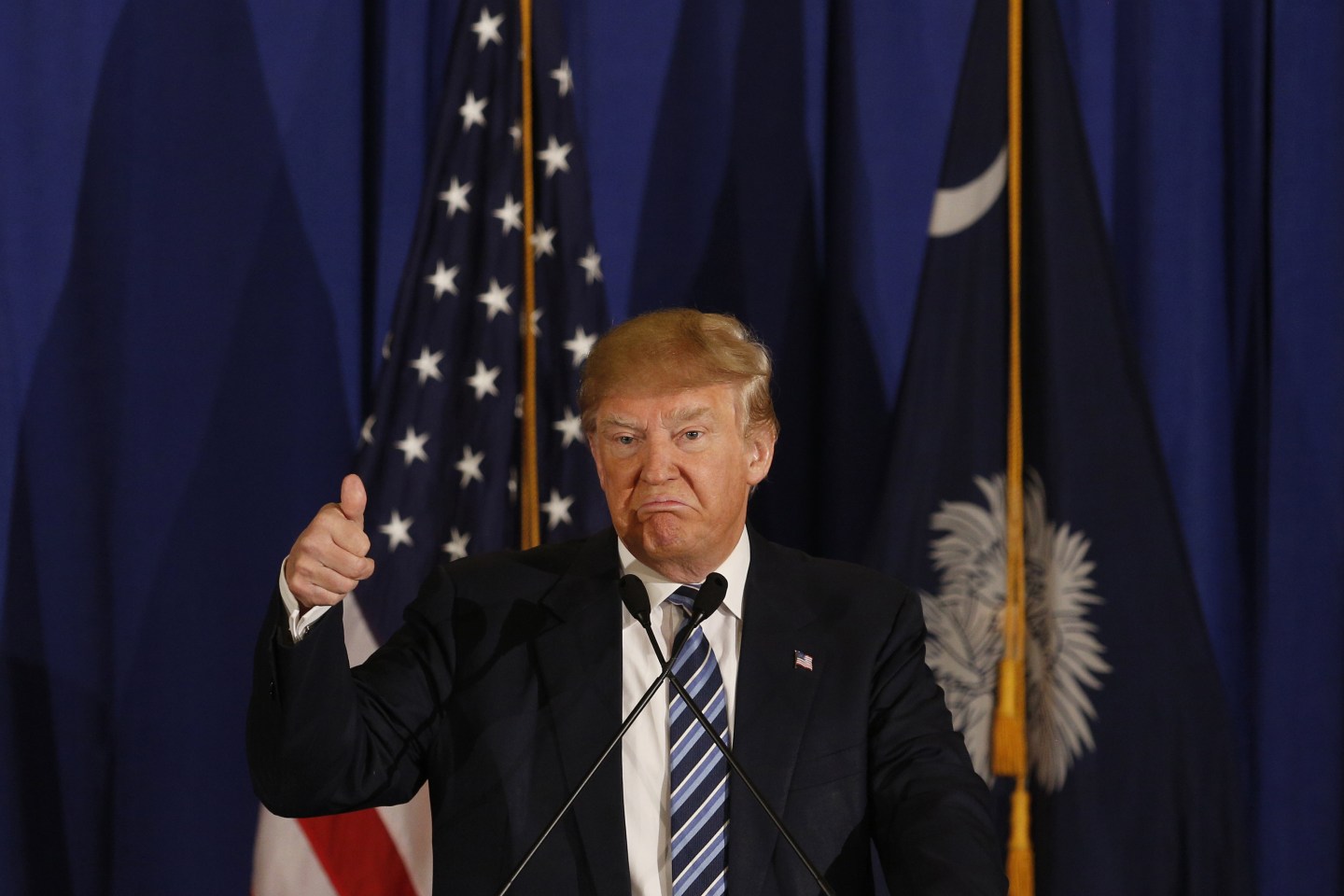 The week leading up to the South Carolina Republican primary tends bring fascinating if unseemly twists, from allegations of out-of-wedlock children to spouses’ sexual histories. But the state seemed determined this week to host a contest that would set a new bar on just how bizarre and nasty American politics can become.

Voters listened as robocalls in Spanish suggested Cuban-American Rubio was advocating for, as the ad said in exaggerated form, “amnestia” and “illegalmente” immigration. Ted Cruz’s campaign photoshopped Rubio and President Barack Obama into the same stock photo image. Ben Carson’s campaign ran an ad saying he was “raised in the ghettos of Detroit” and another that attacked Democrat Bernie Sanders with the statistic that most murders last year were committed by blacks. Donald Trump found himself calling the Pope “disgraceful.” The hard-nosed Ohio Gov. John Kasich continued a campaign built around the idea of more hugs and a slower pace to life. Then Jeb Bush tweeted a photo of a handgun engraved with his name, captioned simply “America.”

America, indeed. This is how we pick presidential nominees, one unbelievable development after another. The state with the worst reputation for political mudslinging outdid itself. The return of former President George W. Bush—who in 2009 left office considered politically toxic—was almost a footnote as the candidates questioned each other’s citizenship, faith and motives. And the nuttiest week of the White House race yet won’t end until the polls close at 7 p.m. Saturday night. Whatever the outcome, the race has already defied historical precedent, with a thrice-married, adulterous New York billionaire sitting atop Republican polls in this religion-forward state. South Carolina was prime evidence that the nation’s political ground is shifting underfoot.

Take the Spanish-language call to South Carolina voters. Rubio’s campaign said Cruz’s campaign “has now gone bilingual with their false dirty tricks,” while Cruz’s campaign said it had nothing to do with the calls. There aren’t many Spanish-speaking Republican voters in South Carolina, so the intended effect was simply to have a non-English message on the other end of the line, repeatedly emphasizing the words “Rubio” and “amnestia.”

Cruz’s campaign did not deny that it had photoshopped Rubio and Obama together on a website. Rubio senior adviser Todd Harris handed out the image to reporters to as he sought to brand Cruz as “deceitful.” (It was a message other candidates echoed.) The Cruz campaign earlier in the month wrongly suggested to voters in Iowa that Ben Carson was dropping out of the race just hours before the caucuses, and his rivals have been building that storyline to hurt his brand. One Cruz campaign adviser, former Rep. Jack Kingston, insisted his friend misrepresented nothing. He’s a Christian, after all, and such shadiness wouldn’t fit with his faith. Even so, Kingston noted the knives are out. “This is probably the toughest primary that I’ve ever seen,” Kingston told reporters. “Elbows are sharp here.”

At the same time, Trump and Pope Francis were sparring over the billionaire’s plans to build a huge wall along the U.S.-Mexican border. Asked about Trump aboard the papal plane returning from trip to Mexico, the pontiff said, “A person who thinks only about building walls, wherever they may be, and not building bridges, is not Christian. This is not in the Gospel.”

Trump, as is his habit, responded by hitting back harder. In signature bluster, he claimed ISIS was gunning for the Vatican, and only a President Trump could protect the seat of the Holy Roman Church. He also said the Pope’s criticism of his faith was “disgraceful” and that Mexican leaders were “using the Pope as a pawn and they should be ashamed of themselves for doing so.” His supporters then cast Trump as the victim of a Latin-American socialist who is meddling in American politics. Only in 2016 could Trump be considered the victim of the Holy Father’s bullying.

On a separate front, Trump held press conferences to threaten Cruz. If Cruz didn’t stop running ads quoting Trump’s abandoned anti-conservative positions, then Trump would file a lawsuit seeking to have the Canadian-born Cruz declared unfit for office. Cruz, for his part, held a press conference of his own—complete with props—to tell Trump to put up or shut up, and teased that he’d gleefully depose Trump himself.

Carson, the lone African American in the contest, sought to simultaneously calm South Carolina’s concerns about his race and rail against affirmative action in ads running on Christian and talk radio in the state. A separate Carson ad declared, “FBI crime statistics show 52 percent of murders were committed by African Americans last year,” even though the FBI has not yet released homicide statistics for all of 2015. (The latest full-year statistics for 2014, found that 47% of murders tracked by the FBI with racial information were committed by blacks.) Carson’s point was apparently that he was best positioned to stop murders committed by blacks. “Only one candidate knows first-hand what it takes to overcome poverty and racial violence: Dr. Ben Carson,” the spot continued.

Kasich, who can at times be prickly and profane, seemed to find a comfort zone by wrapping himself in the blanket of optimism and inclusion. At an event in Clemson, a young man who had recently faced a series of tragedies tearfully explained that he had driven from Georgia to see Kasich, and asked for a hug. “As I have been out here, this is not unusual,” Kasich explained, after embracing the man. “I’ve heard about the pain of people all across this country.” Kasich is already looking past South Carolina and won’t be here on Saturday as results start coming in.

Then there was the Bush clan, which has few reasons to be optimistic after spending millions of dollars to remain stuck in neutral, polling at just 4% in national polls this week. The son of one President and brother to another wanted to win—or lose—the election based on his own merits, campaigning as “Jeb!.” But as the voting got closer, he enlisted his mother to help in New Hampshire, and his brother joined him in South Carolina. The once-exiled ex-President brought out the best competitive nature in Jeb Bush, but it also highlighted his relative shortcomings. Then, the next day, the buttoned-up elite boarding school alumnus was sending pictures of guns out on Twitter as though they represented the ideals of America more than anything else. The New York Daily News ran a front page mocking the wannabe 45th President: “Dolt .45.”

At one point, Bush seemed to throw his hands up and walk away. “It’s all decided, we don’t have to go vote I guess, it’s all finished,” Bush said with signature sarcasm. “I should stop campaigning maybe, huh? It’s all done. That’s not how democracy works.” The campaign clearly has been grating on him. Meanwhile, his aides warned of “dirty tricks” in the state to be allegedly perpetrated by the Rubio campaign. They went into damage control mode denying their campaign was out of money, blaming the rumor on Rubio—whose campaign, of course, denied it.

It was mudslinging at its most intense yet of this campaign, and campaign aides and advisers were groaning at what might lie ahead. Imagine how South Carolina voters feel. South Carolina Gov. Nikki Haley acknowledged how in-the-muck this campaign has become. “I wear heels, and it’s not for a fashion statement,” she said, calling politics “a bloodsport here.” “It’s because you gotta’ be prepared to kick at any time.”