9 Ways Love Is Celebrated Around the World 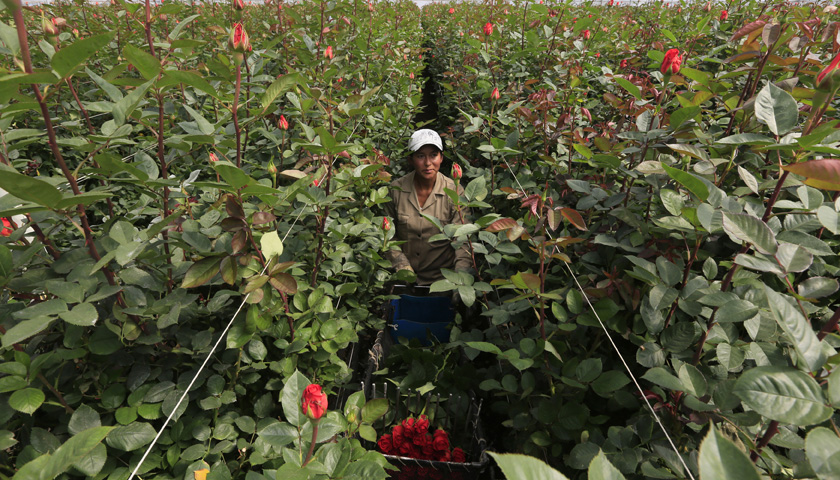 A Colombian flower grower picks up roses ahead of Valentine's Day in Facatativa, January 29, 2015. Colombia is the world's second-largest flower exporter behind the Netherlands. The Andean country exports around 500 million flowers to the U.S. for Valentine's Day, according to the Colombia Flower Growers Association. Picture taken January 29, 2015. REUTERS/Jose Miguel Gomez (COLOMBIA - Tags: SOCIETY BUSINESS) - RTR4P74J
Photograph by Jose Gomez — Reuters

The exact origin of American Valentine’s Day is unknown, but what we do know is that the holiday is related to one of at least three Saint Valentines. Which Saint Valentine, however, is the part that remains murky. One legend recounts that Valentine was a priest in the Roman Empire around AD 268 who continued to perform marriages after they was outlawed by Emperor Claudius II, who thought single men made better soldiers. Claudius ordered that Valentine be killed when he learned of the priest’s defiance.

Since it first began being celebrated in the U.S. in the 1700s, Valentine’s Day has turned into a celebration of love and romance. Couples exchange gifts, cards, and flowers, and a nice dinner out on the town is frequently the norm.

While Valentine’s Day is mainly an American holiday, love is commemorated around the global with local holidays and rituals. Here’s how nine countries celebrate love and friendship.

The Morozoff confectionary and cake company is credited with bringing the western holiday to Japan when it placed a Valentine’s Day ad in 1936. The holiday finally took off in the 1970s, but with a twist: In Japan, it is a day for women to give chocolates to the men in their lives, not vice versa. A lot of thought goes into the right amount to give each man, and whether it should be cheap giri choko (“obligation chocolate”) given to co-workers and classmates, or the nicer honmei choko (“true feeling chocolate”) presented to one’s object of affection. Japanese women finally saw payback with the rise of “White Day” in the 1980s. Exactly one month after Valentine’s Day, on March 14, men reciprocate with white chocolates or other small gifts.

South Korea celebrates Valentine’s Day like Japan, but more so. On Feb. 14, women give men chocolates and then the men reciprocate a month later. But things get more interesting—or sad, depending on your perspective—on April 14. That’s “Black Day,” when those who were left out of the February and March festivities go out for a dish of jajagmyeon, or black bean-paste noodles. Still, singles have plenty of other opportunities to make up for missed romance. The 14th of every month is a love-related holiday in South Korea: Candle Day, Valentine’s Day, White Day, Black Day, Rose Day, Kiss Day, Silver Day, Green Day, Music Day, Wine Day, Movie Day, and Hug Day.

A woman carries flowers to be packed ahead of Valentine’s Day at The Elite Flowers farm, a company in Facatativa, Colombia.Photograph by Guillermo Legaria — AFP via Getty Images

On Sept. 20, Colombians celebrate Love and Friendship Day (Dia de Amor y Amistad), which is essentially an equivalent to Valentine’s Day. But Love and Friendship Day is less romantic and more about friendship. Groups of friends typically get together for dinner or drinks and games of “secret friend,” similar to “secret Santa,” are commonplace. Think of this day as more like a “Galentine’s Day” (thanks, Parks and Recreation).

The country established Love and Friendship Day in 1969 to boost the economy since there were no established holidays in September.

People look at books in a stand at Las Ramblas street during traditional Sant Jordi’s day celebrations in Barcelona.Photograph by Albert Gea — Reuters

Barcelonians take the celebration of World Book Day very seriously, evening adding a romantic element to the holiday. On April 23, Catalonians celebrate Sant Jordi day, when men receive the gift of books and women the gift of roses. So people can more easily find gifts for their friends and loved ones–and spur the local economy–book and flower stalls are set up around the city.

The Government Palace is also open to visitors on Sant Jordi Day, which many tourists and local Barcelonians take advantage of. Many also attend Mass to celebrate the feast of the region’s patron saint and attend the blessing of the roses in the Gothic courtyard of the Palace.

The origin of Sant Jordi Day is twofold. April 23 is the feast day of Catalonia’s patron saint, Jordi, but the tradition is also based on folklore. Legend holds that Saint George killed a dragon that was terrorizing the city of Silene by eating its sheep and eventually its citizens. After the king’s daughter was chosen as a sacrifice to appease the beast, Saint George slayed the dragon and saved the land and its princess.

Willie Daly, one of Ireland’s last traditional matchmakers, and some of his horses in a field close to his farmhouse in Ennistymon, Ireland.Photograph by Paulo Nunes dos Santos — The New York Times/Redux

The town of Lisdoonvarna in Ireland has a rich tradition of matchmaking. The town is known for its mineral spas, which people have been flocking to since the 1800s; it became common to meet one’s match while visiting the spas.

Locals began pursuing the vocation of matchmaking, working with bachelors to find them a wife. Today, the only true matchmaker left is Willie Daly. He still lives next to the 300-year-old cottage where he was born in the 1940s (his exact birthdate is unknown) and he keeps a book of profiles. People seek out his assistance, particularly during September’s matchmaking festival, in the hopes that he will find their match. The weeks-long matchmaking festival, the largest singles event in Europe, includes daily dance parties and exhibitions of traditional Irish culture.

Russian President Vladimir Putin attends a wreath-laying ceremony to mark the Defender of the Fatherland Day.Photograph by RIA Novosti — Reuters

In Russia, International Women’s Day on March 8 is celebrated with gifts to the special women in one’s life–mothers, sisters, wives, grandmothers, aunts, girlfriends, etc.–from men in their familial and romantic relationships. The gifts are typically flowers, chocolates, and smaller tokens, or a dinner out on the town.

On Feb. 23, men are celebrated on Defender of the Fatherland Day. As they are celebrated on International Women’s Day, women give little gifts to fathers, brothers, boyfriends, nephews, grandfathers, and other special men in their lives. The day’s origin is rooted in the creation of the Soviet Army on Feb. 23, 1918. Since then, this day also celebrates the men who have fought or will one day fight to defend their country. In 2002, Putin declared it an official public holiday.

Over 4,000 couples participated in the mass wedding sponsored by the Home Development Mutual Fund (HDMF) in Manila on Valentine’s Day 2014.Photograph by George Calvelo–AP

People in the Philippines take Valentine’s Day to its natural conclusion…and then some. In recent years mass wedding celebrations have become hugely popular. More than 1,500 couples, all dressed in white, were married in a free ceremony in the Manila suburb of Caloocan City, in 2010. Three years later, the country saw about 4,000 couples married in Valentine’s Day mass weddings. The Philippines also indulges in another, shorter-term celebration of the day of love: kissing. On Valentine’s Day 2004, 5,122 couples in Manila broke the world record for the number of couples to simultaneously kiss for 10 seconds; they took the record from Santiago, Chile.

View of Copenhagen, old houses at a canal in Copenhagen, Denmark.Photograph by Thomas Koehler — Photothek via Getty Images

It’s pretty common the world over to give flowers for Valentine’s Day; in Denmark it’s customary to send loved ones little white flowers called ‘snowdrops.’ But the Danish also have the tradition of gaekkebrev (basically, “joke letters”). A gaekkebrev is a funny poem or love letter written on a piece of paper that’s been cut with an intricate pattern. At the bottom of the letter, the sender puts little dots, one for each letter of his or her name. If the recipient guesses the sender’s identity, the sender owes the recipient an Easter egg on Easter Sunday. If they can’t figure it out within three guesses, the sender is owed the egg.

View of PretoriaPhotograph by Ute Grabowsky — Photothek via Getty Images

One Valentine’s Day in South Africa, women wear their hearts on their sleeves, quite literally. The practice is said to come from an ancient Roman festival called Lupercalia that took place on Feb. 15 and is thought to be a predecessor of Valentine’s Day. At that festival, goats were sacrificed and men ran through the streets wearing the goat skins, whipping women to bless them with fertility. In another ceremony, girls’ names were placed in a box, from which boys would chose one name; each couple would be paired until the next Lupercalia. The modern South African version owes more to that ritual: On Valentine’s Day, women pin the names of their sweethearts to their sleeves. Occasionally, this is how men discover they have secret admirers.