How George W. Bush Returned to the Republican Debate Stage 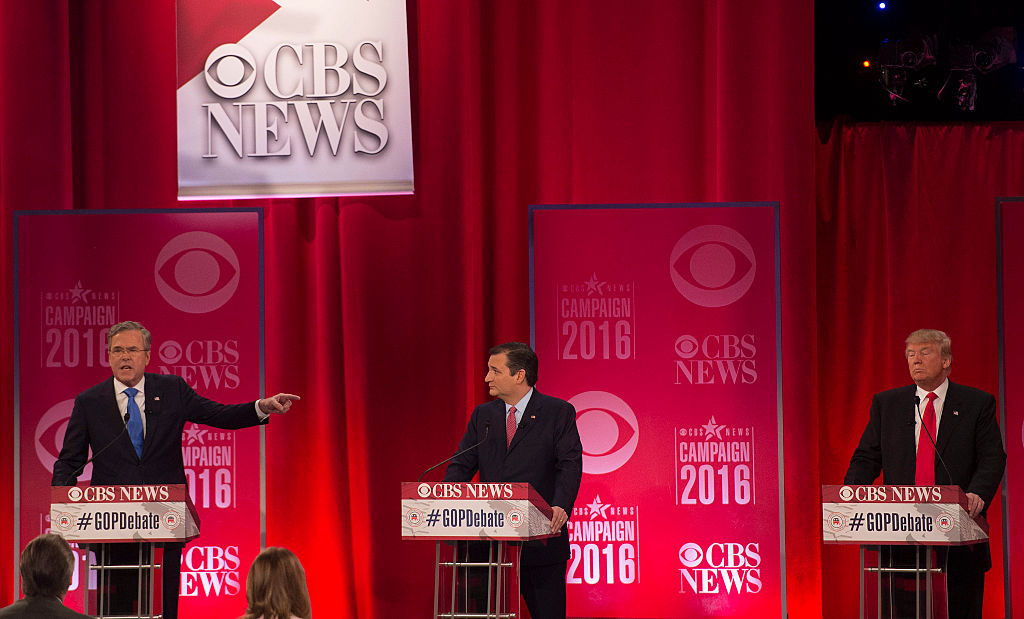 George W. Bush wasn’t on the debate stage in South Carolina, but he may as well have been.

The 43rd President of the United States and brother of candidate Jeb Bush was invoked multiple times during the debate, highlighting tensions between Donald Trump and the more Establishment candidates onstage.

In a brutal interaction between former Florida Governor and Trump, CBS moderator John Dickerson asked Trump if he stood by his previous position that George W. Bush should have been impeached for leading the country into the Iraq war.

“Obviously the war in Iraq was a big fat mistake,” he said. “We spent $2 trillion, thousands of lives, we don’t even have it. Iran is taking over Iraq with the second largest oil reserves in the world. Obviously it was a mistake. George Bush made a mistake. We can make mistakes, but that one was a beauty. We should have never been in Iraq.”

“Here’s the deal,” he said. “I’m sick and tired of Barack Obama blaming my brother for all of the problems that he’s had. And frankly, I could care less about the insults that Donald Trump gives to me… But I am sick and tired of him going after my family. My dad [former president George H. W. Bush] is the greatest man alive, in my mind. And while Donald Trump was building a reality TV show, my brother was building a security apparatus to keep us safe. And I’m proud of what he did.”

“The World Trade Center came down during your brother’s reign, remember that,” Trump interjected, to loud boos from the audience.

Even other candidates were brought into the debate over the Bush family, and they all defended George W. Bush onstage in a state that tends to support his family.

“I thank God, all the time, that it was George W. Bush in the White House on 9/11 and not Al Gore,” Florida Sen. Marco Rubio said later in the debate.

“This is just crazy. This is just nuts. Jeez, oh man,” Ohio Gov. John Kasich said of the sparring onstage, before talking about the situation in the Middle East.

The audience in Greenville, South Carolina, was audibly against Trump during the back-and-forth. Iit’s a state where the Bush family is still popular, and one that’s home to a high concentration of veterans. The crowd loudly booed Trumpdenigrating George W. Bush, and cheered for all the candidates that defended him.

But while Jeb Bush defended his family, one of his answers made an oblique reference to their presidential decisions that was not entirely flattering.

When talking about filling a Supreme Court vacancy in the wake of Justice Antonin Scalia’s death, Bush criticized the Republican approach to nominations that has held since the failed nomination of Robert Bork by President Reagan in 1987.

“The problem in the past is we’ve appointed people thinking we can get them through the Senate because they didn’t have a record, and the problem is that sometimes we’re surprised,” Bush said.

Though Bush wasn’t explicit, that would seem to be a reference to former Justice David Souter, a George H.W. Bush appointee who disappointed conservatives with his moderate views, and Harriet Miers, a proposed appointee of George W. Bush who withdrew in the face of bipartisan opposition.

Later in the debate, Trump criticized Chief Justice John Roberts, who was appointed by George W. Bush, for his role in two decisions that upheld the Affordable Care Act.

Jeb Bush seemed unfazed by the criticism, however, jokingly rescinding an invitation to Trump to come to a rally with George W. Bush in South Carolina Monday.