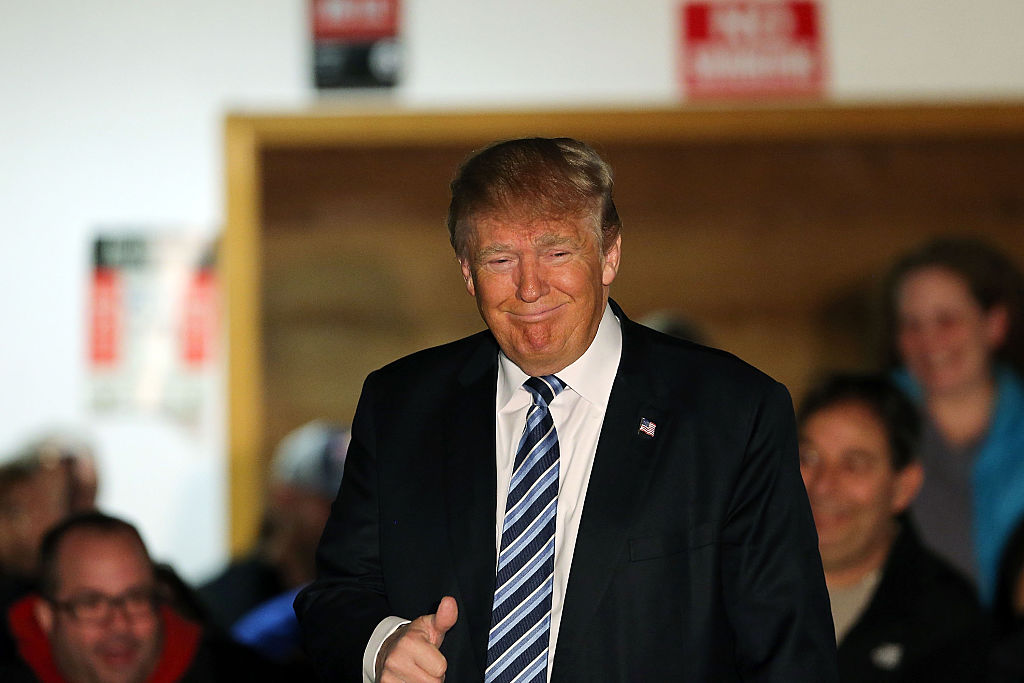 Donald Trump’s supporters trudged through the shimmering snow in hopes of defeating a stereotype. It was a sunny Saturday afternoon, three days before polls open in New Hampshire. The four men, all far from home, were canvassing a pleasant neighborhood of sloping lawns and split-level homes, urging the residents of Windham, N.H., to vote on Tuesday for the real estate mogul.

Phil Hickey, a mortgage-loan specialist from Manchester, Conn., had driven up through a blizzard to knock on doors for Trump. He walked up to a house on his list with an armful of blue yard signs, hoping to plant one on the owner’s corner lawn — prime real estate. A few feet away stood Dane Maxwell, 52, a retired cop from Biloxi who serves as Trump’s Mississippi state director. It’s his 23rd political campaign, a list that dates back to Trent Lott’s first congressional race in 1972, and he’s still marveling at the Trump phenomenon.

“I’ve never seen anything remotely close to this. The massive number of people, the passion of the volunteers,” Maxwell says. “He’s broken every rule in the Republican political game. I don’t think it’ll ever be the same.”

Campaigns are like icebergs; you can see the tops peeking out without having any idea what they look like below. Trump’s teeming rallies, healthy poll numbers and raucous supporters are part of the story. But those who have seen the underbelly of the campaign say there’s not much depth. “What ground game?” Joel Leyden, a former super-volunteer for Trump who now supports Texas Senator Ted Cruz, said when asked how Trump’s get-out-the-vote stacked up. “He has a good organization, but he doesn’t listen to any advice from anybody.”

There’s no denying Trump’s ardent support in New Hampshire, where polls show him with a double-digit lead a day before the nation’s first primary election. But the rulebook exists for a reason. Polls pegged Trump as the winner in Iowa too, but his slapdash get-out-the-vote effort was swamped by Cruz’s sophisticated field operation. Political operatives like to say a good ground game is worth about three points. Cruz drilled his field goal, while Trump didn’t even suit up. “You know, when you hear ‘ground game,’ you say, ‘What the hell is that?’” he admitted on MSNBC’s Morning Joe.

Now his campaign is trying to prove it can turn passion into purpose and channel enthusiasm into votes. Standing on a sidewalk in the glinting sun, Maxwell showed off the smartphone app Trump’s door knockers use on their circuit. It’s a neighborhood map with purple pins denoting the targets. Each pin provides an address, the name of the target voter, whether or not the person is a registered Republican and whether they’ve been canvassed to date. “It’s an elaborate system,” Maxwell says.

Not compared with the one Cruz used to pull his Iowa upset. And while secular New Hampshire isn’t the same fit for the Bible-quoting Texas Senator, the Cruz team thinks it can replicate that success in New Hampshire. “It’s the same ground game,” said Bob Smith, a former U.S. Senator from New Hampshire and Cruz’s co-chair in the state. “We’ve got it here, folks.”

As in Iowa, there’s a converted dormitory to house devoted volunteers, dubbed Camp Cruz. The Texan’s volunteers are dispatched into selected neighborhoods based on voter modeling that cost the campaign millions and includes in-depth “psychographic” profiles of their personality types and suggested methods of persuasion. Houses that need to be crossed off the lists show up in red. Contacted dwellings turned green. Homes where no one answered are marked in blue. Volunteers will return to those again. “This campaign has really invested in technology,” says Abigail Dexter, 23, a Cruz canvasser who spent part of her Saturday clambering over snowbanks in a working-class section of Concord.

The Trump forces are scrambling to catch up. The nerve center of its effort is a drab second-floor suite in a Manchester office building, above a physical-therapy shop and a satellite office of Americans for Prosperity, the Koch-backed political outfit whose New Hampshire branch was formerly run by Corey Lewandowski, Trump’s buzz-cut campaign manager. (“Do your job,” reads a written exhortation, attributed to Lewandowski, in campaign headquarters.)

On Saturday afternoon, about 20 people sat at rows of gray plastic tables, making phone calls beneath framed black-and-white photos of Trump. The boss had dropped by to pay his respects a few days before. “It was electric,” says Malcolm McGaugh, a volunteer from West Hartford, Conn., who is part of a cadre of Nutmeg Staters who have been calling New Hampshire voters. “You can do it while you’re watching TV,” he says.

McGough said he had made more than 1,000 calls the day before, and the campaign is busy searching for more conscripts like him. In an email to supporters in Mid-Atlantic states this week, it encouraged volunteers to visit New Hampshire and “be boots on the ground,” advertising “deployment benefits” like free lodging and meals, the possibility of paid travel expenses, “bragging rights” and the prospect of proximity to Trump himself.

If Cruz is hunting for hardcore conservatives — stray libertarians looking for a home after Rand Paul’s exit — Trump is searching for a totally different cross-section of the electorate: low-propensity voters, Reagan Democrats, disaffected independents and white middle-class conservatives who feel ground down by the strains of a globalized economy. “The blue collar workers who get up, go to work for 8 to 10 hours a day, and still struggle to feed their families,” Maxwell explains. “They’re the ones who speak freely on their front porches.”

Voters like Anthony Bonanno, a bearded 53-year-old in a black hoodie who eagerly accepted a Trump yard sign. Bonanno is an equipment operator for a local union — not a typical Republican target. An avid supporter, he was first contacted by Trump’s campaign a week ago. “A lot of people don’t like the way he talks,” Bonanno says. “I love it. He tells people what we need to hear.”

Down the street, the Trump volunteers surveyed a home on their list with the telltale markings of friendly territory: a Gadsden flag flying out front, an “All Lives Matter” sticker on the door, and twin bumper stickers on the car parked out back: “Trump 2016” and “Hillary for Prison 2016.” “Put about 50 of those signs out there,” the homeowner boomed from an upstairs window, before promising to vote on Tuesday. Jamie Peavy, a Trump field staffer from Meridian, Miss., sank a sign into the snow and suggested he try to bring five of his friends to the polls. “I have no friends,” the homeowner replied.

The candidate’s habits have been a problem in other ways as well. A notorious germophobe, Trump has finally partaken in some of the hand-to-hand retail politicking New Hampshire prizes, hobnobbing in diners and visiting New Hampshire police. But he has spent far less time in the state this week than his rivals. Instead of town halls here, he opted to campaign in places like Florence, S.C., and Little Rock, Ark. He was forced to cancel one of his few remaining rallies Friday when a snowstorm blanketed the state, leaving the candidate — who had headed home for the night, as per his custom, to sleep in his own bed — unable to return in time.

From the beginning, Trump’s wager has been that his skillful manipulation of mass media is a smarter way to campaign. “You know, there’s not so much of a ground game,” he told CNN after Saturday night’s debate. “I think our ground game’s good, but I really think that the debate tonight was more important than the ground game.”

In contrast, Cruz has put his faith in the time-tested formula of old-fashioned fieldwork. Volunteers have bought in. Emily Tremblay, 16, spends her Saturdays going door to door and her evenings calling potential Cruz supporters through the campaign’s website. “This is the painful part,” she says as her tablet loses its Internet connection while canvassing in Concord on Saturday, forcing her to return to a main street to download more addresses. It’s tedious work, but she wants to keep the data flowing both ways — to her device in case someone else is knocking on doors around her, and back to headquarters so they can schedule follow-up phone calls and visits.

The campaign is happy to work with Luddites like Archie Richards, 79, a retired stockbroker who lives in a Concord retirement home. He doesn’t have a smartphone, so volunteers write down a list of houses for him to visit and instructions on what to ask them. “I don’t think this is efficient,” he says. But he trudges back to a rendezvous point on a street corner with notes on who he reached and how they reacted. The campaign dutifully plugs the responses into the system to refine its models.

It is a slog, campaigning the old way. And it wouldn’t work without the doggedness of volunteers like Joshua Lahey, a 21-year-old construction worker from Moultonborough. It’s winter in New Hampshire, so business is slow, and Lahey is using his free time to help Cruz. He knocks on doors and phones neighbors, and on Election Day, he will borrow his mom’s SUV to drive voters to the polls.

On this Saturday afternoon, Lahey is on a run of bad luck. Under siege, many voters have fled to escape. Some don’t come to the door when they are home. Others do, if only to vent. “Please don’t waste the money on leaving that,” one man says, pointing to the flier in Lahey’s hand. This patch of Concord is not Cruz country, and in some cases the yard signs of rival campaigns suggest someone else has gotten there first.

“I’m definitely getting a complex,” Lahey says as yet another house goes silent. “I wouldn’t even pass as a baseball player with these percentages.”

Finally, on his 20th try, a woman willing to talk politics throws open the door. “I haven’t decided yet,” says Julie Haas, 34. “It will definitely be a Republican, though.” Haas says she’s open to Cruz but thinks one of the governors has a better shot at snuffing out Trump here.

Lahey walks off the porch and jots a note about her preferences. “She’s the voter who will decide this,” he says. “I bet we see her again tomorrow.”