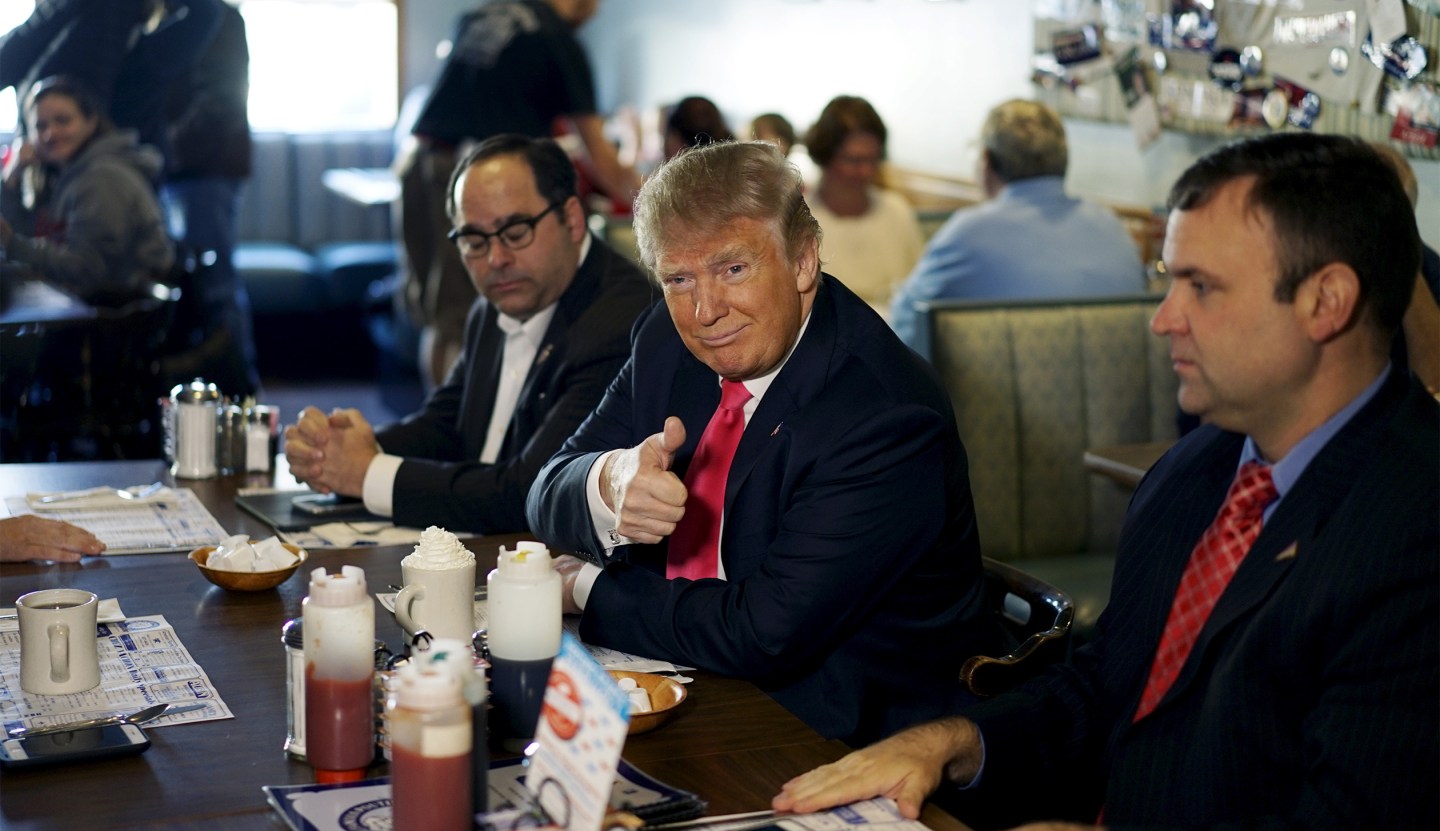 Donald Trump began his first event of the day in New Hampshire by admitting it was unusual territory for him.

“I thought this was just a tiny little venue with a few people going to be here,” the real estate mogul said to an intimate gathering of people in Salem.

“Sit down. Are you able to sit down?” he said, apparently unaware if there was enough space in the room for everyone to have chairs. “This is a little bit different. We crammed a lot of people into this venue, eh?”

It was different. While normally Trump addresses audiences of thousands from behind a podium, Monday morning’s event was more of the true town hall style of retail politics. Trump held a microphone in the center of the room, sans lectern, surrounded by a few hundred people crammed onto temporary chairs.

He spoke for about two minutes before he began the question and answer format, but during the course of the hour he spent in the room, he only vaguely answered many of the specific questions before pivoting to his usual speech material.

Trump’s first question of the day was about what he would do to expand national service opportunities.

“We’re going to look at it very seriously,” he said, before criticizing President Obama for not doing anything on that issue. (That’s not entirely true: Obama has a mixed record on his campaign promises on national service programs, but he did expand the Senior Corps and create an “artists corps” program, among other things.)

Another questioner said his granddaughter had just been born, and asked Trump if he could promise she would grow up safe and receive equal pay.

“She will be so safe. She will be so safe,” Trump said, before launching into his talking points on border security, the Syrian migrants, his vote against the Iraq war, and the need to treat America’s veterans with more respect.

On college debt, Trump said, ““I’m going to look into colleges.… We’re going to do something with regard to really smart financing.”

And when a 13-year-old boy asked him what he would do about the national debt, Trump replied, “We’re going to make our country strong, we’re going to do some great things. Don’t worry about it, just go to school, get an education.”

Although when one voter from Greenwich, Connecticut, asked him if he’d be able to “look [Syrian migrant] children in the face and tell them they can’t go to school here,” Trump was quick and clear with his response.

“I can look in their face and say they can’t come here,” he said.

Trump’s forays into smaller, town hall settings in New Hampshire are evidence of how his team is refining its ground game after a surprising loss in Iowa.

Despite the fact that it’s the final day before the primary, Trump declined to criticize most of his Republican opponents besides former Florida Gov. Jeb Bush.

“If he weren’t in government you wouldn’t hire him to do anything,” Trump said of Bush, also saying “he’s like a spoiled child” and that he’s “not smart.”

Many members of the audience said they had already made up their minds about how they will cast their votes Tuesday night.

A veteran who stood up to ask a question said it wasn’t really a question at all: “I’d like to make some statements of facts here as to why you must be President of the United States,” he began. “I’d vote 10 times if I could.”

“I’m going to follow you around the United States for six months, put my business aside,” said another man in the audience who was from Boston, and said he’d been a fan of Trump since the 1980s.

Later, a woman echoed the veteran: “I agree with the gentleman in the corner, if I could vote 10 times, I would,” she said.

“That’s a minimal number you know, for some people,” Trump joked.

After the event, as supporters filed out and Trump exited, one fan jumped up and down with excitement: “I got a selfie, I got a selfie!”