What a Group of Burmese Punks Have to Teach You about Life, Work and Entrepreneurship 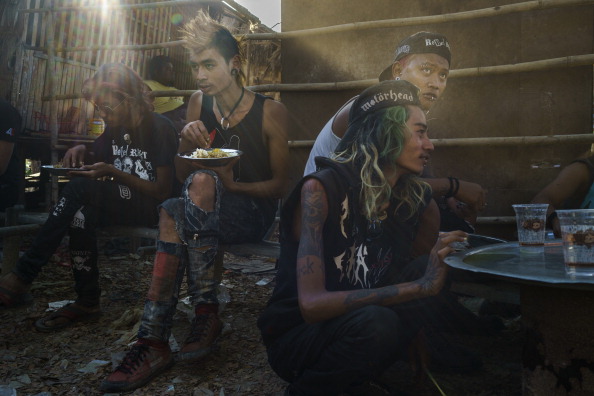 If you lived under one of the most notoriously totalitarian regimes on the planet, you’d probably just want to blend in, go about your business, and fly well under the government’s watchful radar. But that’s precisely what the 27-year old lead singer of a politically-charged Burmese punk band doesn’t do.

Kyaw Kyaw and I met during my recent travels to Myanmar, his studded boots and blazing red mohawk a fierce statement for someone living in a traditional Southeast Asian society.  But it’s not his rebellious fashion that causes a stir, it’s the enterprising avenues his provocative voice has found: establishing the Burmese chapter of the “Food Not Bombs” movement that distributes free food to the poor, bringing his band Rebel Riot to political protests, selling anti-capitalism apparel, visiting neglected communities, and speaking out against religious radicalism.

If you ask him if he’s scared of being such a vocal activist in a country infamous for censorship, civil unrest, and imprisonment of community leaders, he’ll tell you he actually uses fear to point him in the direction of further action. To him, if it’s something no one else dares to do, it clearly must be done.

Kyaw Kyaw has essentially been an entrepreneur since birth. As a child, he created storybooks and charged his friends money to read them, or captured frogs and fish and sold them in improvised marketplaces. Today, he designs politically-charged punk memorabilia to make a living while he pursues music and charitable activities.

To him, entrepreneurship provides the autonomy to generate a reasonable level of income while focusing the majority of his energy on the change he wants to make in the world. Money, possessions, and power are secondary – it’s the impact of his work, whether it be income-generating or not, that’s sacred.

No doubt, an unrelenting focus on one’s purpose requires a beloved instrument. For Kyaw Kyaw and Rebel Riot members, it’s music. Some of the band’s lyrics read, “No fear! No indecision! Rage against the system of the oppressors!” and they regularly appear at public gatherings, playing songs on the subject of dictatorship, religious intolerance, and economic inequality.  But to Kyaw Kyaw and his gang, punk is about even more than just music and style – it’s about filling the role their government simply can’t.

Although Myanmar transitioned to a civilian government in 2010 and censorship has since been relaxed, the boundaries of these expanded freedoms remain  unclear. For Rebel Riot members, no matter how difficult or dangerous their work becomes, they’re in over their heads in something they love, and would quite literally die for. Can you say that about your job?

Kyaw Kyaw, like all of us, knows it’s easy to feel powerless and isolated in the face of large, systematic problems. He also knows that the best remedy is to surround himself with a team that’s ready to put down their glasses, raise their voices, and address an immediate need in their own community.

The biggest part of his success story is that instead of doing the easy thing and complaining, he did the hard thing and rallied together people who were prepared to turn pain points into opportunity. This group decided that instead of talking politics and drinking beer, they would pool their drinking money and cook for homeless people instead.

Over the years, this small initiative has grown to feed an estimated 400 people per month. “We always say we want to change the system, but we should really change ourselves first,” Kyaw Kyaw explained. “There are so many poor people who are getting pushed out of their homes as big companies come to Yangon. The cost of homes and land here has increased by 60% in the last two years, and the homeless population keeps growing. So we asked, what can we do for them?”

If a tiny group of punk rockers in one of the most historically oppressive countries on the planet can pool their kyats to feed the neediest people in their community, then all of us can take greater risks, form stronger teams, and feel empowered to tackle more meaningful gaps in our society and economy.

We can use entrepreneurship to renew our focus on our life’s work, not on just what will simply earn the most money or make us a CEO by 30. We’re already so powerful, important, and capable of change – we just have to recognize the full spectrum of opportunity in our own lives and communities. As we parted ways on the streets of downtown Yangon, his final words summarized the inspiration he seemed largely oblivious to providing: “I know I can’t change the world, or Myanmar, or even this city, but at least I can influence those around me.”

Elaina Giolando writes about the intersection of career, personal development, and travel for today’s 20-somethings on her blog Life Before 30 or @_LifeBefore30.