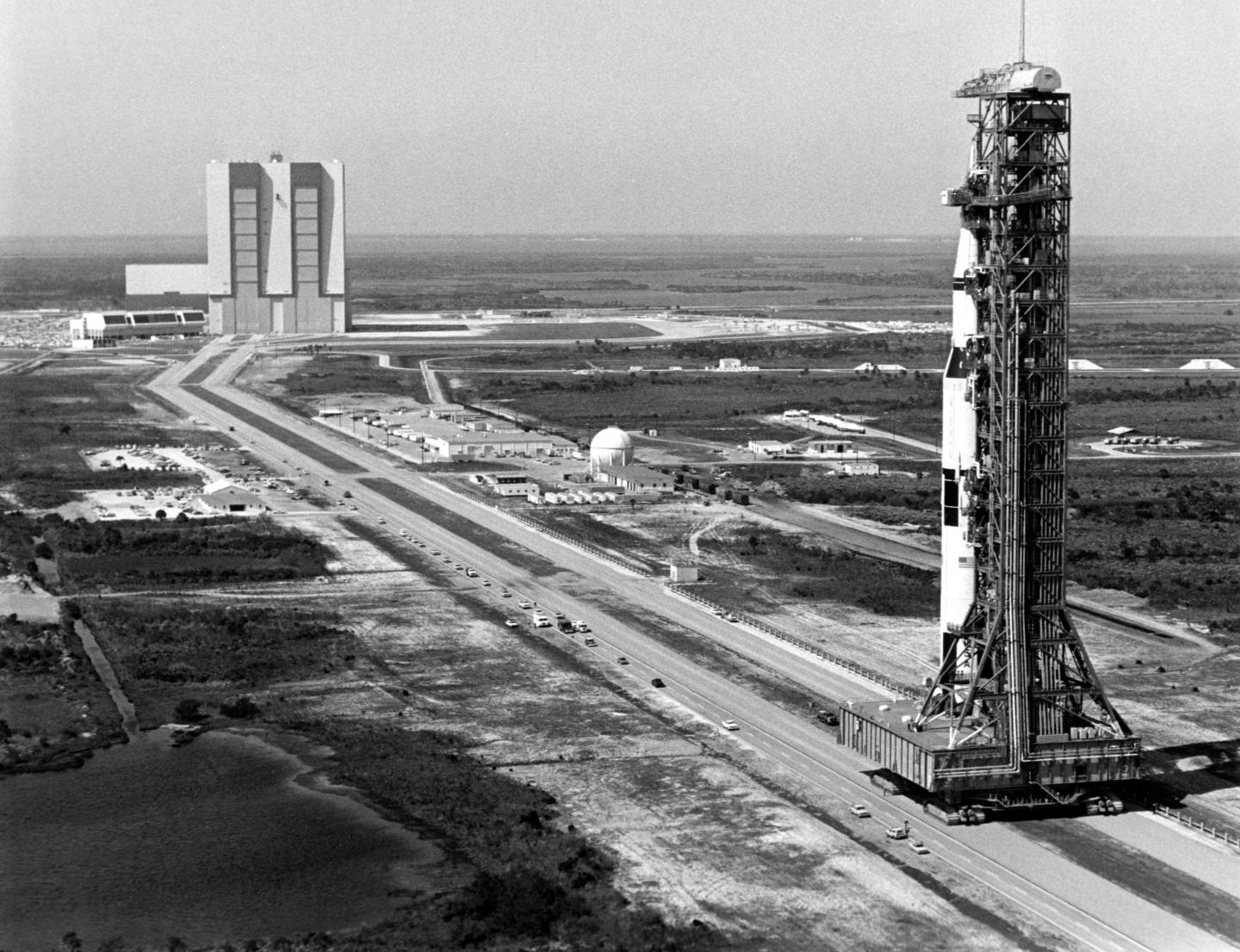 The 363-foot-high Saturn V rocket for the Apollo 10 mission towers over the crawlerway during its rollout from the Vehicle Assembly Building to Launch Pad 39B, four miles away. Apollo 10 marked the first use of Pad B. Astronauts Thomas P. Stafford and Eugene A. Cernan descended in a lunar module spacecraft to 50,000 feet above the moon's surface while John W. Young orbited above in the command module. Image credit: NASA March 11, 1969
Courtesy of NASA

On Thursday, President Obama signed a memorandum establishing a White House task force on cancer—putting a pen to a promise he made in his State of the Union address to launch a cancer “moonshot” in his final year in office.

The aim of this effort—“to make a decade’s worth of advances in five years ,” as Vice President Joe Biden, the task force chairman, has said—is a grand and worthy one, certainly. And Biden has already gotten off to a quick start, meeting in recent weeks with top cancer scientists at the White House, the University of Pennsylvania, and even the World Economic Forum in Davos, Switzerland.

But if the Vice President and his newly formed task force want a glimpse of what it would truly take to achieve this goal, I’d suggest they schedule their next gathering at a site well off the cancer-research grid: Merritt Island, Florida. There’s a narrow, 3.5-mile-long road there, on a marshy slit of land off the Atlantic Ocean, that’s worth seeing up close.

This 130-foot-wide track at the Kennedy Space Center, called the Crawlerway, doesn’t get much notice. But it’s an engineering marvel nestled within the original moonshot—the one that carried men to the moon in 1969. Several private construction firms, working with the U.S. Army Corps of Engineers, spent some 30 months in the early 1960s dredging up an island’s worth of sand and silt, pumping in 2.3 million cubic meters of fill, compacting it with intense pressure, then covering it with layers of rounded gravel known as Alabama River Rock.

By the time the Crawlerway was completed, in February 1966, it could sustain a load of 18.5 million pounds, or an extraordinary 12,000 pounds per square foot of track—enough to withstand the weight of any one of the Saturn or Apollo spacecraft, plus their respective mobile launchers, as well as the monumentally sized (5.5 million pound) “crawler-transporter” that hauled them, inch by inch, from the Moonport’s Vehicle Assembly Building to the launch pad. (Fortune wrote about the project in 1966.)

Designing a road may seem like the least sexy part of what is considered one of the most wondrous feats of engineering in human history. It required no whiz-bang electronics, chemical wizardry, or sophisticated aeronautic science. No mastery of gravity, breakthrough in telemetry, or theoretical mapmaking in a never-before-seen terrain. What makes the construction of the Crawlerway so remarkable, however, is the sheer idea of the thing: It was somebody’s job to know it would be needed, to figure out how to build it, and to make sure it got done.

Facing southwest, this aerial view depicts early construction of Launch Pad 39A, one of two launch sites built for the Apollo Saturn V moon rocket on November 2, 1965. Each site had an eight-sided polygon and measured 3,000 feet across. The pad had a 390-foot-by-325-foot reinforced concrete hardstand standing 48 feet above sea level. The flame trench in the center held a 700,000-pound flame deflector during launch operations.Courtesy of NASA

This was unglamorous, if not quite ordinary, road building. And it’s the stuff that real moonshots are made of, as historians Charles D. Benson and William Barnaby Faherty have marvelously chronicled in an online archive for NASA (which is available as an ebook).

Many research scientists, physicians, and advocates will advise the Vice President that what we need most in the fight against cancer is more research funding. And additional funding would help for sure. But even more than that, we need roads.

We need to establish, for instance, common byways for bioinformatics—communication tools and systems that enable the petabytes of raw biological data pumped out by cancer scientists each year to be classified and organized in a way that they can be understood by researchers everywhere. We now have a Tower of Babel of terminology in the cancer realm, where various technological platforms don’t communicate with one another and where technical “standards” aren’t standardized at all.

We need a far better way to connect cancer patients with clinical trials. Currently, fewer than 5% (and perhaps as little as 3%, depending on the estimate) enroll in such studies—a huge share of which end up never completed due to a lack of patients signing up. And we need a better system for collecting, disseminating, and learning from clinical trial data, much of which is now kept hidden in the trial sponsors’ proprietary “black boxes.”

We need to fix and expand the sporadic processes (and fledgling networks) for collecting, curating, and sharing biospecimens, the human tissue that holds the molecular secrets of each individual cancer.

And we need to build pathways for young scientists to pursue their research ideas. As it is now, too many of the best and brightest post-doctoral students are abandoning cancer science altogether, due to both a lack of funding and a sense that there is little opportunity to conduct independent research. In 1980, more than 40% of the research project grants issued by the NIH went to investigators under the age of 40. Today, that figure is about 10%.

All of this work is about creating connections, about making it easier to share data and tools and ideas. And all of it has to be built and managed in some way…by somebody.

If we’re serious about a cancer moonshot, Mr. Vice President, then someone ought to get out the paving machine. Winning the fight against cancer is not just a long road, it’s several of them.

Clifton Leaf, deputy editor of Fortune, is the author of The Truth in Small Doses: Why We’re Losing the War on Cancer—and How to Win It.