Yet Another NFL Team Settles a Cheerleader Lawsuit Over Poor Pay 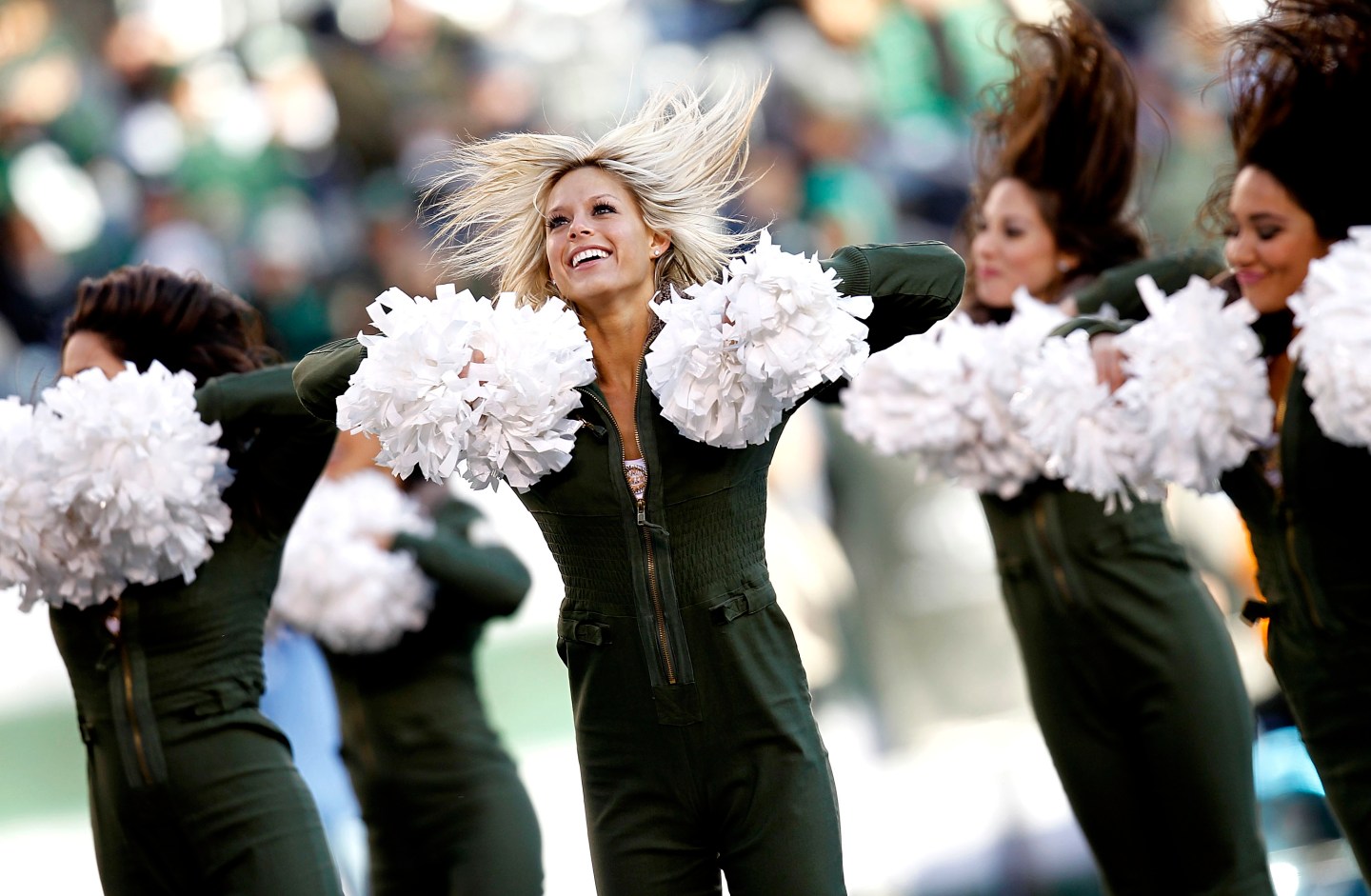 NFL cheerleaders have notched another win against the league in their ongoing battle to earn at least minimum wage.

The New York Jets agreed last week to pay cheerleaders nearly $324,000 to settle claims first filed in May 2014. The class-action lawsuit filed by a woman who goes by Krystal C. claimed that she and other cheerleaders were paid less than the minimum wage. They earned $150 per home game but were not compensated for practice time and promotional appearances, nor were they reimbursed for expenses like hair straightening. (The Jets cheerleaders—known as The Flight Crew—are required to have straight hair.)

The lawsuit against the Jets is one of five filed against NFL teams by cheerleaders. The Oakland Raiders, Tampa Bay Buccaneers, Buffalo Bills, and Cincinnati Bengals faced similar suits. In September, a former Milwaukee Bucks cheerleader sued the NBA team for violating the U.S. Fair Labor Standards Act and Wisconsin’s prevailing wage and payment laws.

The settlement in the Jets’ case, which will be paid out to 52 current and former cheerleaders, is the latest in a series of concessions and legislative victories that have gone cheerleaders’ way.

The first came in September 2014, when the Raiders—the first NFL team to get hit by a cheerleader lawsuit—agreed to a $1.25 million settlement with 90 former cheerleaders. Each Raiderette received at least $2,500 for each season they worked. The Buccaneers settled with disgruntled cheerleaders for $825,000 in March 2015, and the Bengals agreed to pay their cheerleaders $255,000 to end a wage lawsuit in October.

Earlier this month, cheerleaders for the Bills won a court ruling that allowed their lawsuit to go forward. The team had argued that the women were independent contractors and therefore had no labor rights under state law. But a judge ruled that because the women were forced to abide by a strict code of conduct—rules on how to wear their hair, how to maintain proper hygiene, and how much bread to eat in public—there was nothing “independent” about their employment.

In addition to financial payouts, the lawsuits have prompted legislative action. In July, California Governor Jerry Brown signed a law that requires professional sports teams to consider cheerleaders employees and pay them at least minimum wage while compensating them for all practices and appearances.

Lawmakers in New York State proposed a similar bill in June. While the Jets are a New York team, they actually play in New Jersey, as do the New York Giants, so the bill, if passed, may not apply to them. Heather Sager, press secretary for the Independent Democratic Conference, told Fortune that “the legislation would apply to any New York-based professional sports team, such as the Buffalo Jills, New York Knicks or Brooklyn Nets. If the Jets are not based in New York, it would not apply to them.”

Despite the string of victories, it’s not all good news for professional cheerleaders. The settlements from NFL teams have come in spite of a declaration by the Department of Labor in March 2014 that the Raiderettes were exempted from minimum wage laws because they are “seasonal” employees. And the lawsuit against the Buffalo Bills effectively disbanded the team’s cheerleading squad. After the Bills were sued by five former cheerleaders in April 2014, the company that manages the cheerleaders suspended the Buffalo Jills’ operations. A Bills spokesman told Fortune on Wednesday that the team has not fielded a Jills squad at home games for the last two seasons.