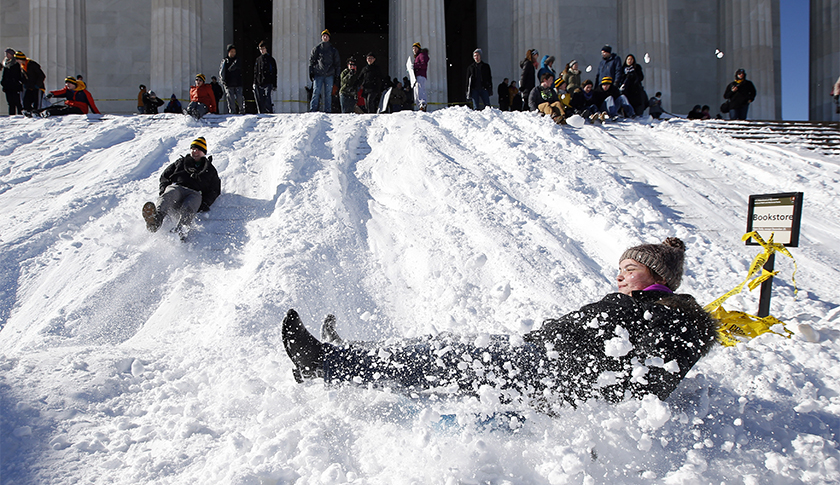 A woman bounces at the bottom as she sleds down the snow-covered steps of the Lincoln Memorial, Sunday, Jan. 24, 2016 in Washington. Millions of Americans began digging out Sunday from a mammoth blizzard that set a new single-day snowfall record in Washington and New York City. (AP Photo/Alex Brandon)
Photograph by Alex Brandon — AP

Airbnb will let you rent out all kinds of shelter to guests, but apparently not Brooklyn resident Patrick Horton’s igloo.

Horton, who lives in the the Greenpoint neighborhood of Brooklyn, listed the igloo he made in his backyard on the home-sharing service as a joke, according to DNAinfo. Horton and his roommates made the igloo over the weekend, with snow provided by the Jonas blizzard.

However, Airbnb sent Horton an email on Sunday evening, telling him he couldn’t list his igloo as it didn’t meet the service’s occupancy standards.

“Unfortunately, your igloo, while very well constructed, has failed to meet our occupancy standards and has been removed from search results,” a Airbnb spokesman told Horton. “Be sure to pick a place with running water, electricity, and a roof that doesn’t melt.”

As DNAinfo notes, there are plenty of other igloos listed on Airbnb—it’s an actual home type hosts can select when registering a listing—and many have roofs that melt and lack electricity.