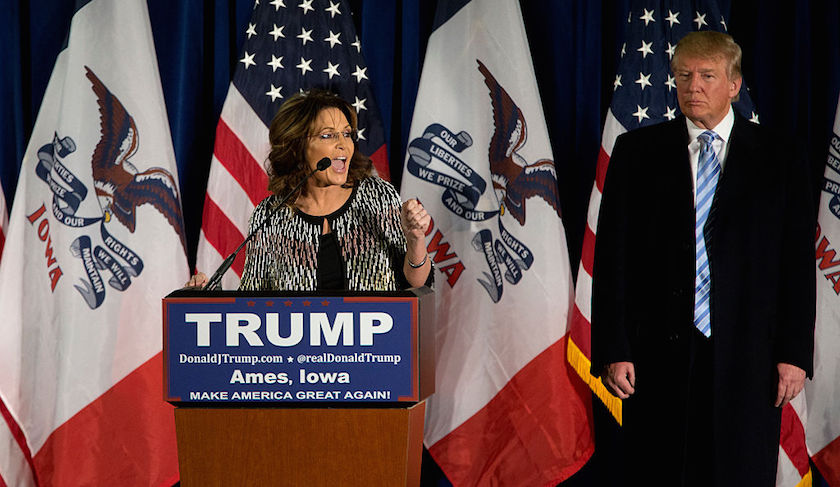 Sarah Palin took the stage in Oklahoma Wednesday to stump for Donald Trump, but in the process mentioned her son’s recent domestic violence arrest.

Track Palin was arrested Tuesday and charged with assault, interfering with the report of a domestic violence crime and possessing a weapon while intoxicated. At the Trump campaign rally, Sarah Palin blamed the Obama administration’s policies towards veterans for abandoning her son. (Track spent a year deployed with the Army in Iraq.)

“I can talk personally about this, I guess it’s kind of the elephant in the room,” Palin said. “My son like so many others, they come back a bit different, they come back hardened, they come back wondering if there is that respect for what it is that their fellow soldiers and airmen and every other member of the military so sacrificially have given to this country. And that starts from the top. It’s a shame that our military personnel even have to wonder, if they have to question, if they’re respected anymore. It starts from the top. The question though that comes from our own president where they have to look at him and wonder, do you know what we go through? Do you know what we’re trying to do to secure America and to secure the freedoms that have been bequeathed us?”

“I can certainly relate with other families who kind of feel these ramifications of some PTSD and some of the woundedness that our soldiers do return with,” Palin continued. “And it makes me realize more than ever it is now or never for the sake of Americas finest that we have that commander in chief that will respect them and honor them.”