Miss Colombia to Steve Harvey: “You Need to Learn to Read” 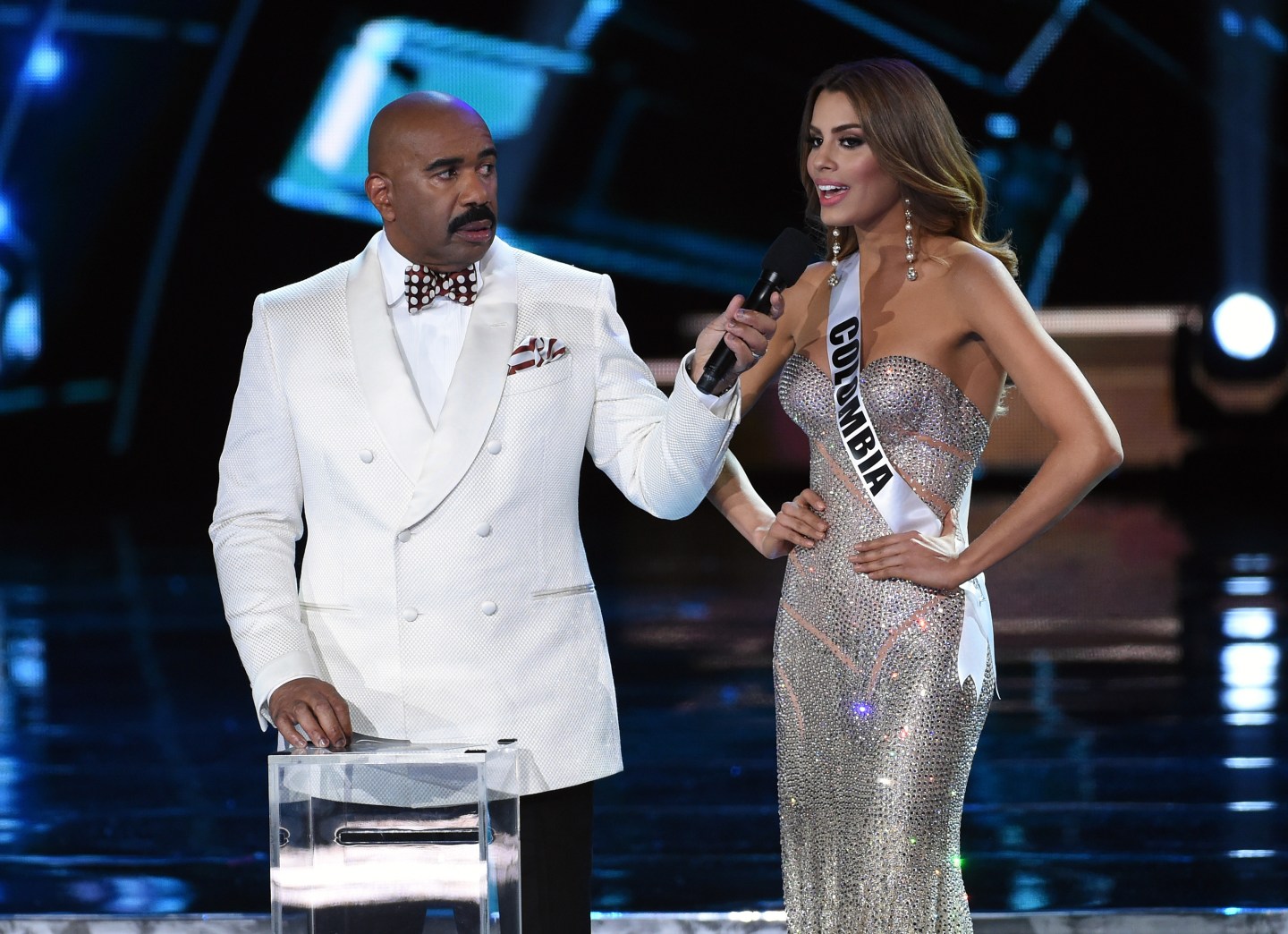 Miss Colombia appeared on the talkshow Steve Harvey on Tuesday for her first major interview since the now-infamous Miss Universe gaffe on December 20. In case you missed it, pageant host Steve Harvey announced the winner as Miss Colombia, then awkwardly retracted, saying Ariadna Gutierrez was in fact the first runner-up. Miss Philippines, Pia Wurtzbach, was the actual winner. In one of the most poignant moments in pageant history, the crown was removed from Gutierrez’s head and given to Wurtzbach.

Gutierrez’s meeting with Harvey was the second of a two-part series titled Miss Universe: The Truth. Wurtzbach, Miss Universe 2015, appeared on the show Monday. Harvey said he wanted to clear the air with both of them, and especially wanted the chance to apologize to Gutierrez.

“You’re the one person that I really wanted to talk to,” said Harvey. “Because of the mistake I made, I cast you into a spotlight and a place I never intended to….I just want to say how sorry I am…and that it was you.” He later apologized to her father for the tough situation he put his daughter through.

Gutierrez said she has forgiven Harvey and now realizes that was happened is her destiny. “Maybe I’ll be bigger than Miss Universe,” she said. This echoes what she said in her Instagram post from soon after the pageant.

After the storm comes the calm. I want to thank each and everyone of you who have sent messages of support and strength. Every one of you has become an incredible human being in my book and I am the most fortunate and thankful for having the support not only from one country but from the whole entire world. Your destiny is written for you. And my destiny was this. I was able to bring happiness to my country after becoming Miss Universe for only a couple of minutes… Today because of that COLOMBIA and the LATIN COMMUNITY are being talked about in every corner of the world. I also want to congratulate the Philippines for their new Miss Universe 🙏🏼. The happiness that you must be feeling must be incredible. Life continues and in the future we will find out why things happen the way they happen. Thank you all for your LOVE SUPPORT and KINDNESS. ❤️

Harvey’s mistake certainly did not go over without repercussions. To make matters worse, when he apologized for the incident on Twitter, he misspelled both “Colombia” and “Philippines.” Throughout the interview with Gutierrez, he continually mispronounced her name. Miss Colombia corrected him in front of his live studio audience. He blamed the mistake on the teleprompter. Sound familiar?

Harvey said he has received death threats and his effigy was burned on the streets of Colombia. Gutierrez apologized on behalf of Colombians, adding: “We had a chance to go back-to-back. People in the Latin American community felt bad. We were humiliated.”

Miss Universe 2014 was Miss Colombia Paulina Vega, who happens to be Gutierrez’s cousin. Vega was Colombia’s first Miss Universe since 1958.

“In Colombia, after the president comes the Miss [Universe],” said Gutierrez.

Harvey proceeded to ask Gutierrez how she thinks he handled the situation. Gutierrez said, with a chuckle, “you need to learn how to read cards, because it was on the card. You wanted me to win, you know.” She also said she thought Harvey was about to tell a joke when he jumped into the pageant broadcast to correct his mistake. “If you watch the video, I was laughing.”

Gutierrez told Harvey that she kept telling people throughout the pageant how much she liked him, but after his mistake, she regretting liking him so much. “It was a nightmare,” she said. “It was the worst night of my life, but also the best. I have the picture with the crown and the Miss Universe sash.”

Following the pageant, Gutierrez was with her family in Miami, relaxing and recovering from her very public humiliation.

Harvey closed the interview by offering to help Miss Colombia with anything she needs, telling her she has a very bright future ahead of her.