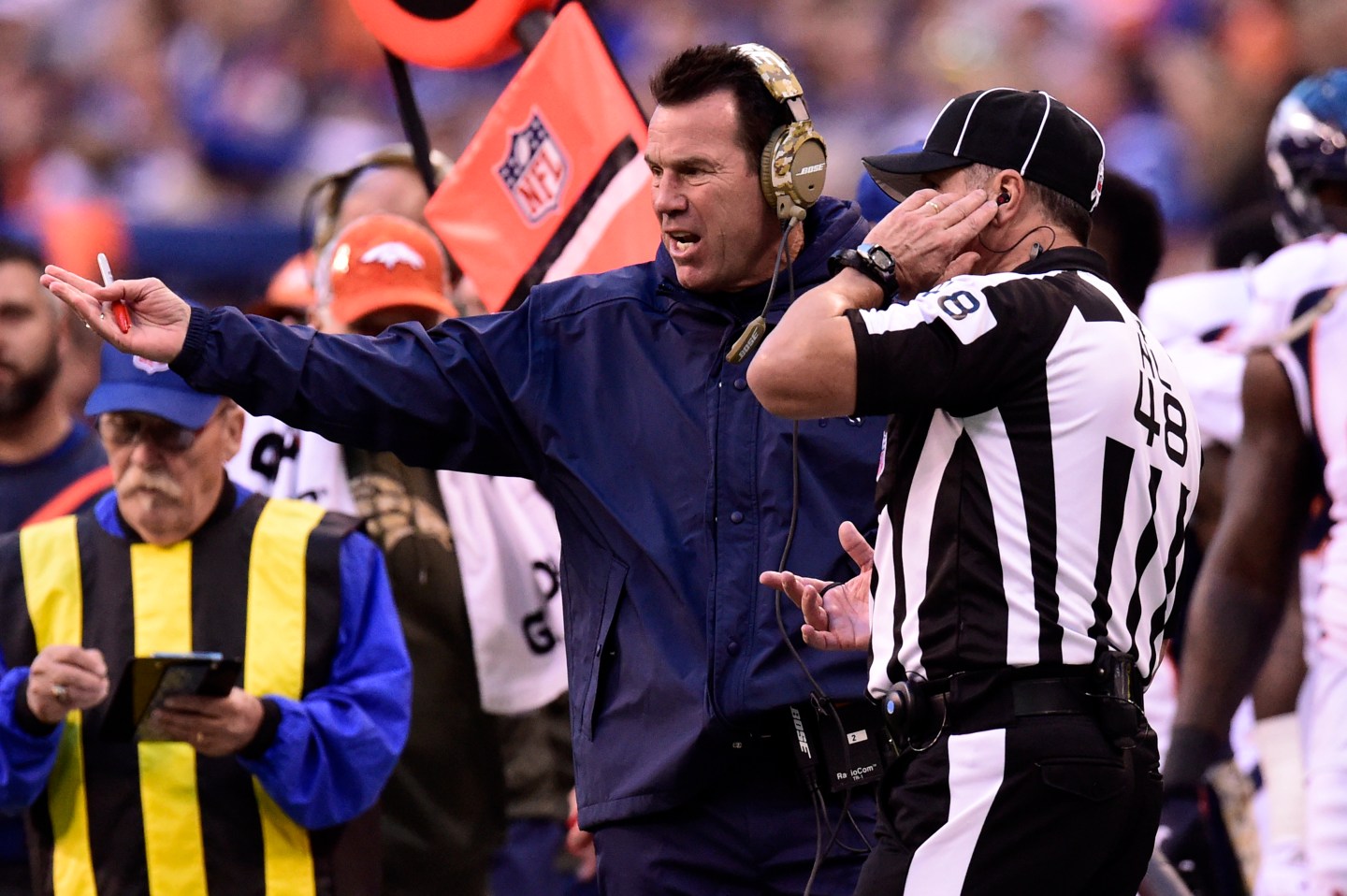 INDIANAPOLIS, CO - NOVEMBER 08: Head coach Gary Kubiak of the Denver Broncos argues a face masking call on his team while playing the Indianapolis Colts during the first half of play at Lucas Oil Stadium. The Indianapolis Colts hosted the Denver Broncos on Sunday, November 8, 2015. (Photo by AAron Ontiveroz/The Denver Post via Getty Images)
Photograph by Aaron Ontiveroz — Denver Post via Getty Images

Five team executives, seated around a conference table, introduced themselves. They gave their names, and briefly, their backgrounds. Then, they got right down to business.

“How would you change the culture of our team?” one asked.

That’s how the job interview began for one of the seven NFL teams in the market for a new head coach this January. No two interviews are alike, not even between candidates interviewing with the same team. But the objective is always the same: Over the course of a few hours, NFL executives are trying to figure out if the person sitting in front of them has what it takes to lead their football team.

There’s more to it than just one meeting: phone calls, checking references around the league, and the candidates’ on-field résumé. But what happens in the interview can make or break a coach’s career aspirations. For a peek behind closed doors, we talked to several people who have sat on both sides of the interview table, this year and in years past.

The “room” can be anywhere: a team’s headquarters, Dolphins owner Stephen Ross’ New York business office, a New York hotel while 49ers brass was in town for league meetings, or a conference room at Paul Brown Stadium the day after Hue Jackson’s Bengals lost in the wild-card round. Teams book first-class plane tickets for candidates who are traveling to meet them, send a limo to the airport, and put them up at five-star hotels. Interviews are often scheduled in three-hour blocks, but they almost always last longer—four, five, maybe six hours if everyone is hitting it off. (Pro tip: eat beforehand, because no one is breaking for lunch.)

There’s been a shift over the past few hiring cycles, from the candidates making a presentation to teams now leading the conversation. “Teams want to control the interview,” says one coach who interviewed this year.

One team began with the question about changing the culture. Another opened with, “Why do you think you should be the head coach of the (insert team name here)?” One candidate recalled being asked, “Do we have a chance to win in (insert city here)?”

Team owners have to sell whomever they hire to their locker room and their fan base, but first their next head coach has to sell himself: What is his vision for turning the team around, and how will he put that vision into motion? Take out the guesswork, agents tell their clients. Teams want to know the specifics of your vision. Charley Casserly, the former Washington and Houston general manager who serves on the NFL’s career development advisory panel, reminds prospective head coaches of a phrase he once heard that speaks to the essence of the interview process: “How are you going to win a game?”

“You’d be surprised,” says one team executive who hired a new head coach this year. “People really reveal themselves.”

Here’s an example of what that means: The candidate who said his vision for the offense will be whatever the coordinator wants is not ready to be a head coach. Here’s another: If an offensive coordinator interviewing for a head-coaching job still wants to draw cards for the game, that’s a sign he hasn’t graduated to being the CEO of a team.

The longest block of time in most interviews is spent going over the candidate’s prospective staff. Coaching positions are in flux at this time of year, and you’re not always able to get the assistant you want, so candidates have to present a depth chart—three or four deep—of their top choices at every position from the coordinators to the position coaches. Be prepared to defend your choices if the team doesn’t like them. One owner, for example, vetoed a candidate’s third choice for a coordinator during their first interview.

“Staff is the single most important thing, because it shows judgment,” says Casserly, who was a consultant for the Jets coach and GM searches last year. “Everything else in the interview can be scripted, but staff is judgment. If he has the staff wrong, I’m not going to hire him.”

A significant chunk of time is also spent on the team’s player personnel—not so much whom to cut, because cleaning up salary cap issues is the GM’s job. But what is the coach’s plan for making it work with players the team is committed to financially, such as a disgruntled star who’s earning more than the coach, or a regressing quarterback? Adam Gase won over the Dolphins by explaining his philosophy that coaching a quarterback can’t be one-size-fits all, backed by his experience blending different offensive systems and styles to best suit the spectrum of QBs he’s coached: Tim Tebow, Peyton Manning, Jay Cutler and now Ryan Tannehill.

What other pieces do you need? Casserly recalls Joe Gibbs telling Washington, I can get 1,000-yard receivers, but what I need to have is a bell-cow running back and an offensive line. Andy Reid told Philadelphia, I want two offensive tackles, a quarterback, two pass rushers, two corners, and I’ll figure the rest out.

Coaches who are interviewing while still in the playoffs have a disadvantage because they don’t have the time to spend hours breaking down film of the teams they’re interviewing with. Agents help out by arming their clients with information. One spent hours calling active players on the teams his client would interview with, asking for insight on what went wrong, who are the problem players in the locker room, how often the owner is around, and so forth.

One team executive says for coaches still in the playoffs, he tests their aptitude to evaluate talent based on what they know: the roster of the coach’s current team, his division opponents or even recent evaluations of college players entering the draft. He recalls one candidate in a past hiring cycle who eliminated himself because his player assessments were way off base. A player with a good 40-yard dash but who didn’t play fast, he called a really fast guy. He praised another player as instinctual when everyone else agreed his lack of instincts was one of his biggest weaknesses. An eye for talent can’t be taught. “I stopped counting at seven things he got wrong on players,” the evaluator said. “It becomes a percentage thing after a while.”

Another integral part of the interview is assessing the prospective head coach’s ability to lead a roster of 53 men. It’s never a sure thing because teams are usually considering a former head coach who failed in his last NFL job; a college coach who has never led an NFL team; or an up-and-coming assistant trying to make the biggest jump of his career.

To take out some of the guesswork, at least two teams within the past few years have used the input of psychologists during their coaching search. One team asked candidates to submit to a three-hour evaluation by a psychologist to assess strengths and weaknesses as a leader—not mandatory, but all the candidates agreed to it. Another team generated psychological profiles to see how the coach and GM would match with each other.

That’s just one data point, of course. A lot of the conversation in the interview room is centered on how the potential coach would lead, in good times or bad. As one executive puts it, “How are they going to be on a Monday morning after their third loss in a row?”

Here are some of the questions candidates were asked this year:

What will your first meeting with your players be like?

How will you relate to millennials and keep your approach fresh?

Do you believe coaches or scouts should have final say on personnel evaluations?

What is your discipline policy when players get in off-the-field trouble?

If a star player doesn’t show up to offseason workouts, how will that affect the team, and how will you respond?

What is a time when you faced adversity as a coach, and how did you respond?

Here’s how one candidate answered the adversity question: He cited a time when his team traded for a player whom he soon realized had trouble learning, to the point where it had affected his playing time with his previous team. The coach spent $600 an hour to meet with a sports and performance psychologist, learning how to become a better teacher to a slow learner. The player went on to have a career-best season under his new coach. Days later, his answer stuck out in the minds of the people he’d met with, even after they’d done several more interviews.

Sometimes the smallest details say the most: Casserly recalls that when Todd Bowles interviewed with the Jets, the fact that he was so in command of the conversation and never once opened his notes impressed everyone in the room.

Interviews are a two-way street. Those who interviewed with the Browns, for example, had to ask questions about how the new power structure with EVP of football operations Sashi Brown and chief strategy officer Paul DePodesta would work. A veteran coach like Tom Coughlin would have been expected to have long conversations with the Eagles about how much power they would be willing to give him in the organization.

As far as deciding which interviews to take, it depends on the candidate and the situation. Two agents said they would have been hesitant to send clients to Tampa Bay this year, since it felt like the organization went into the search already intending to hire Dirk Koetter. Minority coaches have an additional layer to consider: Are they a serious candidate, or simply a formality so the team can satisfy the Rooney Rule? Less experienced candidates look at interviews as advertisements for the future—or, possibly, a runner-up prize, a coordinator job with the same team.

Casserly tells the coaches he advises to finish every interview the same way: “I want this job.” Most candidates give team executives a “leave-behind packet,” a magazine-length pamphlet that lays out their career path, their coaching influences, a résumé detailing stats and players they’ve worked with and their plan for the team, including nitty-gritty details like practice schedules and team itineraries for road trips. The prospective coaches put these together themselves during the offseason.

“Be yourself. That’s the most important thing I have learned, especially this time around,” says Gase, who landed the Miami job after interviewing with nine teams between this year and last. “Last time, mostly, I was a little nervous going into the process. And if you are nervous, you can’t truly be yourself. This time I felt a lot more comfortable. I could articulate exactly how I felt about so many situations. My passion and my energy came out. I really feel like, this year, teams saw who I really am. So what I would say to guys out there, just go in there and be yourself every minute you are in the room with them.”