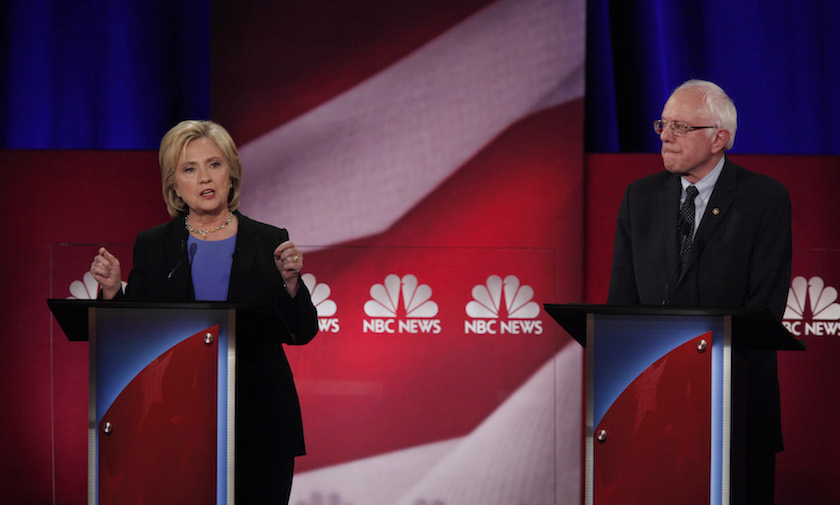 The conversation shifted early in the debate to gun violence—an issue all too familiar to the people of Charleston, where nine black parishioners were gunned down during a Bible study class last year just a block from the site of the debate. Sanders was questioned about his position on gun manufacturers, an issue on which Clinton has targeted him throughout the campaign.

NBC host Lester Holt asked Sanders why he changed his position on immunity for gun manufacturers shortly before the evening’s debate. Sanders had come out in support of a bill that increases gun manufacturers’ accountability, but said he would still want to support “mom-and-pop” gun stores.

Sanders defended his position at the debate, saying he’s consistently received a “D-minus” score from the National Rifle Association, he supports an “instant background check” for gun purchases, and he supported President Obama’s targeting of the so-called gun show loophole in his recent executive actions.

“We have seen in this city a horrendous tragedy of a crazed person praying with people and then coming out and shooting nine people,” Sanders said. “This should not be a political issue. What we should be doing is working together.”

But, this is politics: gun control is one of the hottest political issues of the 2016 primary. And Clinton saw Sanders’ response as an opportunity to attack his record on guns.

“I have made it clear based on Sen. Sanders’ own record that he has voted with the NRA, with the gun lobby numerous times,” she said before listing Sanders’ votes on the Brady bill, loopholes in background checks, manufacturer immunity, and research on guns. “Let’s not forget what this is about—90 people a day die from gun violence in our country. That’s 33,000 people a year.”

“I am pleased to hear that Sen. Sanders has changed his position on immunity and I look forward to him joining with those members of Congress who have already introduced legislation,” she said.