Here’s Why Iran Is Behaving Better, For Now 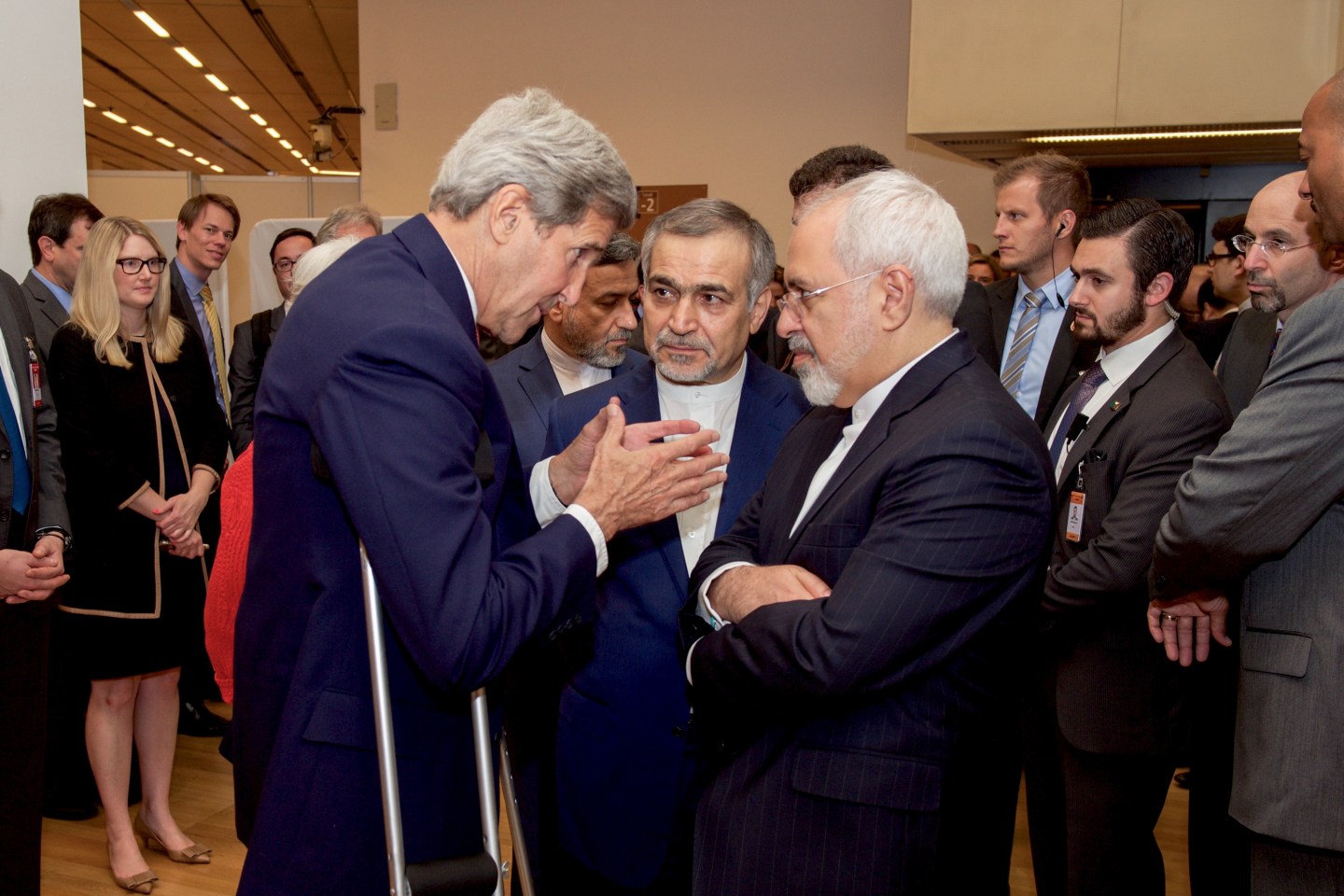 U.S. Secretary of State John Kerry (L) speaks with Hossein Fereydoun (C), the brother of Iranian President Hassan Rouhani, and Iranian Foreign Minister Javad Zarif (R), before the Secretary and Foreign Minister addressed an international press corps gathered at the Austria Center in Vienna, Austria, July 14, 2015. Iran and six major world powers reached a nuclear deal on Tuesday, capping more than a decade of on-off negotiations with an agreement that could potentially transform the Middle East, and which Israel called an "historic surrender". REUTERS/US State Department/Handout via Reuters FOR EDITORIAL USE ONLY. NOT FOR SALE FOR MARKETING OR ADVERTISING CAMPAIGNS. THIS IMAGE HAS BEEN SUPPLIED BY A THIRD PARTY. IT IS DISTRIBUTED, EXACTLY AS RECEIVED BY REUTERS, AS A SERVICE TO CLIENTS - RTX1KB6I
Photograph by U.S. State Department via Reuters

They say these things come and threes, and the news that Iran has released Washington Post journalist Jason Rezaian and three other dual nationals follows two other developments that certainly seem to indicate rising strength for the forces of moderation in Tehran: The swift release Wednesday of 10 U.S. sailors who had stumbled into Iranian waters, and the official response to the the Jan. 2 ransacking of the Saudi Arabia embassy by hardline thugs, who were arrested, rather than slapped on the back.

It all might be understood, at some later date, as the start of a new era between Tehran and Washington. But for now, it’s all about the money: Saturday also just happens to be Implementation Day for the nuclear deal that was announced way back on July 14, but has not provided Iran any relief from sanctions. That will change as the U.N. confirms Tehran has in fact dramatically scaled back its nuclear program, which in turn goes a long way toward explaining what, for Iran, amounts to a run of exemplary behavior.

“It’s a good day for the people of Iran … The sanctions will be lifted today,” Iranian foreign minister Mohammad Javad Zarif said Saturday after arriving in Vienna, where Secretary of State John Kerry was also scheduled to arrive. The Islamic Republic stands to gain access to $30 billion once its banks regain access to the international banking system known as Swift. It will also be free to sell its petroleum around the world, no doubt further depressing oil and gas prices in the process.

Still, money is money, and Tehran needs all it can get. Ordinary Iranians have suffered staggering inflation and other hardships under the sanctions, the removal of which should provide a tailwind for President Hassan Rouhani and his political allies as they head into parliamentary elections slated for Feb. 26. In Iran’s theocratic structure of government, the legislature is (like the President), far less powerful than the unelected bodies controlled by the Supreme Leader, Ayatollah Ali Khamenei. But elections nonetheless carry substantial import as indicators of public mood. That would be one reason U.S. officials reportedly hastened to assure Iran obtained its oil export certification before voters went to the polls — to reward moderates, and deny hardline critics the opportunity to accuse the West of not living up to its side of a nuclear deal the hardliners saw as a blow to national pride.

In the long run, Iran’s population is growing steadily more moderate and open to engagement with an outside world, including the West that has been kept at arm’s length, first by revolutionary ideologues, then by sanctions. ”This is something happening year by year, step by step,” a female medical student told me in Tehran in October. “Because younger people have different ideas.”

But transitions produce turmoil, and we should expect more turbidity for a while. One prisoner who was not released Saturday was Siamak Namazi, a brilliant analyst and businessman who holds both Iranian and American passports. Taken by the intelligence wing of the Revolutionary Guards while visiting Tehran in October, Namazi’s arrest was seen as a signal that the Guards — the biggest players by far in Iran’s economy — do not look kindly on the prospect of competition from Iranians with one foot in the West. Other reactionary elements in the ruling structure fear any opening to the world, preferring the hothouse isolation that produces such rare specimens as former Iranian President Mahmoud Ahmadinejad.

More will be known after Feb. 26 — when Iranians elect not only legislators, but also the clerics who make up the Assembly of Experts, the traditionally sclerotic body that decides who will serve as Supreme Leader, a position Khamenei will likely hold until his death. Clear wins for moderate forces in either body — but especially the parliament — will have consequences, likely steering the Leader to policies that line up with the expectations of a public that has spoken.

But don’t expect anything to happen as fast as events have unfolded in the last couple of weeks. There’s another, much bigger election scheduled for November — in the U.S., where American hardliners in both Congress and on the presidential trail are finding a promise to undo the nuclear deal works as an applause line.