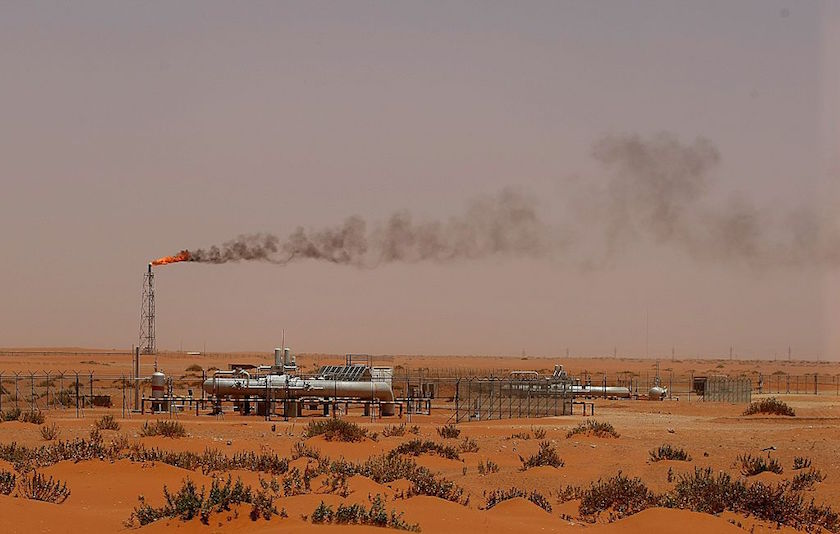 A flame from a Saudi Aramco oil installion known as "Pump 3" is seen in the desert near the oil-rich area of Khouris, 160 kms east of the Saudi capital Riyadh, on June 23, 2008. Oil producers are at war with speculators but they have been left speculating themselves over the future of their precious commodity after a unique summit, analysts said. Government ministers and traders alike are anxiously waiting to see which way prices go in coming weeks after Sunday's summit of consumers and producers, which Saudi Arabia called in response to the doubling of the cost of a barrel of oil over the past year to almost 140 dollars. AFP PHOTO/MARWAN NAAMANI (Photo credit should read MARWAN NAAMANI/AFP/Getty Images)
Photograph by Marwan Naamani—AFP/Getty Images

Iran is determined to raise its oil output as planned as soon as sanctions on its oil industry are lifted, Mehdi Asali, its representative to the OPEC producers’ group, said on Saturday.

The international sanctions were expected to be scrapped later on Saturday as part of a landmark deal between major powers and Iran to curb Tehran’s nuclear program.

Asali appeared to strike a defiant tone, contradicting earlier comments from other senior Iranian oil officials that Iran would not flood the market at a time of global oversupply and an oil price crash. Oil Minister Bijan Zanganeh said this month Iran would not seek to distort markets but would make sure it regained its market share.

But the state news agency IRNA quoted Asali as saying: “We have not moderated our plans regarding increasing output when sanctions are lifted. It will be increased by 500,000 bpd (barrels per day), and by another 500,000 bpd shortly after that.”

He said Iran had no intention of entering an oil price war with rival producers.

But a full return of Iran to the international oil market could put it on a collision course with Saudi Arabia and other Gulf members, who have been resisting trying to shore up prices by cutting output.

The world is now producing 1.5 million barrels a day more than it is consuming, with Iran promising to add another million bpd over the next 12 months.

Saudi Arabia was instrumental in getting OPEC in 2014 to maintain high production levels to defend its market share, rather than reducing supply to support prices.

At a meeting on Dec. 4, OPEC members failed for the first time in decades to agree a production ceiling. But they are increasingly divided over the merits of the shift.

Gulf oil sources have expressed doubts that Iran can raise production as swiftly as it says it can, and have said it is not likely to increase production by more than 200,000-300,000 bpd by the end of this year.

Benchmark Brent blend fell below $29 on Friday, closing below $30 a barrel for the first time in 12 years.