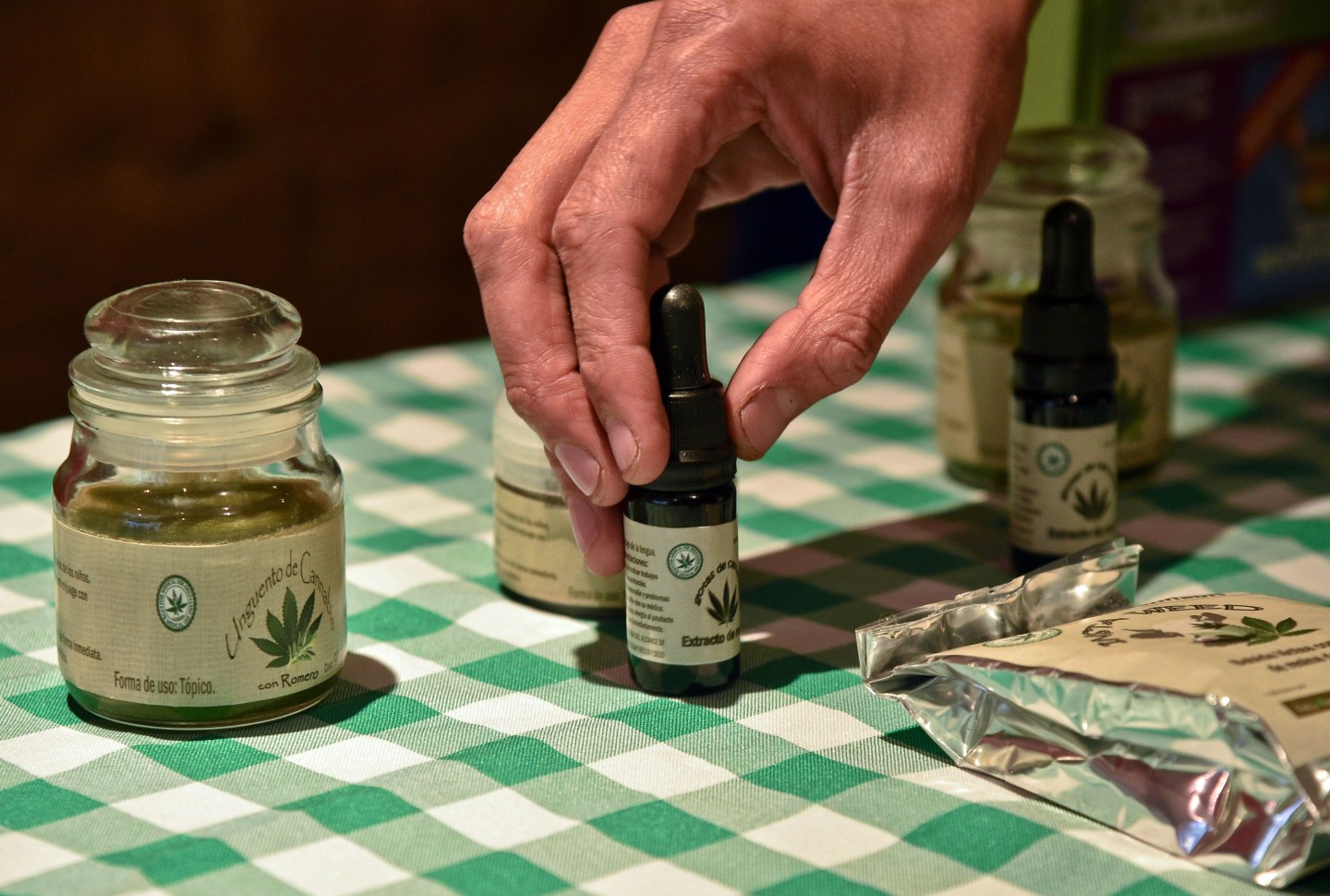 A man displays for sale cannabis-made products for therapeutic use at a fair of products and derivatives of marijuana for medicinal use in Bogota, Colombia, on December 22, 2015. On Tuesday, Colombia legalized medical marijuana through a decree signed by President Juan Manuel Santos, which regulates the cultivation, processing, importation and exportation of cannabis and its derivatives for therapeutic purposes. Colombia thus joins to Mexico, 23 states of US and Uruguay, which have allowed the use of cannabis for medicinal purposes. Chile, meanwhile, is studying a decriminalization in a draft legislation in Congress. AFP PHOTO / GUILLERMO LEGARIA / AFP / GUILLERMO LEGARIA (Photo credit should read GUILLERMO LEGARIA/AFP/Getty Images)
Photograph by Guillermo Legaria—AFP/Getty Images

Famous for its cocaine cartels—think Pablo Escobar and the hit Netflix show Narcos—Colombia now wants a cut of a different mind-altering substance: marijuana.

The country’s climate and regulations make it ideal for marijuana farming, Colombia’s health minister Alejandro Gaviria said in an interview with Bloomberg earlier this month. Gaviria pointed out that increased legalization of cannabis in North America has created an economic opportunity for the country. “This year, we’re going to see international companies coming to Colombia to produce medical marijuana,” he told the publication.

Last month, President Juan Manuel Santos signed a decree to legalize the growth and sales of marijuana for medicinal purposes. According to chapter 1, article 1 of the decree:

“The current decree’s objective is to regulate the cultivation of cannabis plants, the authorization of the possession of seeds for the planting of cannabis, control of the areas for cultivation, the production and manufacturing processes, as well as the exportation and importation and the use of the product and its derivatives, strictly designated for scientific and medical purposes.”

The new rules “represent a major step that put Colombia at the vanguard and forefront of the fight against illnesses,” Santos said during the signing ceremony, according to the Associated Press. He stressed that the decree applies only to marijuana used for medical and scientific purposes.

While it’s notorious for cocaine, Colombia isn’t new to the marijuana trade. According to a U.S. Library of Congress country study, marijuana cultivation arrived in the country during the first decade of the twentieth century, and then took off in the 1960s as a result of the growing demand generated by the U.S. market. By the late 1970s, when drug enforcement along the U.S.-Mexican border tightened, the epicenter of marijuana production shifted to Colombia, which at the time accounted for about 70% of the marijuana reaching the U.S. from abroad.

Today, cannabis continues to be popular: 408 tons were seized in the country in 2013, according to the UN’s 2015 World Drug Report.