Rey Arrives in the Second Wave of ‘Star Wars: The Force Awakens’ Toys 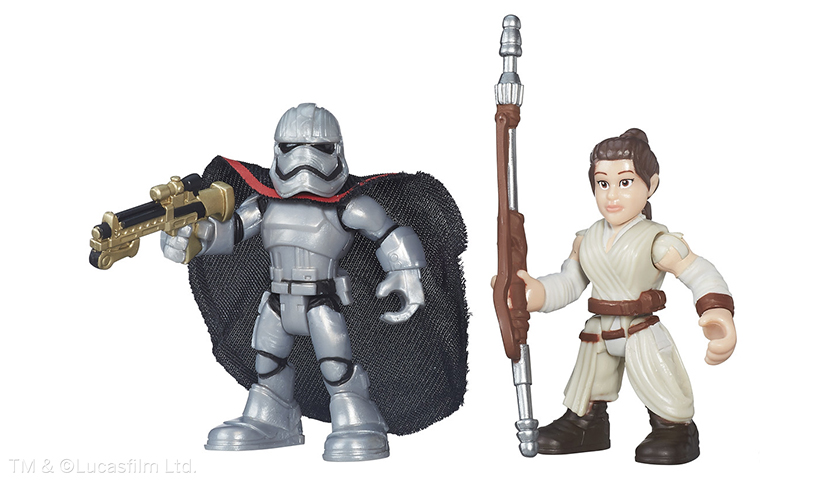 “This should begin to make things right.”

Those are the first words spoken in Star Wars: The Force Awakens, and they also apply to the new wave of toys and merchandise that begins rolling into stores this month, many of them prominently featuring Rey, the scavenger-turned-hero whom fans have been missing.

This gallery includes 10 exclusive images of new Star Wars toys, but those who’ve been following the #WheresRey controversy on social media may be most interested to see how Daisy Ridley’s character is represented—especially since she was left out of a few early products, like the Target collection of figures and The Force Awakens Monopoly game (which annoyed even director J.J. Abrams.)

“This new wave of product has got key elements from the film. You see Rey with a saber, her blaster, and a number of other elements we wanted to hold back until the film had been released,” says Paul Southern, head of Lucasfilm licensing (DIS). “The timing is good to try to address some of the social discussion that has been created through the ‘Where’s Rey?’ movement.”

The short answer is: Here she is …

An earlier action figure, released in September, featured Rey in her scruffy-looking desert scavenger gear (which is how she spends most of the film). But this new Hasbro figurine features her more refined “Resistance outfit” from the final scenes of the movie, as well as her newfound weapon of choice—the blue laser sword once owned by Anakin and Luke Skywalker.

One reason for recent fan frustration is that existing Rey toys have sold faster than they could be restocked. “Rey is clearly the standout character in the film,” Southern said. “We always knew that was going to be the case, but the excitement around her is a lot more than we were expecting it to be.”

“You might need this …” That’s what Han Solo says as he hands the less playful version of this blaster to Rey in the film. The Star Wars merchandising team and retailers simply didn’t realize how much fans were going to need of her.

Coupled with a deliberate decision to withhold much of her character arc from the early toys, the result was simply too little Rey to meet demand. While there were many Rey products elsewhere, Southern acknowledges the mistake of those toys and games that provoked outrage by leaving her out. “We were less focused on the [products] she wasn’t in, and those are the ones that got a lot of attention,” he told EW.

This promo image for Hasbro’s new lightsaber toy is notable for placing the sword in the hands of a young girl – and for identifying the weapon that Luke Skywalker lost during his Cloud City duel with Darth Vader in The Empire Strikes Back as “Rey’s Lightsaber.”

This looks like a literal passing of the torch. “It’s about acknowledging the role the lightsaber plays in the film and the role she plays as the heroine, as well as the role she’ll play in the future,” Southern says, before quickly adding: “Although we don’t want to talk about the future too much.”  (Writer-director Rian Johnson’s Episode VIII begins filming this month.)

With this 10-figure collection of toys, exclusive to The Disney Store, fans get not only Rey, but also Gwendoline Christie’s Captain Phasma and Carrie Fisher’s General Leia Organa – who hasn’t yet been featured in playable form from the new film. (Another newcomer to the toy shelf is this grayer version of Harrison Ford’s Han Solo.)

While the roll-out was set months ago, Lucasfilm says they’re ready to deliver on the heroines – and villainess – of The Force Awakens. “We’ve made a real, intentional decision to not only focus on those female characters, but make sure that they are included in a way that’s commensurate with the role they play in the film,” Southern said.

There have been no shortage of Han Solo action figures in the past, but so far we've had nothing featuring the older, grayer, and (maybe a little bit) wiser smuggler and scoundrel. Hasbro's Black Series is much larger than the more play-friendly 3.75-inch figures, but for collectors these are some of the most coveted of the Star Wars figurines.

This figure is roughly the size of the crude X-Wing pilot doll Rey made and keeps on her shelf in the film. There's also a Finn figure this size, featuring him in his leather jacket. (I kind of want the eerie, Blair Witch-style pilot figurine, though.)

More collectibles, this time in a two-for-one deal. Or maybe it's all-for-one? As she embraces her fate and hidden powers, Rey weilds her blue lightsaber as she prepares for battle against Kylo Ren.

Rey and Captain Phasma are the duo included in this little-kid-friendly pack of cartoon-y action figures. Other pair-ups include Finn and the Stormtrooper FN-2199, Han Solo and Sidon Ithano (a.k.a. The Crimson Corsair) and Poe Dameron and BB-8.

Getting a little old-fashioned in terms of toys, but this is kind of adorable. BB-8 fits inside Rey, who fits into Poe Dameron, who nestles inside Finn in his Stormtrooper uniform, who is contained within the fearsome black cloak of Kylo Ren.

Maz Kanata still looks smaller than everyone else. This small-scale recreation of her castle-like watering hole comes with a Finn (ready to run away again), two Stormtroopers (including FN-2199, a.k.a. TR-8R, who battles him with an electro-staff weapon) and Kylo Ren, who has a removable mask — as well as removable hair.